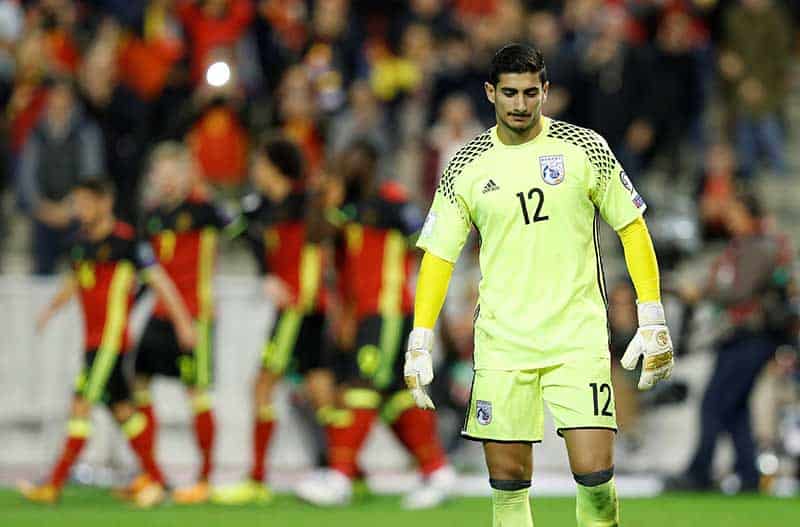 Cyprus’ Constantinos Panagi looks dejected at the end of the match

Cyprus ended their 2018 World Cup qualifying campaign with a 4-0 defeat against Belgium, finishing Group H second from bottom with ten points from as many games.

Neither side had much to play for with Belgium already having run away with the group and Cyprus with no hope of making the playoffs.

But Belgium were keen to end the campaign with a flourish as they had the added motivation of equaling Germany’s 43-goal tally, which they eventually managed.

Starting the evening on 39 goals, it did not take long for the home side to make it 40. With such a rich array of attacking talent, even without top scorer Romelu Lukaku in the lineup, Belgium took the lead via some assistance from Cyprus.

Vincent Laban played a pass to Kostakis Artymatas in a tight area but a quick press from Youri Tielemans saw possession change hands. The ball arrived at the feet of Eden Hazard who ran at the Cypriot defence before coolly placing the ball into the bottom corner from the edge of the box.

Unsurprisingly, it was one-way traffic in the opening half with the Cypriots camped in their own third.

Another sluggish exchange between Artymatas and Laban soon after almost saw the second goal of the game. Eden’s brother Thorgan capitalised on the error and a pass across the face of goal caused panic in the Cypriot defence, though fortunately there was nobody from the home side waiting to put the chance away.

Konstantinos Laifis, who plies his trade in Belgium with Standard Liege, looked to have Michy Batshuayi under control when Tielemans threaded a ball through to the stand-in frontman. Yet the Chelsea striker managed to win the ball with a slide tackle and then went close with a left-footed effort.

Cyprus were ultimately relieved to go into the break just one goal down, especially as Thorgan had a golden chance on the stroke of half time. The Borussia Mönchengladbach forward was through on goal but goalkeeper Constantinos Panagi made a good stop.

The second half started in similar fashion with Nacer Chadli crossing in for Thorgan who blazed over the bar with his weaker left foot.

But Thorgan was not to be denied with his third attempt. Batshuayi held off Giorgos Merkis to force Panayi into a good save but Thorgan was on hand to tap in the rebound for 2-0.

Cyprus finally began to venture out of their half, swinging in a couple of hopeful crosses from the wings and set pieces but to no avail.

The visitors’ audacity seemed to spark the home side back into life as they soon grabbed a third goal. Chadli took on Jason Demetriou down the right flank before his attempted cross was blocked by the hand of Merkis, leading the referee to point to the spot.

Eden Hazard made no mistake from the spot to make it 3-0, and gain the bragging rights over his brother.

Such is the strength in the depth of the Belgium setup, Roberto Martinez was able to bring on £90 million striker Lukaku in the second half, and the Manchester United man wasted no time in adding his name to the scoresheet.

It was a stern lesson for Cyprus and one that new boss Ran Ben Shimon will look to learn from as he moves forward with his team.

Other scores on Tuesday night were:

Cyprus needs to up its waste game says EC