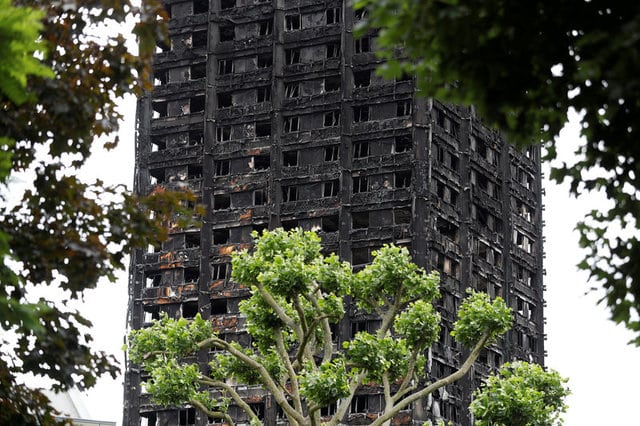 File photo: Damage to Grenfell Tower is seen following the fire in London

Illegal immigrants who survived a fire that killed about 80 people in a social housing block in London will be given a clear path to obtaining permanent residency in Britain, the government said on Wednesday.

The 24-storey Grenfell Tower, which was home to many immigrants and people from ethnic minorities, was gutted on June 14 in an inferno that started on the fourth floor in the middle of the night and engulfed the whole building with devastating speed.

The tower is located in a deprived estate within one of London’s richest boroughs, and the disaster prompted a wave of soul-searching about inequality and neglect of poor communities.

Some of the approximately 250 people who made it out of the building alive did not have the legal right to live in Britain and have been reluctant to make themselves known to the authorities.

The government had previously said that if they came forward, those people would be given leave to remain legally in Britain for 12 months — a stance criticised as ungenerous to people whose lives had been devastated by the tragedy.

“The government believes it is right to provide this specific group of survivors greater certainty over their long-term future in the UK, subject to … the necessary security and criminality checks being met,” Immigration Minister Brandon Lewis said in a statement.

Under the new policy, after the initial period of 12 months, Grenfell survivors would be able to apply for further periods of limited leave to remain, building up to five years. They could then apply for permanent residency.

Survivors have until Nov 30 to come forward and be granted their first period of limited leave to remain.

Sue Caro, a campaigner for Grenfell survivors, said the announcement was unlikely to make any difference to a group of people deeply suspicious of the authorities after years of anti-immigration government rhetoric.

“Why wouldn’t they grant these people indefinite leave to remain, rather than making them go through immigration procedures every 12 months that will be opportunities for the government to deport them?” she said.

Asked why permanent residency rights were not being offered now, a spokesman for the Home Office, or interior ministry, said the government had to act within immigration laws as they stood.

Martin Moore-Bick, chairman of a public inquiry into the fire, was among those who had asked the government to reconsider the previous policy, saying some survivors did not want to take part in his investigation because of fears over their long-term immigration status.

Caro said Wednesday’s announcement was unlikely to persuade people to give evidence.

“It won’t have the desired effect,” she said. “This is an attempt to pacify all sides and it achieves nothing.”

The Grenfell Tower fire prompted an outpouring of emotion from many Britons, who donated money and clothes to try and help survivors. But some people have also expressed negative views, saying that undocumented migrants should not be allowed to stay.

N.Korea says Trump has ‘lit the wick of war’