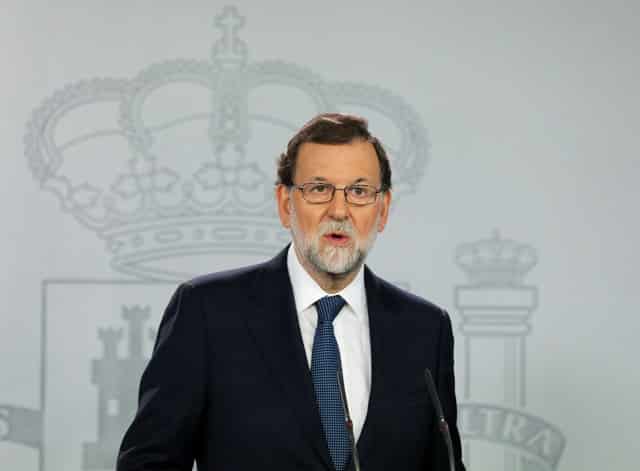 Spanish Prime Minister Mariano Rajoy on Wednesday gave the Catalan government eight days to drop an independence bid, failing which he would suspend the Catalonia’s political autonomy and rule the region directly.

His move could deepen the confrontation between Madrid and the northeastern region but also signals a way out of Spain’s biggest political crisis since a failed military coup in 1981.

Rajoy would probably call a snap regional election after activating Article 155 of the constitution that would allow him to sack the Catalan regional government.

Puigdemont issued a symbolic declaration of independence from Spain on Tuesday night but then immediately suspended it and called for negotiations with the Madrid government.

“The cabinet has agreed this morning to formally request the Catalan government to confirm whether it has declared the independence of Catalonia, regardless of the deliberate confusion created over its implementation,” Rajoy said in a televised address after a cabinet meeting called to consider the government’s response.

He later told Spain’s parliament the Catalan government had until Monday, Oct. 16 at 0800 GMT to answer. If Puigdemont was to confirm he did declare independence, he would be given an additional three days to rectify it, until Thursday, Oct. 19 at 0800 GMT. Failing this, Article 155 would be triggered.

It is not yet clear if the Catalan government will answer the requirement but it now faces a conundrum, analysts say.

If Puigdemont says he did proclaim independence, the central government will step in. If he says he did not declare it, then far-left party CUP would probably withdraw its support for his minority government.

“Rajoy has two objectives: if Puigdemont remains ambiguous, the pro-independence movement will get more fragmented; if Puigdemont insists on defending independence then Rajoy will be able to apply Article 155,” said Antonio Barroso, deputy director of the London-based research firm Teneo Intelligence.

“Either way, Rajoy’s aim would be to first restore the rule of law in Catalonia and this could at some point lead to early elections in the region.”

The stakes are high – losing Catalonia, which has its own language and culture, would deprive Spain of a fifth of its economic output and more than a quarter of exports.

Puigdemont had been widely expected to unilaterally declare Catalonia’s independence on Tuesday after the Catalan government said 90 percent of Catalans had voted for a breakaway in an Oct. 1 referendum. Central authorities in Madrid had declared the referendum illegal and most opponents of independence boycotted it, reducing turnout to around 43 percent.

Madrid responded angrily to Puigdemont’s speech to Catalonia’s parliament, saying his government could not act on the results of the referendum.

“Neither Mr. Puigdemont nor anyone else can claim, without returning to legality and democracy, to impose mediation… Dialogue between democrats takes place within the law,” Deputy Prime Minister Soraya Saenz de Santamaria said.

A spokesman for the Catalan government in Barcelona said earlier on Wednesday that if Madrid went down this road, it would press ahead with steps towards statehood.

“We have given up absolutely nothing…We have taken a time out…which doesn’t mean a step backwards, or a renunciation or anything like that,” Catalan government spokesman Jordi Turull told Catalunya Radio.

Spanish Socialist opposition leader Pedro Sanchez said he would back Rajoy if he had to activate Article 155 and that he agreed with the premier to launch constitutional reform within six months to address how Catalonia could fit better in Spain.

It was not clear how the Catalan government would respond to that offer.

Puigdemont’s speech also disappointed supporters of independence, thousands of whom watched proceedings on giant screens outside parliament before sadly leaving for home.

Financial markets, however, were encouraged that an immediate declaration of independence had been avoided.

Spain’s 10-year government bond yield – which moves inversely to the price – dropped 5 basis points to 1.65 percent in early trade, according to Tradeweb data.

At European Union headquarters in Brussels, there was relief that Spain, the euro zone’s fourth-largest economy, now had at least bought some time to deal with a crisis that was still far from over.

One EU official said Puigdemont “seems to have listened to advice not to do something irreversible”. The EU has been cool to Puigdemont’s calls for European mediation.

The Catalan crisis has deeply divided the region itself as well as the Spanish nation. Opinion polls conducted before the vote suggested a minority of about 40 percent of residents in Catalonia backed independence.

Some of Catalonia’s largest companies have moved their head offices out of the region and others were set to follow if Puigdemont had declared independence.