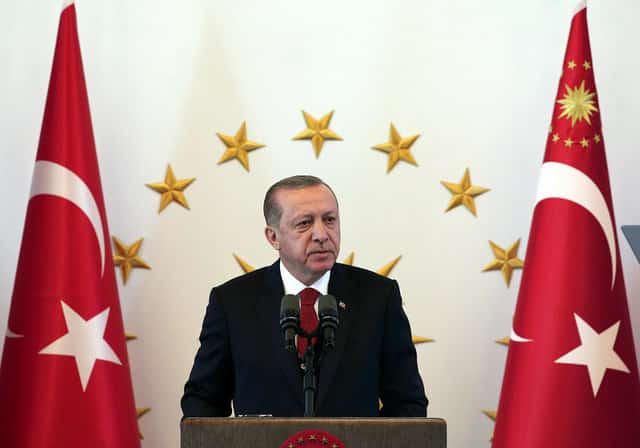 Turkish President Tayyip Erdogan accused the United States on Thursday of mistreating a strategic ally, in a blistering speech which appeared to rule out swift resolution to a dispute between two Nato members jointly fighting Islamic State.

Hours after Ankara announced officials would meet soon to settle differences, Erdogan accused the US consulate in Istanbul of hiding an individual with links to a network he blames for last year’s failed coup.

He also condemned US support for Kurdish fighters in Syria and separate US court cases against a senior Turkish banker and the president’s own security guards, mocking what he said was Washington’s claim to be “the capital of democracy”.

Turkey’s relations with the United States and many Western countries have been strained since last year’s failed military coup against Erdogan, in which more than 240 people were killed.

Turkey felt many allies were slow to condemn the coup attempt and failed to appreciate the danger it faced. Western countries have grown alarmed at the scale of Turkey’s post-coup crackdown, with 50,000 people detained and 150,000 suspended from work.

Ties with the United States hit a low when Turkey detained a locally employed worker at the US consulate in Istanbul last week.

The United States says it is still seeking an explanation for the arrest – the second detention of a consulate worker this year. It suspended most visa services in Turkey, saying it needed to review Turkey’s commitment to the security of its mission and staff. Turkey reciprocated within hours.

US Secretary of State Rex Tillerson spoke with Turkish Foreign Minister Mevlut Cavusoglu on Wednesday and expressed his “profound concern”, the US State Department said.

Erdogan has blamed outgoing US ambassador John Bass, saying he was putting at risk a decades-old alliance.

“Let me be very clear, the person who caused this is the ambassador here. It is unacceptable for the United States to sacrifice a strategic partner to an ambassador who doesn’t know his place,” Erdogan told provincial governors meeting in Ankara.

Earlier, Deputy Prime Minister Bekir Bozdag said Turkish and US officials would meet to work on resolving the crisis and described talks between their foreign ministers as constructive.

“On the one hand you say you are the capital of democracy, but you hide PKK and Feto members,” Erdogan said, using the label his government has given to Gulen’s network.

He said Washington was defending a “Feto-linked person hiding in your consulate”, and said a Christian pastor arrested in western Turkey last year was also “clearly linked” to Gulen.

Ambassador Bass said this week no one was hiding in the US consulate, and that he had seen nothing of merit in the charges against the pastor, Andrew Brunson.

Erdogan said US authorities had wrongly arrested the former head of Turkey’s majority state-owned Halkbank, and were trying to use a detained Turkish gold trader “as an informant”. Both men were arrested on charges of sanctions violations.

Referring to a US grand jury indictment of 15 Turkish security officials who clashed with protesters during his visit to Washington in May, Erdogan said most of them had never set foot on US soil. “You issue arrest warrants for 13 of my security staff who have never seen the United States,” he said.

“If the ambassador in Ankara is leading the grand United States, then shame on you,” Erdogan said. “Someone should have said: ‘You cannot treat your strategic partner this way, you can’t behave like this’.”

Strachan stands down as Scotland manager