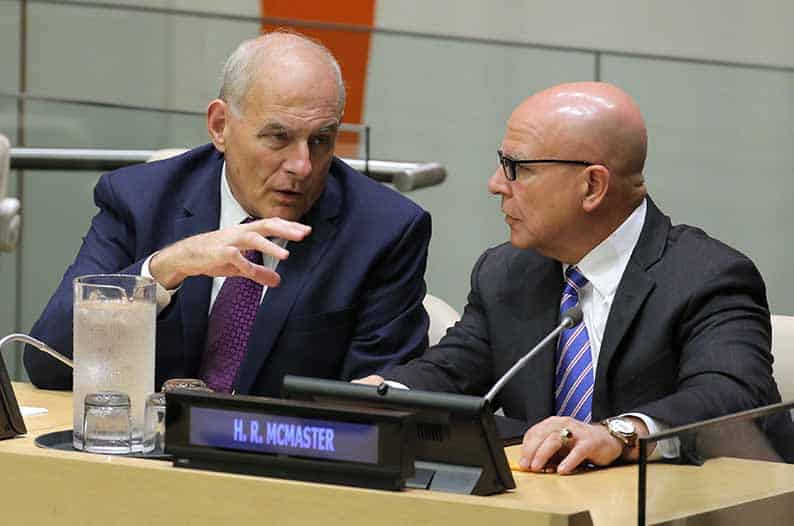 Here’s the scenario. Late one evening Donald Trump is watching Fox News and a report comes on that North Korea is planning to launch a missile that can reach the United States. (Kim Jong-un’s regime has said it is going to do that one of these days – but only as a test flight landing in the ocean somewhere, not as an attack.)

Trump misunderstands, and thinks Pyongyang is going to launch a missile at the United States. After all, there was a graphic with the report that shows the trajectory of the North Korean missile reaching the US, and Trump trusts Fox much more than his own intelligence services. So he orders all US strategic forces to go to Defcon 1: Defence Readiness Condition One – nuclear war is imminent.

The North Koreans spot all the unusual activity in the American forces – leave cancelled in Strategic Air Command, US nuclear subs in port sailing with zero warning leaving part of their crews behind, etc. – and conclude that an American pre-emptive attack is imminent.

The North Koreans go to their own equivalent of Defcon 1: mobilising and dispersing their armed forces, evacuating their leadership from the capital to some bunker in the countryside, and so on. American intelligence reports all this activity, and this time Trump actually listens to them. So he orders a disarming strike on all North Korean nuclear weapons and facilities. With US nuclear weapons, of course. Nothing else would do the job.

That’s how the Second Korean War starts. Not many Americans would be killed, and probably no civilians, because in fact North Korea doesn’t yet have any long-range missiles that can accurately deliver nuclear weapons on the United States, but millions would die in both parts of Korea. With luck, the Chinese would stay out even as their North Korean ally is reduced to rubble, but who knows?

It’s just a scenario, but it’s one that keeps many people awake at night – including many senior people in the US military. That’s why reports have been surfacing recently that the US Secretary of Defence, General James Mattis, the National Security Adviser, General HR McMaster, and Trump’s Chief of Staff, General John Kelly, have made a secret pact that all three will never be abroad at the same time.

Why not? Because at least one very senior military officer must always be in the country to monitor orders coming from the White House, and countermand them if necessary.

I cannot vouch for the accuracy of these reports, but I believe them. In fact, I was already assuming that some arrangement like that was in place. Mattis, McMaster and Kelly are serious, experienced and professional military officers, and it would be a dereliction of duty for them not to ensure that there is always at least one responsible adult between Trump and the nuclear button.

If one of these generals actually found himself in the position of having to stop Trump, he would face an agonising decision. All his training tells him that he must obey civilian authority, and he will certainly be court-martialled if he disobeys a presidential order. On the other hand, he must not allow millions of human beings to die because of a stupid mistake.

I’m sure they think about it, and I doubt that any of them knows which way he would actually jump if the situation arose. Providing adult supervision is a tricky business, especially when the child is technically your superior.

And having said all this, it occurs to me that some senior military officers in North Korea must face the same dilemma. They too have a child-man in charge, and they will be all too aware that if “little rocket man”, as Trump calls him, stumbles into a war with the United States, then they, their families, and practically everybody they have ever met will be killed.

Their dilemma is even worse, because they serve a petulant god-king who has the power of life and death over them and their families. To stop Kim Jong-un, if he were about to make a fatal mistake, they would have to kill him and accept that they would almost certainly be killed themselves immediately afterwards. Would they actually do that? They don’t even know the answer to that themselves, but I’m sure they think about it.

There is probably not going to be a Second Korean War. Probably neither set of senior officers is ever going to face this ultimate crisis. A subtle form of adult supervision is exercised on a daily basis in both capitals, because even the loosest of loose cannons has to work through other people in order to get his orders turned into actions.

But things have come to a pretty pass when we can have this discussion without sounding crazy.