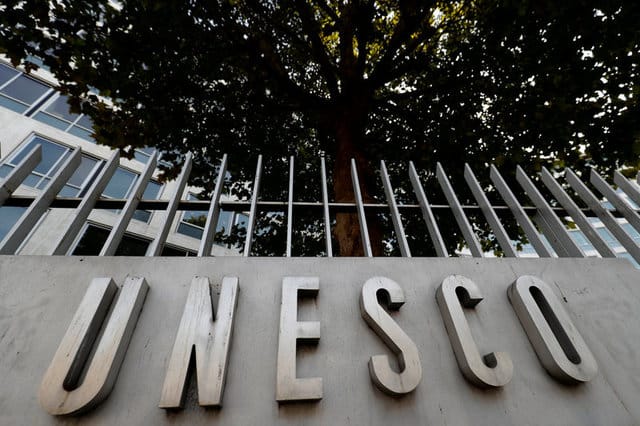 File photo: The logo of the United Nations Educational, Scientific and Cultural Organisation (Unesco) is seen in front of its headquarters in Paris

The United States and Israel announced on Thursday they were quitting the UN’s cultural agency Unesco, after Washington accused it of anti-Israeli bias.

The withdrawal of the United States, which is meant to provide a fifth of Unesco’s funding, is a major blow for the Paris-based organisation, founded after World War Two to help protect cultural and natural heritage around the world.

Unesco is best known for designating World Heritage Sites such as the ancient city of Palmyra in Syria and the Grand Canyon National Park.

“This decision was not taken lightly, and reflects US concerns with mounting arrears at Unesco, the need for fundamental reform in the organisation, and continuing anti-Israel bias,” State Department spokeswoman Heather Nauert said in a statement.

Unesco Director-General Irina Bokova expressed her disappointment: “At the time when conflicts continue to tear apart societies across the world, it is deeply regrettable for the United States to withdraw from the United Nations agency promoting education for peace and protecting culture under attack,” she said.

Washington has already withheld its funding for Unesco since 2011, when the body admitted Palestine as a full member. The United States and Israel were among just 14 of 194 members that voted against admitting the Palestinians. Washington’s arrears on its $80 million annual dues since then are now over $500 million.

Although Washington supports a future independent Palestinian state, it says this should emerge out of peace talks and it considers it unhelpful for international organisations to admit Palestine until negotiations are complete.

In recent years, Israel has repeatedly complained about what it says is the body taking sides in disputes over cultural heritage sites in Jerusalem and the Palestinian territories.

“Today is a new day at the UN, where there is price to pay for discrimination against Israel,” Israel’s Ambassador to the United Nations Danny Danon said.

Netanyahu told world leaders at the UN General Assembly last month that Unesco was promoting “fake history” after it designated Hebron and the two adjoined shrines at its heart – the Jewish Tomb of the Patriarchs and the Muslim Ibrahimi Mosque – as a “Palestinian World Heritage Site in Danger.”

Under Unesco rules, the US withdrawal will become effective as of the end of December 2018. Three diplomats had told Reuters earlier on Thursday of the impending decision.

The organisation, which employs around 2,000 people worldwide, most of them based in Paris, has struggled for relevance as it becomes increasingly hobbled by regional rivalries and a lack of money.

Unesco, whose full name is the United Nations Educational, Scientific and Cultural Organization, is in the process of selecting a new chief, whose priority will be to revive its fortunes.

The US move underscores the scepticism expressed by President Donald Trump about the need for the US to remain engaged in multi-lateral bodies. The president has touted an “America First” policy, which puts US economic and national interests ahead of international commitments.

Since Trump took office, the United States has abandoned the Trans-Pacific Partnership trade talks and withdrawn from the Paris climate deal. Washington is also reviewing its membership of the Geneva-based UN Human Rights Council, which it also accuses of being anti-Israel.

“The absence of the United States or any large country with a lot of power is a loss. It’s not just about money, it’s promoting ideals that are vital to countries like the United States, such as education and culture,” a Unesco-based diplomat said, warning that others could follow.

For differing reasons, Britain, Japan and Brazil are among states that have yet to pay their dues for 2017.

Russia’s former envoy to Unesco told RIA news agency the agency was better off without the Americans.

“In recent years, they’ve been of no use for this organisation,” Eleanora Mitrofanova said. “Since 2011 they have practically not been paying to the budget of this organisation… They decided to exit – this is absolutely in line with Trump’s general logic today.”

Pancyprian school works being carried out with materials from north