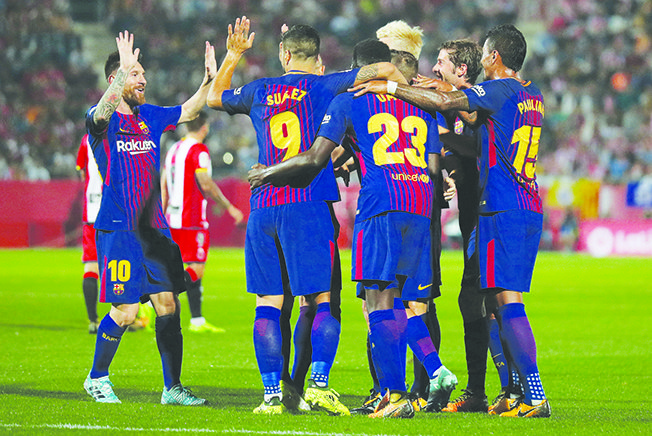 It will be the first time Barca have visited the Spanish capital since a disputed referendum on independence in Catalonia, with the atmosphere certain to be intensified by political fervour

Barcelona’s 100 per cent start to the Liga season will be severely tested at Atletico Madrid on Saturday in an atmosphere certain to be intensified by political fervour.

It will be the first time Barca have visited the capital since a disputed referendum on independence in Catalonia which has stoked tensions with the Spanish government.

As the Catalan region’s most famous export, Ernesto Valverde’s Barca side can expect an even more intimidating welcome from the Atletico fans than usual.

Barcelona captain Andres Iniesta said he had been affected by the uneasy atmosphere in the country and has called for a political solution.

“No-one likes that we’ve reached a situation whereby people are at each other’s throats because they carry different flags,” he said in an interview with Catalunya Radio.

“It’s a difficult situation and those in charge need to resolve it… No-one can be comfortable with this situation, you can’t ignore what’s been going on.”

The political tension has capped a difficult start to the campaign for Barca off the pitch.

Barca’s board, heavily criticised for their lack of transfer activity in the close-season after selling Brazil striker Neymar, faced a campaign to force a motion of no confidence in them, which ultimately failed.

They have also suffered with injuries and lost record signing Ousmane Dembele to injury for four months and had to make do without striker Luis Suarez at the start of the campaign.

On the pitch, however, things could not have gone better as the Liga leaders sit five points ahead of nearest challengers Sevilla following seven consecutive wins.

They will face their toughest opponents since the season began in Atletico, who are fourth in the standings, six points off Barca but also unbeaten.

Barca forwards Suarez and Lionel Messi could be feeling the strain of long journeys back from South America after firing Uruguay and Argentina respectively to the 2018 World Cup.

Iniesta, meanwhile, is fighting to return from injury in time.

“This is a different game for many reasons, our players have just come back from international duty, we’re facing a team that demand 200 percent of you but this is a huge game and we need to enjoy it,” Iniesta said.

Champions Real Madrid, who will make the short trip to neighbours Getafe on Saturday, have made a slow start to the season and are fifth, seven points behind their fierce rivals Barca.