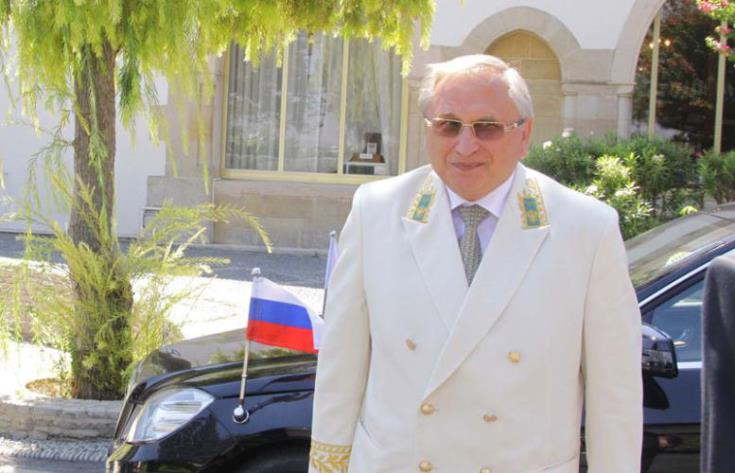 “Browder applied to your court and we believe that days before President (Nicos) Anastasiades’s visit (to Russia) this is rather not that good for our bilateral relations,” Osadchiy was quoted as saying by CNA.

The Russian diplomat, who was commenting to the press in the context of the Cyprus-Russian Business and Investment Forum in Limassol, said that the whole issue “is not a disagreement with Cyprus; it is a disagreement between Russia and Browder”.

“He has stolen a lot of money from the Russian company Gazprom and we are trying to figure it out, and I think we will succeed,” he said and added that the case is being trialled in a Russian court.

With an emergency injunction in Cyprus, investor-turned-activist Browder wants to force the Cypriot authorities to terminate their cooperation with Russia in a probe against Cypriot subsidiaries of Hermitage Capital. Russia launched the investigation against Browder in response to the latter’s international campaign for justice for Russian lawyer and accountant Sergei

Magnitsky, who died in a Russian prison tortured and deprived of medical care eight years ago. Magnitsky was arrested by the same police officers he implicated in a $230m (€194m) tax theft. Part of the money has been laundered through Cyprus.

Two years ago, Cypriot police raided the office of Browder’s previous lawyers, accompanied by Russian police officials. Interpol has repeatedly dismissed Russia’s requests for cooperation and the Council of Europe asked its member states in 2014 not to cooperate with Russia and instead take targeted measures against individuals implicated in Magnitsky’s death similar to those provided in the US Magnitsky Act.

Osadchiy said in response to a question whether he shares the displeasure of Russian authorities that “when we say displeasure, we mean that we don’t like that this issue occurred at this moment”.

On Tuesday, Russia’s Ministry of Foreign Affairs said that it had ‘serious doubts about the legality of the decision’ of the Cyprus court urging the government to hold off on further action pending its hearing of Browder’s injunction, which was ‘in stark contrast to the level and nature of bilateral relations’. This prompted the Cypriot Minister of Justice to respond with assurances that Cyprus would continue cooperating with Russia in the area in question after having suspended the joint investigation temporarily, “respecting the judicial procedure”.

On Wednesday, Osadchiy turned down a request for comment when contacted by the Cyprus Business Mail.

The Cyprus Business Mail understands that the decision to temporarily suspend legal cooperation with Russia in its retaliatory probe against Browder was conveyed verbally to Osadchiy, after judge Ioannis Ioannides of the

Nicosia District Court told the government’s lawyer at a court hearing on Oct. 4 that he expected that the government would not pre-empt the court’s decision. The next hearing is scheduled for November 6.

In 2014, the Russian ambassador publicly criticised Cypriot historian and researcher Makarios Drousiotis after the latter published a book which demolished the impression that Turkey’s 1974 invasion on the island was a US plot and instead showed that the Soviet Union encouraged it to send troops to the island in response to a Greek coup. Drousiotis was an advisor to President Anastasiades at the time.

In December last year, Osadchiy was the only diplomat who attended an anti-settlement seminar organised by opposition parties Diko, Edek, Solidarity, Greens and Citizens’ Alliance.

President Anastasiades is scheduled to visit Moscow in nine days.

“We are expecting with anticipation the President’s visit and we believe it will be important,” Osadchiy said and added that “we will discuss political issues, with the Cyprus problem on the top of the agenda, ties to Turkey and Cyprus and issues of mutual interest such as the economy”.

Osadchiy added that after the recent meeting of the joint-committee for economic cooperation early this month, the two sides are planning to sign up to six agreements.

“Our trade volume is increasing, we have more investment and the fact that Cyprus is number one in terms of investment in Russia means that our capital comes here and returns to Russia to invest,” he said.

The Russian diplomat said that the sale of the S-400 surface-to-air system to Turkey which occupies the northern part of Cyprus “has nothing to do with Cyprus” and, anyway, the sale has not been finalised yet.

The force of the cosmos twirls in paint