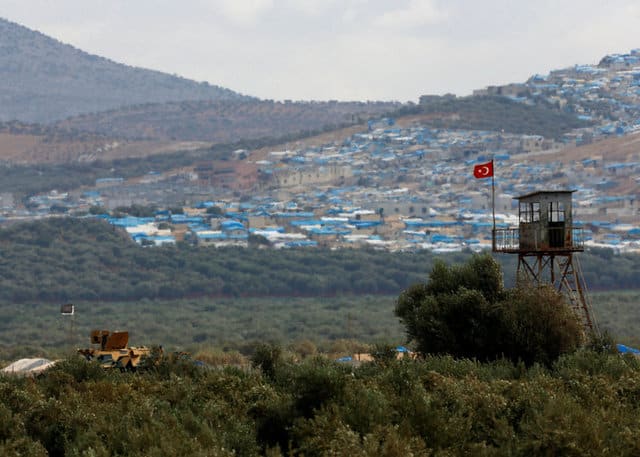 Turkey’s military announced on Friday it had begun setting up observation posts in north-west Syria’s Idlib province, part of a deployment that appears partly aimed at containing a Kurdish militia.

Turkey says its operation there along with Syrian rebel groups it backs is part of a deal it reached last month with Russia and Iran in Astana, Kazakhstan, to reduce fighting between insurgents and the Syrian government.

The military said its forces in Syria were carrying out their duties in line with rules of engagement agreed with Russia and Iran.

However, the deployment is also intended to rein in the Kurdish YPG militia, which holds the adjacent Afrin region, a senior rebel official involved in the operation said.

“(It is) in line with Astana 6 resolutions to ensure the area is protected from Russian and regime bombing and to foil any attempt by the separatist YPG militias to illegally seize any territory,” said Mustafa Sejari, an official in a Free Syrian Army (FSA) rebel group.

Turkey sent a convoy of about 30 military vehicles into rebel-held north-west Syria through the Bab al-Hawa crossing in Idlib, rebels and a witness said.

The convoy was heading towards Sheikh Barakat, a high area overlooking rebel-held territory and the Kurdish YPG-controlled canton of Afrin, the witnesses said.

President Tayyip Erdogan announced the deployment on Saturday, saying Turkey was conducting a “serious operation” with rebel groups it supports, as part of the Astana “de-escalation” deal.

Turkey has been a big supporter of rebels fighting Syrian President Bashar al-Assad throughout the war. But since last year Ankara has focused on securing its border, both from jihadists and from Kurdish forces that control much of the frontier area inside Syria.

Sejari, the rebel official, said it was important to contain the YPG to prevent it attempting any new military offensive to reach the Mediterranean, something that would require it to capture swathes of mountains held by rebels and Syria’s army.

“Today we can say that the dream of the separatists to reach the sea and enter Idlib and then to Jisr al-Shaqour and the coastal mountains has become a dream,” he said

Turkey regards the YPG as an extension of the PKK, a Kurdish group inside Turkey that has been waging armed insurgency against Ankara for three decades.

As the strongest part of the Syrian Democratic Forces (SDF), the YPG has received military aid from Turkey’s Nato ally the United States, as part of Washington’s campaign against Islamic State.

Last year, Turkey launched the Euphrates Shield operation, an incursion into northern Syria alongside Syrian rebel groups to take territory on the frontier from Islamic State.

That operation was also aimed at stopping the YPG using its own advances against IS from linking Afrin with the much larger area it controls in north-eastern Syria.

In the area taken by the Euphrates Shield campaign, Turkey has made changes to local governance that indicate it may be laying a foundation for long term ties with that part of Syria.

The Astana agreement with Assad’s foreign allies Russia and Iran involves reducing fighting in several regions of Syria, including Idlib and adjacent swathes of the northwest, the most populous rebel-held area.

Tahrir al-Sham, a powerful jihadist alliance that controls much of that territory, is not party to the de-escalation deal, and is at odds with some of the rebel groups that Turkey supports.

However, its forces gave an escort to the Turkish convoy late on Thursday, witnesses said, indicating that there might not be any fighting between them.

Trump expected to make US move against Iran nuclear deal