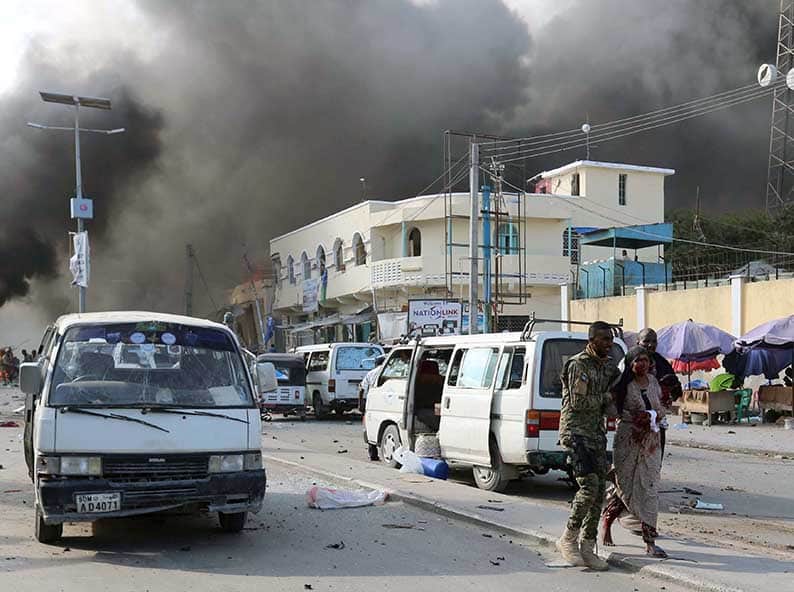 A Somali government soldier evacuates a woman, injured during an explosion, in KM4 street in the Hodan district of Mogadishu

The first explosion – in the city’s K5 Junction area which is lined with government offices, hotels, and restaurants – destroyed several buildings and set dozens of vehicles on fire.

“We know that at least 20 civilians are dead while dozens of others are wounded,” said Abdullahi Nur, a police officer who was in the area.

“The death toll will surely rise. We are still busy transporting casualties,” he said, adding that there were bodies under the rubble.

“It was a car bomb. Two civilians were killed,” Siyad Farah, a police major, told Reuters, adding that a suspect had been caught on suspicion of planting explosives.

There was no immediate claim of responsibility, although the Islamist al Shabaab group has carried out regular attacks

The al Qaeda-allied group is waging an insurgency to topple the weak U.N.-backed government and its African Union allies and impose its own strict interpretation of Islam.

They frequently launch gun, grenade and bomb attacks in Mogadishu and other regions controlled by the federal government, though in recent years the militants have lost most territory under their control to African Union peacekeepers and government troops.

Every artist beats to their own drum