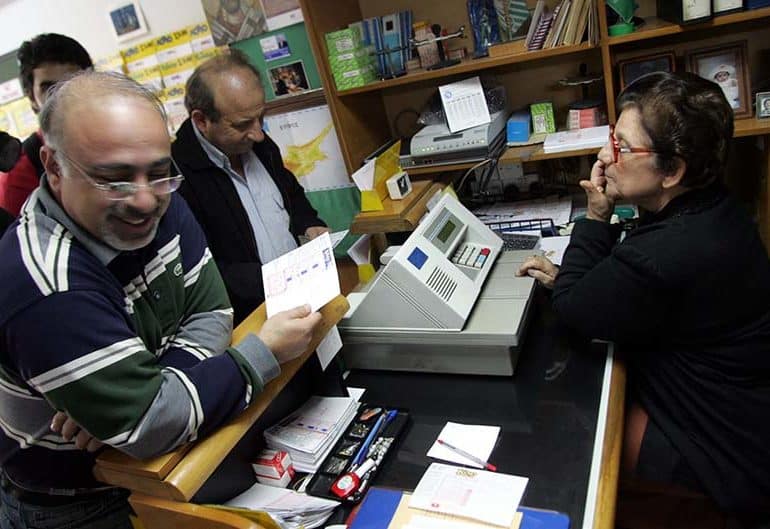 Most tickets are now sold in kiosks

From the peddlars who sold the tickets to the glamorous Irene Charalambidou who announced the winning numbers every Saturday night on TV, the state lottery was once a fixture of Cyprus life.

For decades it was one of the few highly regulated forms of gambling allowed and was therefore immensely popular.

In recent years, sales have plummeted due to competition from Greek gambling giant, Opap, and online gambling companies, while the soon-to-be-established casino will seize even more players.

Government’s plans to privatise the lottery will pose yet another challenge if they are ever carried out.

The Cyprus state lottery was initially introduced by the British in 1958 but just three draws took place before it was suspended. The first draw was on February 15 and the second in April. However, Eoka, fighting for the end of British rule, was quick to call on the Cypriot public to sabotage the lottery because all proceeds were going to the British government at the time. People stopped buying tickets and after the third draw, the operation ceased.

Soon after the independence in 1960, the new government revived the lottery based on legislation drawn up by the British. From August 1961 a draw took place once a month consisting of 80,000 tickets at 250 mills (1/4 of a Cyprus pound) each.

“The winning ticket was CYP 5,000, a huge amount in the 1960s,” head of the state lottery Marios Constantinou told the Sunday Mail.

At the time there were only street vendors, whereas now many tickets are sold in kiosks.

“The main purpose at the time the lottery was introduced was to help beggars and disabled people who couldn’t do any other jobs,” Constantinou explained. “In those days, there were no social benefits and it was a way for the government to support them.”

This is still the case, up to a point. While pensions, a minimum wage and other state benefits are mandatory, according to the lottery director there are still needy people who need the cash from selling tickets. Most, however, are now sold in kiosks.

The law stipulates that the government is not allowed to sell tickets, thus they are sold via 20 agents such as the disabled association after deducting a 10 per cent commission. The agents pay for the tickets up front and sell them to the public through the approximately 500 sub-agents such as street vendors and kiosks, retaining about 2 to 3 per cent of the commission for their expenses and profit, while the other 7 or 8 per cent go to the vendors who have to do the work.

For the traditional draw numbers lottery, 50,000 tickets are issued at €2 each, with a top prize of €50,000. As people tend to buy more tickets at Easter and Christmas, when they are in holiday mode and have more money, two extraordinary draws are held each year with 100,000 tickets each.

Scratch cards were introduced in 1979 and there are now six types of instant lottery tickets, standard, mini, super mega, bingo and gold with top prizes ranging from €5,000 to €400,000.

Competition from Opap and other international companies is fierce and while the chances of winning are lower, the advertising suggests differently.

“If you listen carefully, they are often talking about winners in Greece or even Spain,” one lottery player said. “There are so many people playing, so how can you win?”

But some Cypriots have.

in February this year a Cypriot from Limassol did win over €16m on the Opap lottery, Joker, the highest amount ever collected by a single winner. Following 16 consecutive jackpots on Joker, the Limassol resident guessed the 5+1 numbers correctly, winning some €16.4m by paying just €3.

The changes over the years are not all about monetary benefits but are also of a social nature.

“There are definitely fewer sales than years ago. Now anybody goes on the internet and only he knows how often he plays, how much he wins or loses,” kiosk owner Michalis Yiangou, 50, said.

“When I was in the army we used to buy tickets and compare the numbers and have a laugh,” Christos Christou, 45, said. “It is different when you go into a betting shop. There you stay longer and you are likely to pay back what you have won.”

“Years ago every Saturday night everybody would sit and watch the popular show Efharisto Savvadovrado (Pleasant Saturday evening) with Irene Charalambidou. The big moment was the moment of the lottery,” Yianna Christodoulou remembers.

“Back then you got tickets for 50 cents. Now the money is bigger as we have Opap and Joker and others but it is still not any easier to win.”

“I only played because there was this handicapped man selling tickets whom I wanted to support. When he retired I lost interest,” Nicos Ioannou, 63, commented.

It was a personal matter for the sellers, too.

“My grandfather was a ticket seller and used to spread out the tickets on the bed in the evening. He knew exactly which of his clients wanted how many and what numbers. In the morning he used to go around and give them personally to each client,” George Psyllides recalls. “My uncles were trying to convince him to buy a kiosk and work from there. But he wanted to walk.”

While the private companies are big payers, they provide few benefits for society. The state lottery is different.

“The net profit from the lottery operations, 37 per cent of the ticket money is transferred to the consolidated fund and used for development projects by the government,” Constantinou said.

Yet, the government wants to privatise the state lottery, hoping to make more profit.

It is unlikely that they will, as the net profits from Opap, which is a huge organisation, are not more than those of the state organisation, which, due to the government’s plans to sell has been unable to expand or advertise for the past four years.

Potential buyers will also have in mind that there will soon be a huge casino in Cyprus, which means more will have to share the pie of Cypriot players.

The finance ministry on August sent to parliament the bill on the privatisation of the state lottery, aiming at transferring operations to a private investor for 15 years under the supervision of the National Betting Authority.

The bill, which was approved by the cabinet, provides for the granting of exclusive rights to a private investor. It also regulates the organisation, operation, and supervision of national lottery games forbids unauthorised lotteries and imposes restrictions on prize competitions.

However, this is just a first step. In order to make changes, parliament still has to approve and the European Commission must consent to any changes.

The history of lottery

Playing lotto probably originated in China. The first recorded signs of a lottery are keno slips from the Chinese Han Dynasty between 205 and 187 BC. These lotteries are believed to have helped to finance major government projects like the Great Wall of China.

Just like in Cyprus, one purpose of lotteries involving money was to help the poor in Europe in the past. When they started in medieval times money was also raised for public works such as town fortifications. They were a popular form of taxation in countries like the Netherlands, where lotteries caught on early.

In France the first lottery draw was in 1539 and in England in 1569. Though the idea was quickly abandoned in France, it remained popular in England and later in America where they were introduced at the time when the country was an English colony.