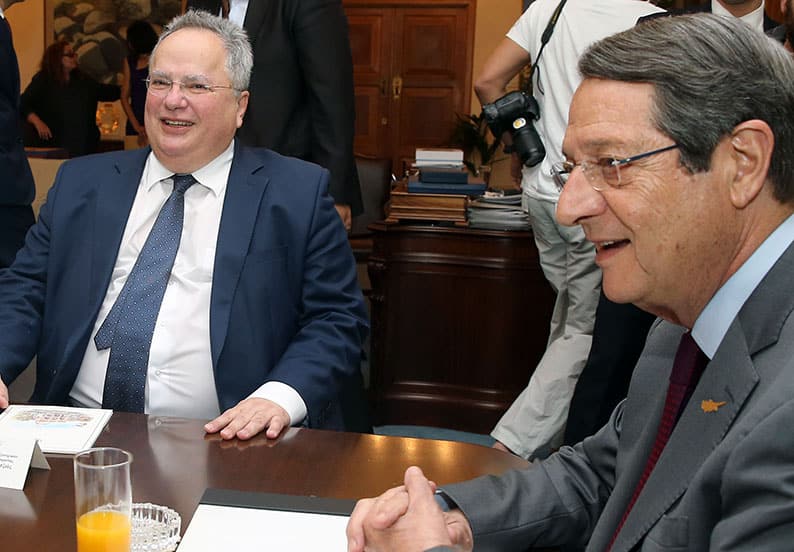 Cyprus' President Nicos Anastasiades (R) and Greek Foreign Minister Nikos Kotzias (L) sit for talks during a meeting at the Presidential Palace in Nicosia, Cyprus, 18 July 2017. According to media reports, Kotzias'visit is aimed at finding new approaches for the Cypriot reunification talks with the Turkish Cypriots. EPA/KATIA CHRISTODOULOU

The British economist John Maynard Keynes who predicted another war if the Allies imposed oppressive reparations on Germany after World War I is also credited with many wise remarks of universal application. The most appropriate of them following the debacle of the Cyprus talks in July at Crans-Montana is, ‘when the facts change I change my mind’.

A sea change has taken place in the political climate in Cyprus since 2004 that requires the nature of the comprehensive settlement envisaged by the terms of Cyprus’ Treaty of Accession to be reconsidered now that a federal settlement is not going to happen. This sea change compels a change of policy at the EU Commission –  the institution responsible for compliance with the EU legal order by member states – and in due course even treaty change.

In 2004 it was necessary to suspend the EU legal order in areas not controlled by the Republic of Cyprus pending a comprehensive settlement after the Greek Cypriot community voted against the settlement that would have allowed Cyprus to join problem-free. Different considerations apply, however, if there is not going to be a settlement at all.

After the Charter of Fundamental Rights of the European Union that binds all institutions of the EU to afford all EU citizens equality and protection from discrimination was given full legal effect by the Treaty of Lisbon in 2009, EU institutions are under a duty to ensure the Turkish Cypriot community has all the benefits of membership free from all forms of discrimination.

EU thinking on Cyprus as exemplified in the 2004 Treaty and Protocol of Accession is based on the idea that a comprehensive settlement of the Cyprus problem was going to occur soon and would involve a federal settlement similar to the Annan plan of 2004.

A federal settlement that necessarily involves power-sharing is no longer on the cards.

As Mustafa Akinci said after Crans-Montana, the Greek Cypriots –  people and leadership – do not want to share power. Not only is he right in his assessment, but the Greek Cypriots made this plain in the crucial referendum of 2004 when 75 per cent voted against a federal solution.

Just to remind readers, in 2004 the EU was driven to concede that it could not insist on a settlement of the Cyprus problem prior to Cyprus’ accession into the EU, but it insisted on best endeavours to solve it prior to accession and obtained a collective undertaking from Cyprus’ political leadership that the government of Cyprus would support a UN plan that was being hatched informally with the EU to enable Cyprus to join as a united entity –  the Annan plan.

The Annan plan was supported by former president Glafcos Clerides, Greek prime minister Costas Simitis who, together with Cyprus’ chief negotiator ex president George Vasiliou, managed to navigate Cyprus’ difficult negotiations to a successful conclusion. They all supported the plan with a passion, as did Nicos Anastasiades who campaigned vigorously for a yes vote, sending letter after letter to the EU exposing the iniquities of the no supporters who were in control of most media outlets. The Turkish Cypriots demonstrated and voted overwhelmingly in favour. As Shakespeare tells it in Julius Caesar ‘there is a tide in the affairs of men which, taken at the flood leads on to fortune; and we must take the current when it flows.’ Alas we did not.

Interestingly no one then seemed to mind that the Annan plan preserved the treaty of guarantee. It was going to apply to the new state of affairs notwithstanding Cyprus’ accession into the EU and no one raised an eyebrow. Not Anastasiades – who shamelessly made such a big song and dance about guarantees at Crans-Montana – and not any minister of the Greek government.  But more significantly not even president Papadopoulos who was much smarter than Anastasiades and more of a legal eagle. He knew that the treaty of guarantee was small fry compared to what the Cyprus problem is really about which is how to preserve Greek Cypriot control of the sovereignty of the Republic of Cyprus internationally.

The British handed over sovereignty to both communities jointly. The Turkish Cypriots were phased out and did not exercise their share of sovereignty in any capacity between 1963 and 1974; but then shot themselves in the foot by pointlessly declaring UDI in 1983. Papadopoulos was acutely aware of the legal consequences of this and was unwilling to let go of the exclusive Greek Cypriot control of sovereignty the Turkish Cypriot UDI left in its wake just in order to join the EU when it was not necessary to do so.

President Papadopoulos ruthlessly and successfully campaigned for the rejection of the Annan plan but not because of the treaty of guarantee. He reneged on the collective undertaking to support the UN plan primarily on the grounds that the Greek Cypriots would have had to share sovereignty with the Turkish Cypriots. He skilfully presented this as giving up his beloved Republic of Cyprus, which was a bit rich considering he had been a fervent supporter of union with Greece. I suppose when the facts changed he too changed his mind.

Zero guarantees and zero troops is therefore a new fruit. It is a meaningless slogan devised by the Greek foreign minister, Nicos Kotzias, for reasons that probably have nothing to do with the Cyprus problem. He appears to have plagiarised the use of zero as an adjective from Ahmed Davutoglu’s tome called Strategic Depth in which Davutoglu propounds his zero problems with neighbours policy: a lot of waffle to state the obvious fact that states should try and be on good terms with neighbouring states. As the Greek Cypriots say sarcastically efotisen mas –  he enlightened us.

After showing no interest at all in the Cyprus problem during the entire two years of negotiations along comes this guy with an irrational slogan and the Greek Cypriots buy into it unquestioningly. Since when has any country refused an offer of withdrawal of troops and land for peace? Game changing troop withdrawals and implementation guarantees in place of rights to unilateral action were rejected for no good reason.

But not all is lost. The treaties upon which the Republic of Cyprus was set up have not changed although the facts on the ground are very different from when the treaties were agreed. The treaties of establishment alliance and guarantee are still law. So also are the Treaties and Protocol of Accession of 2004 and the EU Charter of Rights and so is the Cyprus Constitution, which was amended to give supremacy to EU law domestically. Although international law is not strictly law in the same way as when it is incorporated domestically ‘almost all nations observe almost all of their obligations in international law almost all of the time.’

Politics is the art of the possible. If the Cypriots are unwilling or unable to share power, there are legal mechanisms in place which, with a little help from the EU, could enable the Turkish Cypriot community to benefit fully from Cyprus’ membership of the EU.

Perhaps it is time to give the EU a decisive role, not so much in solving the Cyprus problem, but in ensuring that all EU citizens resident in Cyprus are able to benefit from all the incidents and advantages of membership of the EU.

My agonising eight-hour wait in casualty

Our View: Presidential candidates are all representatives of the ancien regime