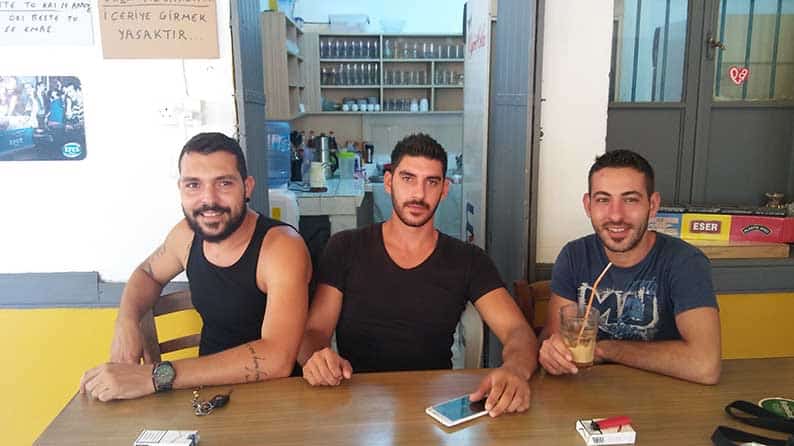 If living in Rizokarpaso has been a challenge down the decades for those Greek Cypriots who stayed put after the 1974 invasion, it must rather more so for three men from Limassol who moved there only recently.

The large coffee shop in Rizokarpaso, across from the Ayios Synesios church, is now run by three brothers-in-law, all from Limassol, who decided to settle there after marrying three sisters from the village.

While living in Rizokarpaso is not easy, the three brothers-in-law say they have easily adapted and would like to remain there permanently if conditions allow.

The first to settle was Panayiotis Charalambous, 29, who has been a Rizokarpaso resident for the last seven years while Markos Tsierkezos, 26, followed suit a year later. The third brother-in-law, Haris Hadjipetrou, 33, moved there three years ago.

“We met three sisters whose family is enclaved from Rizokarpaso. Their parents stayed in the village after the war but moved to Limassol for two years when the Greek schools closed down in Rizokarpaso for their daughters to go to school,” Charalambous said.

After the schools re-opened, he said, the family returned to the Karpas, but the three girls then went back to Limassol after finishing high school to study. But one by one, they decided to finally return to their ancestral land, along with their husbands.

All three men said they initially went to Rizokarpaso to see how they would like it and ended up settling there.

“I came up here to meet my in-laws and the place, experience their lifestyle and I liked it. Besides, I was passionate about this type of work (agriculture),” Charalambous said.

“Isn’t it what happened to all of us?” Hadjipetrou said.

Tsierkezos and his wife were forced to build a house because they couldn’t find elsewhere to live. The other two found old homes in the village which they renovated. Charalambous asked permission from other people from Rizokarpaso to let him renovate a home they were not using to live in, while Hadjipetrou was given a small house by a relative of his wife which they too renovated.

Life in Rizokarpaso – a mostly rural area – is not for those seeking a plush lifestyle the brothers-in-law say, adding that you need to become a Jack of all trades to make ends meet.

“You can’t call this an easy life. But you compromise with what the place has to offer,” Charalambous said.

Despite receiving a monthly allowance from the state as part of the government scheme to encourage resettlement in the Greek Cypriot and Maronite villages in the north, they need to also fish and farm to support themselves and their young families.

Tsierkezos has a two-year-old son, Charalambous has a three and a five-year-old and Hadjipetrou has a 15-month-old daughter.

Setting up a business is not easy in the north without a Turkish Cypriot business partner, and the men have had to be resourceful. Tsierkezos had tried in the past to open a shop offering car engine cleaning services but was stopped by the authorities.

“If you don’t pick up snails, asparagus and mushrooms to eat, things will be tough. If you don’t take care of your sheep, your field, if you don’t fish, make halloumi, bake bread, you will have a hard time to make ends meet up here,” Hadjipetrou said.

He added that they grow wheat, fava beans and vetch with their in-laws. “You do whatever you can. We are lucky we’ve also got the coffee shop,” he said.  The coffee shop belongs to the church which gave it to the three men to run.

The benefit of living in a rural area, Tsierkezos said, is that one can survive without a lot of money.

“Nature will provide for you. In cities, unfortunately, without any money, you cannot survive.” 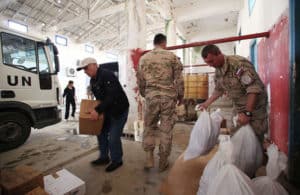 Although none of them had previous experience working the land, they have adapted to their new rural lifestyle.

“There are no cafes and bars. At night, we gather in each other’s houses. In the winter we light up the fireplace. We have a good time,” Hadjipetrou said.

The coffee shop has been embraced by the whole community, Greek Cypriots and the Turkish nationals that now live in the village.

“The youth of the village visits the coffee shop. There’s nothing that divides us,” Hadjipetrou said.

Our View: Presidential candidates are all representatives of the ancien regime

The real impact of north’s levy on food aid