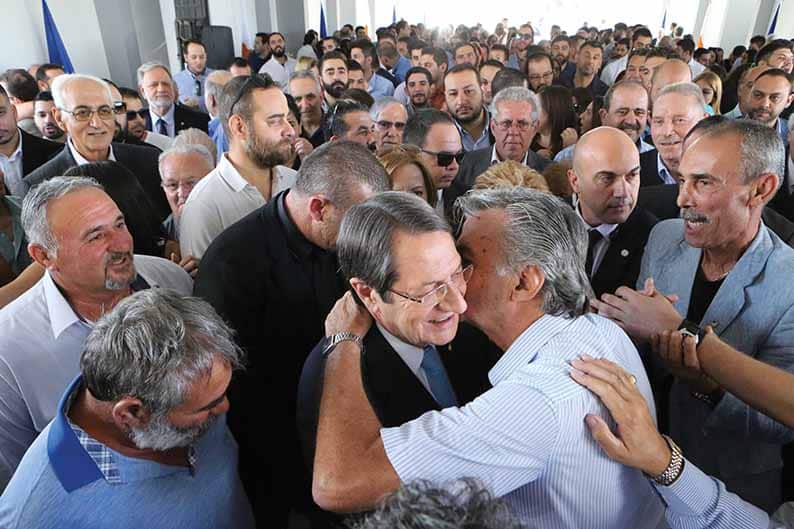 THE LINE-UP for the presidential elections was finalised yesterday after President Anastasiades officially announced his candidacy. With the Rector of the University of Cyprus, Constantinos Christofides, having announced on Wednesday that he would not be standing, we are left with the usual suspects in what is set to be a three-horse race.

Despite his public assertions that he will be in the second round of the election, the fourth candidate, Giorgos Lillikas is out of the reckoning. In all polls he has received less than 8 per cent, while in a poll that also included Christofides, Lillikas came last in the voters’ preference. The ultra-nationalists of Elam will have their own candidate as will the association of bank bondholders but neither will have an impact.

The candidates of the ancien regime – Disy, Akel, Diko, Edek – that has completely dominated political life since the mid-70s and from the ranks of which all presidents have come, will be fighting it out for the presidency. Nothing changes in Cyprus politics, which is why, apart from the occasional amusement provided by the exchange of personal insults between candidates and their parties, there has been very little to attract the voters’ interest. They have heard it all before and do not believe it, even though they will turn up to vote for someone, when the day arrives.

Not much separates the candidates, despite each one’s effort to differentiate himself from the others. Even on the number one issue of all past elections, the Cyprus problem, there is little separating the three main candidates, especially after Anastasiades refused to seize the opportunity to reach an agreement in Switzerland, where it became clear that, when it came to the crunch, he was as committed to a bi-zonal, bi-communal federation as Nicolas Papadopoulos.

It is an indication of Anastasiades’ audacity that after blowing the chance of a settlement in Crans-Montana, he is still posing as the pro-settlement candidate, constantly repeating, “I am ready for the resumption of the talks, within the framework of the parameters set by the UN Secretary-General, so as to safeguard everything achieved so far.” On Thursday he boasted that “for the first time we succeeded having at the same table the EU and the UNSG opposite Turkey, for the first time we put on the table the issues that constitute the core of the Cyprus problem.” Despite all this he spurned what the UNSG described as a “historic opportunity,” pretending that another “historic opportunity” will appear if he is re-elected.

Having earned the rejectionist title with his actions, the president undermined the position of Papadopoulos, who decided to take a harder line, one that guarantees there will never be talks with the Turkish Cypriots again. The irony, is that he has labelled his formula for preserving the status quo the ‘new strategy’ but it is an old strategy pursued by his father and Spyros Kyprianou with zero result. Akel’s candidate Stavros Malas, may have differentiated himself on the Cyprus problem, by criticising Anastasiades’ mishandling of the talks, but he has been afraid to take a clear pro-settlement stand.

Malas’ biggest mistake in the campaign, however, is that, despite declaring his independence, he is repeating Akel’s positions on the economy, which, justifiably, nobody trusts after the Christofias years. Will he tackle the growing poverty he has made a big issue out of, by bankrupting the state as Christofias did, increasing state handouts by €1 billion? And if he wants to appeal to the non-Akel voters, he cannot promote, in this day and age, the obsolete Soviet view of the state as the driver of economic growth.

There is as much chance of our monolithic, bureaucratic state driving growth as there is of Papadopoulos’ new strategy ending the occupation. Papadopoulos is also a supporter of the big wasteful state – most of Diko’s voters, after all, are employed by it – and his party has blocked all government privatisation initiatives. Anastasiades pursued privatisation only because it was part of the memorandum of understanding agreed with the Troika, but before the previous elections he had pledged not to privatise semi-governmental organisations.

There is very little separating the three candidates, who have a chance of winning the elections. Despite some minor ideological differences, they are all representatives of the ancien regime, the interests of which are best served by keeping things as they are. They all support maintaining the big interventionist state, which keeps their supporters in well-paid jobs and hampers economic development as well as preserving the division of the country, which ensures they do not have to share the spoils of power with the Turkish Cypriots.

When the facts change I change my mind