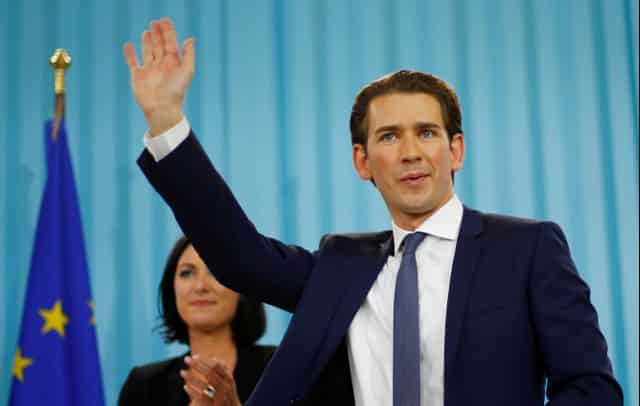 Austrians shifted to the right in Sunday’s parliamentary elections, giving the far-right Freedom Party a mandate to enter coalition talks with young conservative victor Sebastian Kurz, who fell short of a parliamentary majority.

People’s Party (OVP) chief Kurz, who is just 31, is on track to become one of the world’s youngest leaders after securing victory on around 32 per cent by taking a hard line on immigration that blurred lines with the Freedom Party (FPO).

Austria was a gateway into Germany for more than 1 million people during the migration crisis that began in 2015 and took in roughly 1 per cent of its population in asylum seekers in 2015.

Many voters said their country was overrun and the crisis helped buoy right wing parties.

The results put current Chancellor Christian Kern’s Social Democrats in second place but they could be dislodged by a record number of postal ballots. More than 889,000 were issued and those votes are to be counted by Monday evening.

Third place would weaken them in coalition talks.

Kurz’s party will probably need a coalition partner. An alliance with the FPO is the most likely option, although Kurz kept his options open.

“Neither a coalition with the FPO nor one with the SPO has been agreed,” Kurz told broadcaster ORF when pressed on his plans. “We have to wait for the result”

Any coalition between two of the top three parties is possible since the SPO has lifted a self-imposed ban on coalitions with the FPO. But if the Social Democrats come third it is unlikely to form an alliance with the FPO that would make its leader, Heinz-Christian Strache, chancellor.

Kern’s Social Democrats appear split on how to proceed after years of bickering with long-term coalition partner OVP made a centrist coalition all but impossible amid distrust of the far right.

Labour union association chief Erich Fogler told ORF radio the SPO should try to realise its goals in government rather than opposition.

But Kern seemed to distance himself from a fresh bid for centrist cooperation. “Of course we will not refuse to take part in talks,” he told ORF radio on Monday.

“I am concerned to a certain extent that we will not find common ground easily. That will require a very significant willingness from both sides to make compromises.”

Hans Niessl, Social Democrat governor of the province of Burgenland where he rules in coalition with the Freedom Party, echoed Vienna mayor and SPO left-wing firebrand Michael Haeupl’s comments that a tie-up with the FPO in Vienna was unlikely.

The president of the World Jewish Congress, Ronald Lauder, who was the US ambassador to Austria from 1986 to 1987, called for the Freedom Party to be kept out of government.

The FPO, which was founded by former Nazis but said it has left its past behind, has had to throw out party officials on a regular basis in Nazi-related scandals. Its sister parties are France’s Front National and Germany’s AfD.

“It is sad and distressing that such a platform should receive more than a quarter of the vote,” Lauder said in a statement. The Freedom Party, which says it has rid its rank of anti-Semitic elements, has said it shares an enemy with Israel in political Islam.

Postal ballots amount to one-sixth of ballots cast. Most should be should be counted by evening but a final count might not be available until Thursday.

A projection by pollster Sora showed the OVP winning with 31.6 per cent based on a count of all non-postal ballots. The OVP were at 26.9 per cent with the FPO at 26.0 per cent.

The projection had a margin of error of 0.7 percentage points, meaning the race for second place was too close to call.