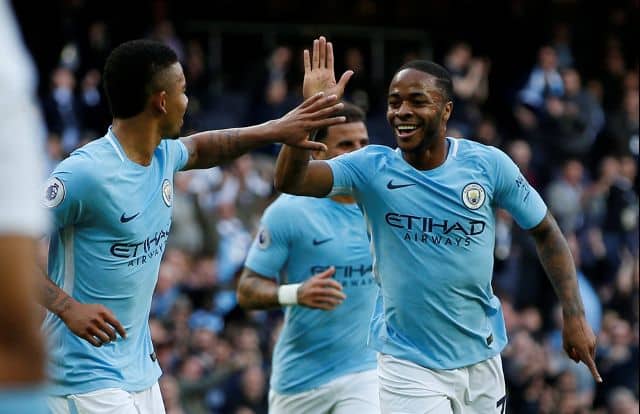 Manchester City winger Raheem Sterling says he is loving playing under Pep Guardiola for the Premier League leaders and admits that his life is also better for having tuned out critics on social media.

Sterling has scored six goals in five starts for City this season and has impressed with his overall contribution to Guardiola’s prolific attack which has struck 29 goals in eight Premier League games.

Ahead of tonight’s Champions League Group F clash with Italian Serie A leaders Napoli, Sterling said that Guardiola has undoubtedly improved him as a player.

“He has been massive for me especially with the basic and simple stuff and he always tries to get you do the simple stuff at a really top level and that is the genius thing about him and it works,” said the England international.

“It is really enjoyable. We are defending with the ball, not just without it. It is a great team to be involved in, especially the attacking play. There are always chances to score. We just need to keep on building and continue this through the season,” he added.

With City challenging for honours domestically and in the Champions League and with a World Cup in Russia at the end of the campaign this has the potential to be a defining season for Sterling.

“It is a massive year for me, for the team and I need to keep building, keep working hard and go to the World Cup on a positive,” he said.

Sterling’s inconsistent performances for England have made him the target of some critics in recent years, particularly after the exit to Iceland at Euro 2016. But the former Liverpool winger revealed that he no longer pays attention to online comments.

“My first year here, being really young, I used to always be on Instagram, you see stuff pop up and check it out because you don’t know any better.

“Since I have been getting those negative comments, I realise the best thing to do is not to look at it, that has been my thing for the last few years, don’t look at it so it won’t affect you,” he said.

While Sterling has become an integral part of the City attack this season, there was speculation that he might have left the club in a swap deal with Arsenal for Alexis Sanchez.

Guardiola has denied that was ever a possibility and Sterling said the reports hadn’t worried him.

“I didn’t need to speak to him because I already spoke to him in the summer about pre-season. I didn’t have any negative thoughts.

“I just woke up one day with England, seen it and didn’t believe a word of it until I heard something from the manager. It wasn’t something I was worried about because I think he is an honest guy I didn’t need to worry about it and didn’t think about it”.

Ed Sheeran has been involved in a cycling accident