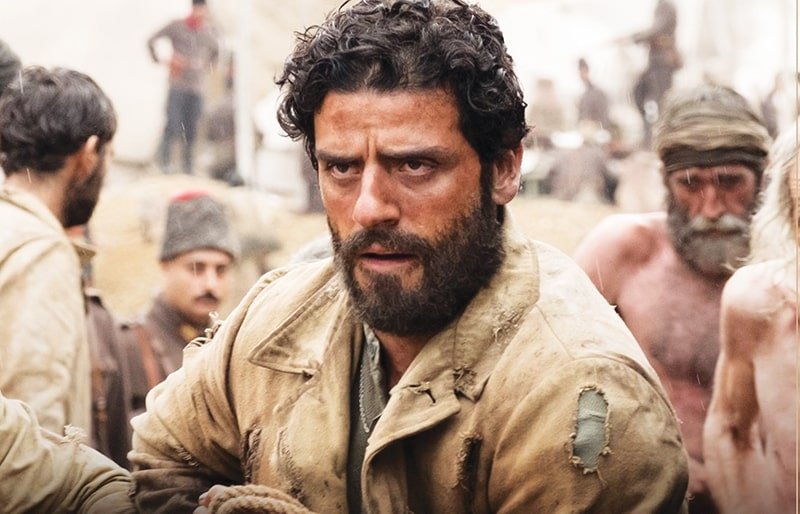 Let’s not beat about the bush: there are a handful of natural markets for The Promise, and Cyprus is one of them. This is a tale of Turks being beastly – and a tale of the Armenian genocide of 1915, which Turkey continues to deny (after its premiere, Turkish online trolls made a concerted effort to sink the film’s rating at the Internet Movie Database via thousands of fake reviews). It’s the second film on the subject in three years, after The Cut in 2014 – but The Cut was European whereas this is Hollywood, made by Armenian-Americans (including the veteran producer Kirk Kerkorian, who died before it came out) with the express hope of pleading their case before the American public.

There are two ways in which The Promise has its eye on the US market. The first is that all three American characters are unequivocally heroic, from two minor characters (a righteous ambassador and a priest who helps orphans) to Chris Myers, the reporter played by Christian Bale, who documents the atrocities at great risk to himself. At one point, he’s arrested by the Turks and informed that he’ll be executed that very night unless he signs a confession to being a spy – but he bravely refuses, sticking up for his principles and instead pressuring the film’s only ‘good’ Turk to intervene on his behalf. Myers survives; the Turk later comes to a sticky end, but the film seems to view that as a small price to pay.

The second way in which The Promise courts the American audience is in being presented very pointedly as a Holocaust movie, with Armenians as, essentially, Jews. Much is made of the fact that they’re merchants. Turkey’s WWI alliance with Germany is also noted, and obnoxious German officers actually appear in one scene singing ‘Deutschland Uber Alles’ (they, in the convention of such things, speak German; everyone else speaks English). Another scene finds our hero Mikael (Oscar Isaac) coming upon a cattle-car filled with captured Armenians, their hands reaching out poignantly through slats in the carriage – an image familiar from many a WWII movie. Where are they even being taken? Did they even have concentration camps during the genocide?

The film needs to be taken on its own terms, i.e. as a rather facile melodrama with occasional risible detail (hedonist Myers, preparing an evil-looking drink in an Istanbul absinthe bar: “Absinthe makes the heart grow fonder!”). The title is irrelevant – there is a promise, made by Mikael to his fiancée, but it barely features – while the plot mechanics have people criss-crossing Turkey in the middle of a war so they can be in the right place at the right time. “I need to go and talk to his family,” declares Anna (Charlotte Le Bon), setting out – but why? – for Mikael’s village where she reunites with her presumed-dead beloved. There’s a love triangle, Myers being the third party; some will say the genocide is trivialised by such Hollywood fluff. Yet The Promise is heartfelt, and – once accepted on its own terms – surprisingly well-acted by the male leads, with Isaac at his most soulful and Bale (despite some unfortunate Buffalo Bill facial hair) full of fiery idealism as an old-school journalist.

This is big-budget, two-hour-plus stuff, building to a pitched battle between Armenians and Turks, followed by a Titanic-style final flourish which may or may not be earned. Maybe it’s all too soft-centred. On the one hand, Mikael comes across a terrible sight, a pile of fresh corpses – dumped in the middle of the woods – which includes his fellow villagers and most of his loved ones; on the other, two of the victims turn out to be still alive, one of them being his cute little cousin, a bit of fakery designed to sweeten the pill for a mass audience. The Promise could’ve been the Armenian Schindler’s List, instead it’s more like the Armenian Doctor Zhivago (only less spectacular).

Does it matter? Overall, I don’t think so. The film has scope, going from the fleshpots of Istanbul to a kind of Armenian Kristallnacht – overlaid with Byzantine chanting, our heroes being in church when the carnage begins – to a mountain chain-gang to a journey back to the village, all this punctuated with columns of refugees, burned-down villages, hanged men with signs around their necks. Yet the tone is resilient rather than angry, which is why the film is finally touching (and will be even more touching to our thousands of Armenian Cypriots). “Our revenge will be to survive,” says Anna – and the epilogue makes it clear, Mikael in old-age makeup at some sort of banquet in America; “We’re still here,” he says simply in his speech to the gathering, followed by William Saroyan’s famous quote about Armenians being indestructible – “for when two of them meet anywhere in the world, see if they will not create a New Armenia”. If the aim is to persuade the neutral, mission accomplished.

Tourist arrivals up 15% in September, a new record