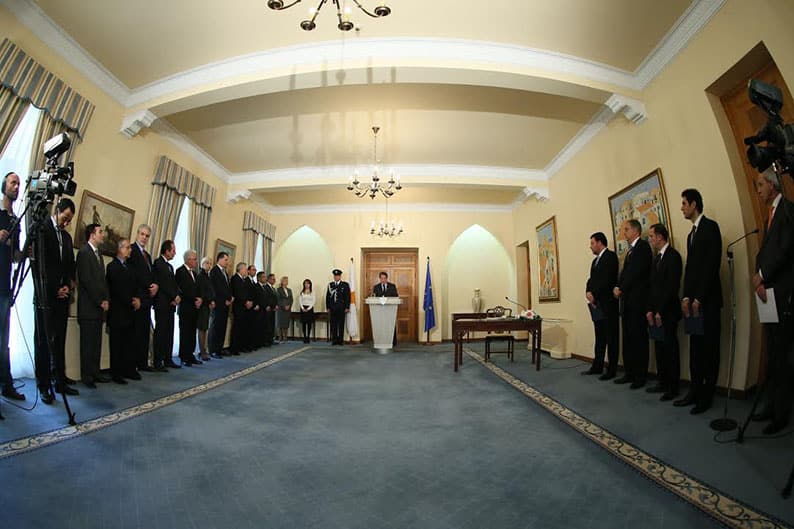 File photo of a cabinet almost totally comprised of men

Just one in 10 ministers in Cyprus is female, and all 39 mayors are men, according to a new study by the Council of Europe.

The report which is based on data from 2016 also states that last year the leaders of all political parties were men while 10 MPs or 17.9 per cent were women and 46 were men. The situation is slightly more in favour for women in the supreme court, where four women and nine men were employed.

As regards Cypriot ambassadors, two were women and 14 men and the overwhelming majority of municipal councillors, 2,063, were also men, while only 333 were women.

Cyprus is not the only country with major gender inequalities. “European countries are still struggling to achieve gender balance in public decision-making,” the report by the council’s Gender Equality Commission stated, adding that only two out of the 46 member states studied – Finland and Sweden – reached the 40 per cent minimum target for women’s participation in lower or single houses of parliament in 2016 with the average figure across Europe being 25.6 per cent. The minimum target was set by the Council of Europe’s Committee of Ministers in 2003.

None of the countries met the 40 per cent minimum target for upper houses of parliament; the average percentage of women among appointed members was 35.8 per cent and for elected members 23.9 per cent.

The average proportion of women heads of state and government, heads of regional governments and mayors across Europe was below 17 per cent.

“I urge all member states to take positive steps to improve gender balance in public decision-making as part of their wider efforts to boost gender equality in all walks of life.”

The report includes seven recommendations. It notes, inter alia, that Council of Europe member states should adopt strategies, policies and legislative measures to meet the 40 per cent minimum target, focusing on both problem areas and opportunities for progress.

Moreover, they should consider introducing or strengthening gender quota laws/parity systems or political party quotas as well as considering the advantages of proportional representation. They are also urged to include gender equality principles in relevant policy and legal frameworks, address gender bias in recruitment and selection practices and provide training for people involved and encourage relevant actors, notably political parties to introduce such measures.

Such measures should be part of a larger gender equality strategy, addressing issues across the board including women’s economic empowerment, violence against women and gender stereotypes, as gender balance cannot be reached in decision-making if other areas of life remain fundamentally unbalanced, the study concluded.

Tom Petty was laid to rest on Monday

Woman, locked in home, refuses to give up children