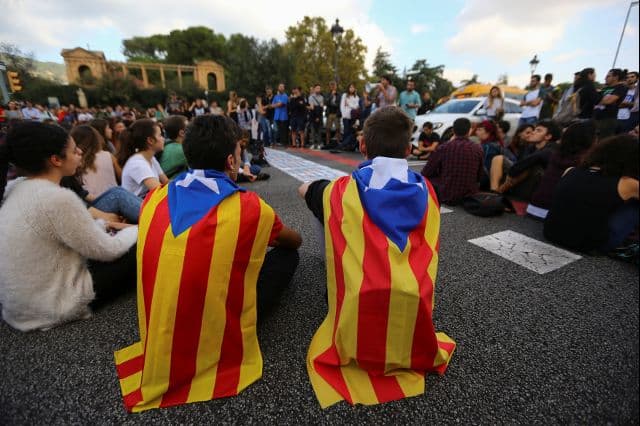 Catalonia refused on Tuesday to bow to the Spanish government’s demand that it renounce a symbolic declaration of independence, setting it on a political collision course with Madrid later this week.

The Spanish government has threatened to put Catalonia, which accounts for a fifth of the economy, under direct central rule if its government does not abandon independence by Thursday.

“Giving in forms no part of this government’s scenarios,” Catalan government spokesman Jordi Turull said. “On Thursday, we won’t give anything different than what we gave on Monday.”

The Catalan government accused Madrid of taking “political prisoners” and one of the groups has called for peaceful demonstrations around Catalonia on Tuesday, with the biggest expected to begin in Barcelona in the evening.

The phrase was an allusion to the military dictatorship under Francisco Franco, when Catalan culture and language were systematically suppressed. It carries an emotional resonance given fascism is still a living memory for many Spaniards.

Justice Minister Rafael Catala hit back saying the jailing of the leaders of the Catalan National Assembly and Omnium was a judicial, not a political, decision.

The crisis has deepened divisions at the heart of Spain’s young democracy, underlining the complex sense of nationhood in the euro zone’s fourth largest economy.

In Madrid, unionists drape their homes in the national flag, while Barcelona apartment buildings are festooned with Catalan flags. Street protests of hundreds of thousands of people have been held on both sides of the divide, including in Catalonia.

She said she and her colleagues would come out onto the streets if Madrid went ahead and took control of the region.

European capitals and financial markets have looked on with mounting alarm since Oct. 1, when Catalan authorities held a referendum on independence in defiance of a Spanish court ban.

That same incident also led to Catalonia‘s police chief, Josep Lluis Trapero, being investigated for sedition. He is accused of failing to order his force to rescue them from the building. He has not been detained but the High Court banned him from leaving Spain and seized his passport.

A string of companies, including two major lenders, have decided to move their headquarters outside Catalonia since the referendum.

Spanish police launched a violent crackdown in an effort to thwart it, using rubber bullets and batons on voters in scenes that shocked Spain’s European neighbours.

Catalan officials say 43 per cent of voters still managed to cast ballots with 90 per cent in favour of breaking away. Many unionists, however, obeyed Madrid and did not vote.

One of Catalonia‘s major foreign investors, Volkswagen, said on Tuesday that its Spanish division, Seat, had decided to delay announcing the name of its forthcoming model.

Seat, based in Martorell in Catalonia, had planned to announce the name of its 2018 sport-utility vehicle this month, about a year ahead of the 7-seat model’s launch.

“With the entire Spanish media focused on politics at the moment, we have decided to find a better time,” a Seat spokesman said, adding the division had also delayed the announcement of an innovation and digitisation agreement. He did not elaborate.