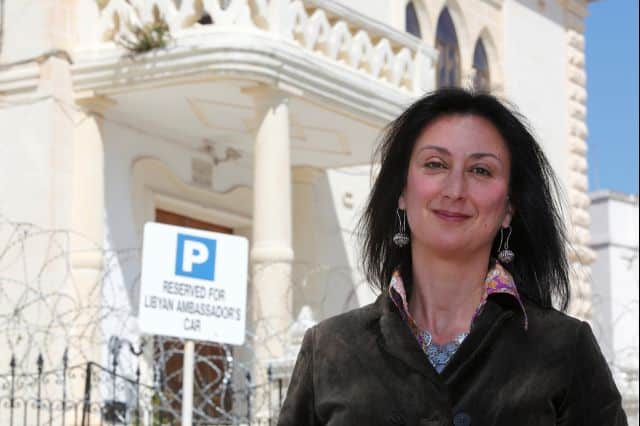 The son of Malta’s best-known investigative journalist said on Tuesday his mother was killed by a car bomb because of her work exposing political corruption.

Daphne Caruana Galizia, who wrote about graft across Malta’s political divides on her blog, died when an explosive ripped through her car minutes after she left her home in the north of the island on Monday afternoon.

Maltese authorities were waiting for the arrival of Dutch forensic experts and American FBI agents to help the investigations.

“My mother was assassinated because she stood between the rule of law and those who sought to violate it, like many strong journalists,” Matthew Caruana Galizia said on Facebook.

“She was also targeted because she was the only person doing so,” he added. He described rushing to the scene, only to find the burning car and her remains.

“Yes, this is where we are: a mafia state where you can now change your gender on your ID card (thank God for that!) but where you will be blown to pieces for exercising your basic freedoms,” he said.

The European Commission told journalists it was horrified by the murder in the bloc’s smallest state and called for justice.

Spokesman Margaritis Schinas was asked if the Commission would open an procedure to check if Malta was meeting the EU’s standards for the rule of law, a process now being applied to Poland over judicial reforms there.

He replied: “We never speculate on these questions. These are very serious subjects … This is an outrageous act that happened and what matters now is that justice will be brought.

“This is what we need to see.”

The killing near the village of Bidnija stunned the Mediterranean island. Authorities said it was the first murder of a journalist there.

“I saw a small explosion coming from the car and I panicked. A few seconds later, around three to four seconds, there was another, larger explosion,” said resident Frans Sant, who was driving in the other direction.

“The car continued coming down the hill, skidding at high speed, full of fire. The car missed me by around 10 feet. I tried to help but the fire was too much and the car ended up in the field,” he told Reuters Television.

Prime Minister Joseph Muscat and opposition leader Adrian Delia – who had both been criticised on Galizia’s blog – both condemned the killing.

“Everyone knows Caruana Galizia was a harsh critic of mine, both politically and personally, but nobody can justify this barbaric act in any way,” said Muscat, who had been suing her over some of her allegations.

Opposition leader Adrian Delia called her killing an attack on democracy and freedom of expression and demanded an independent inquiry.

“We will not accept an investigation by the Commissioner of Police, the Army commander or the duty magistrate, all of whom were criticised by Caruana Galizia,” he said on Monday.

Around 3,000 people held a silent, candle-lit vigil on Monday night in Sliema, just outside the capital Valletta.

Recently, Galizia had been following up leads from information in the so-called Panama Papers, a large collection of documents from an offshore law firm in the Central American nation that were leaked in 2015.

She was tracing alleged links between Maltese officials and offshore banks and companies used as tax havens.

Half an hour before the explosion, Galizia wrote on her blog: “There are crooks everywhere you look now. The situation is desperate.”