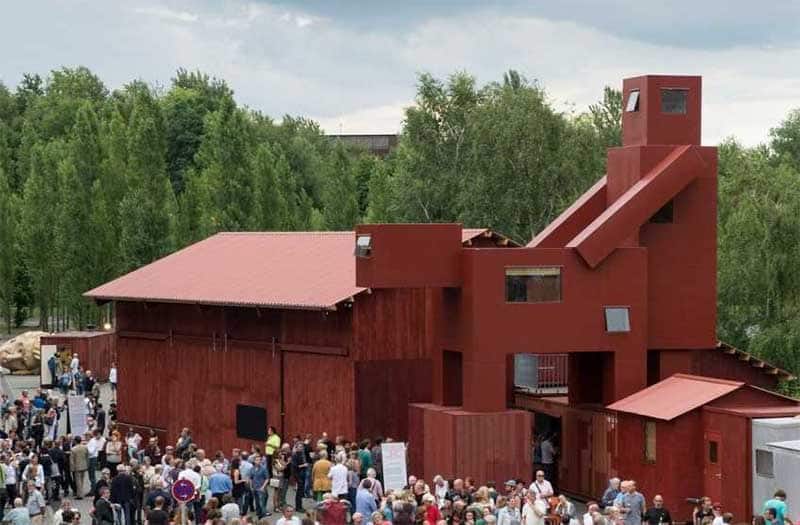 In the end it was just too kinky for the Louvre.

The world’s most visited museum shied away from displaying a sculpture that some have labelled as too sexually explicit, but the nearby Pompidou Centre on Tuesday decided the world needed to decide for itself.

But the geometric sculpture, showing a red human figure appearing to penetrate a four-legged creature, was perhaps just a little too imposing for the home of French art.

“I was surprised first of all, and then of course disappointed, because it (Louvre Museum) couldn’t show the art work,” van Lieshout told Reuters TV, adding that he had never intended to elicit a sexual interpretation.

“I couldn’t explain my ideas to (the) larger public,” he said of the Louvre’s decision to pull out.

Local media said the Louvre had made its decision after a barrage of negativity on social media and fears that it would not be received in such a public place.

The piece, made of steel, wood and fibreglass, is now on show in the esplanade outside the high-tech architectural building of the Pompidou Centre.

“This work of art is funny, it is an obvious nod to the relationship of abstraction and figurative painting that co-exist in Dutch art in the 20th century. Spiritual yes, obscene no.”

Already displayed for three years in Bochum, Germany, the sculpture had not courted any controversy until now.

Van Lieshout insisted that his work defined the domestication of animals by humans for agriculture and industry as well as highlighting the ethical issues surrounding that.

It’s not the first time the International Contemporary Art Fair (FIAC) has been at the centre of an artistic sex scandal in Paris. In 2014, vandals attacked a giant green inflatable sculpture in one of the capital’s most famous squares after its resemblance to a sex toy sparked an outcry.

At the time Paris Mayor Anne Hidalgo said the incident was an unacceptable attack on artistic freedom.

“I can understand that it can shock some people, because it’s true, it’s bound to be linked to bestiality, this kind of thing,” Marketing student Colombe Gaucherand said after looking over Domestikator.

“But it’s artistic freedom and I think we shouldn’t censor a work of art even if it doesn’t appeal to everyone.”