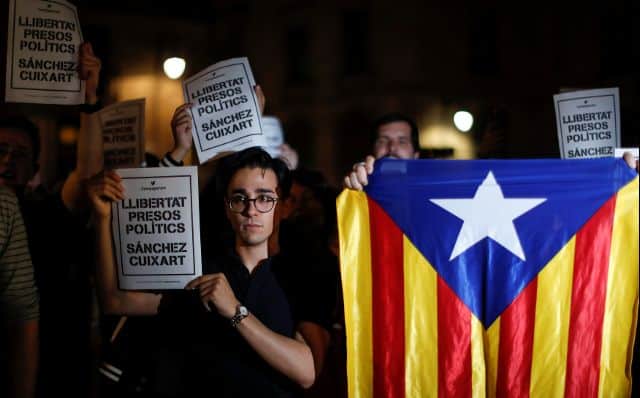 Spain moved closer on Monday to imposing central rule over Catalonia to thwart its independence push as Madrid’s High Court signalled a hardening line by jailing the leaders of two of the largest separatist organizations.

In the first imprisonment of senior secessionist figures since Catalonia’s Oct. 1 independence referendum, the court ordered the heads of the Catalan National Assembly (ANC) and Omnium held without bail pending an investigation for alleged sedition.

Around 200 people flocked to the Catalan government’s headquarters in Barcelona in a peaceful show of support for both men, with some chanting “Freedom” and waving “Democracy” banners.

The ANC, which has organised protests of hundreds of thousands of secessionists in the past, called for further peaceful demonstrations around Catalonia on Tuesday.

The High Court also banned the Catalan police chief, Josep Lluis Trapero, from leaving Spain and seized his passport while he is being investigated over the same incident, though it did not order his arrest.

Last Tuesday, Puigdemont stepped back from asking the Catalan parliament to vote on independence, instead making a symbolic declaration and calling for negotiations on the region’s future.

In a confrontation viewed with mounting alarm in European capitals and financial markets, Puigdemont failed on Monday to respond to Madrid’s ultimatum to clarify whether he had declared unilateral independence in a speech last week.

He now has until Thursday to back down.

In a letter to Spanish Prime Minister Mariano Rajoy, Puigdemont gave no direct answer on the independence issue, instead making a “sincere and honest” offer for dialogue over the next two months.

In reply, Rajoy said Puigdemont’s stance had brought Madrid closer to triggering Article 155 of the constitution, under which it can impose direct rule on any of the country’s 17 autonomous communities if they break the law.

The Catalan government’s campaign to break away from Spain has pitched the country into its worst political crisis since an abortive coup attempt in 1981.

On Monday the economy ministry told the EU that it had slashed its economic growth forecasts for next year partly due to the situation.

The Catalan government says 90 percent of voters in the referendum backed a breakaway, but turnout was only 43 percent as most opponents of independence in the region boycotted the vote, already declared illegal by Spain’s Constitutional Court.

Thousands have demonstrated in Barcelona and other Spanish cities both for and against independence. So far the crisis has been largely violence-free, except for the day of the referendum when national police assaulted voters with batons and rubber bullets.

The High Court ruled that Trapero, the Catalan police chief, would have his passport withdrawn but rejected a request from the state prosecutor for him to be held in custody.

Trapero is a hero to the secessionists after his force took a much softer stance than national police in enforcing the ban on the referendum. Prosecutors say he failed to give orders to rescue national police trapped inside the Barcelona building.

TALK TO ME, PUIGDEMONT SAYS

Puigdemont last Tuesday delayed by several weeks a formal declaration of independence from Spain to allow for talks.

Madrid has ruled out talks unless Puigdemont gives up the independence demand. It had given him until 10 a.m. (0800 GMT) on Monday to clarify his position with a “Yes” or “No”, and until Thursday to change his mind if he insisted on a split.

Following his failure to do so, a regional broadcaster said he also planned to ignore a final deadline on Thursday.

Suggesting that Puigdemont and his team were in no mood to follow Rajoy’s game plan, Catalan interior minister Joaquim Forn said Article 155 would not allow Madrid to remove members of the Catalan government.

The article’s terms on direct rule, which has never been applied, are vague.

It says Madrid can “adopt any measure” to force a region to meet its constitutional obligations, with the approval of Spain’s lower house. The wording suggests this could include anything from taking control of regional police and finances to installing a new governing team or calling a snap election.

Underlining the deepening crisis, some of the largest companies in prosperous Catalonia, which accounts for a fifth of the Spanish economy, have already shifted head offices elsewhere and others are likely to follow if Puigdemont declares outright independence.

Trump vendetta against Iran does US no favours