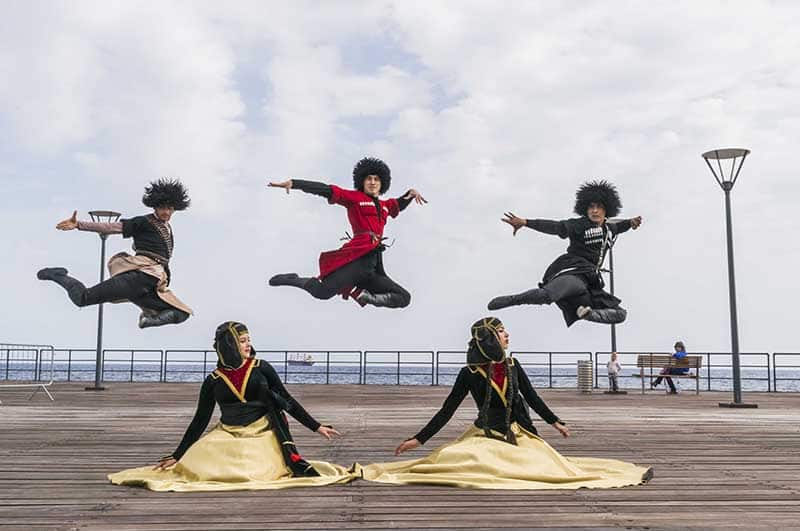 Headed by a vascular surgeon, a 200-strong dance ensemble has charmed audiences island-wide with performances of traditional folkloric dances from Greece and the Caucasus nations.

“It is mostly connected with the period of the Byzantine Empire but its roots lie in Hellenic history,” choreographer and artistic director (as well as vascular surgeon) 35-year-old Agis Toursidis said of the Romiosini National Dance Ensemble. “Since Greeks from Georgia make up ninety per cent of our ensemble and they are direct descendants of the Byzantine Greeks, it seemed logical to give this name,” he told Living, as the word Romiosini reflects the culture of Orthodox Greeks.

The ensemble’s repertoire encompasses many styles and traditions, all performed to a high standard. Toursidis explained the aim is to underline the meaning of each dance whether the performance is a war dance on a battlefield or a joyful celebration in a village. “The choreographer has space to achieve non-verbal connections between the dancers and the audience, to share his thoughts and emotions, and also energy that is being generated while he is exploring every folklore dance, music or tradition,” he said.

Toursidis first started to dance at the age of four in Stavropol, Russia, where he was born, appearing on stage at five. He said medicine is his second profession as dancing is “in his DNA”.

His father was the director of Stavropol University’s dance ensemble Kazbek, which his mother also became a member of, going on to perform solos. “My dad is a Greek from Georgia and my mom was born in Uzbekistan and dancing is in my blood. When people ask me if dancing is a hobby or a second profession, I tell them it’s my first profession since prior to medicine, I was already a dancer and choreographer.”

The family left Russia and moved to Cyprus when Toursidis was 12, and for eight years he didn’t have a chance to continue dancing at a serious level. However, when he returned to Russia to study medicine, he was invited by his father’s protégée, who had become the art director of Kazbek, to join them at their anniversary concert.

“I started dancing again; I became a soloist, then moved on to become the chief choreographer and art director of the Elefteria ensemble of the Greek diaspora in Stavropol, which my father also created.” After his medical studies he moved back to Cyprus in 2011.

Toursidis’ father Nektarios also created the Romiosini ensemble in Limassol in 1996. When Toursidis returned to the island father and son revamped and expanded the group, starting dance lessons in Paphos in 2011, followed by Nicosia in 2012.

While the best age for children to start lessons is around six, adults can also take part although it will take them a period of around two years before they are good enough to appear on stage.

“The reaction of the audience is always very exciting and people are always surprised by the performance of our children. We perform a large variety of dances of different nations. Lots of people are now regular visitors to our shows,” he said.

Ensemble students also learn about the roots and traditions of different nations as Georgian, Greek, Pontian, Cypriot, Cretan, Armenian and Caucasus dances all had very tight bonds with the Byzantines, he pointed out, adding that all of the dances performed are based on the traditional ones but have been adapted for the stage. “Every nation had its own culture and this makes us understand each other better in the modern multinational world,” Toursidis added. He believes dance can be a link between an entire nation’s culture and traditions.
It has been quite a balancing act though as Toursidis worked as a surgeon at Nicosia General Hospital in addition to being responsible for three dance schools in Cyprus while living in Limassol. He said that without the support of his wife, Anna, a soloist and choreographer in the ensemble, he wouldn’t have been able to cope.

However a move into the private medical sector means he has more time to spend with both of his ‘families’, his wife and two children, and the dance ensemble with 200 members from all over Cyprus.

But he is not set to slow down as he is currently in the process of creating a new dance show 300 Spartans that will depict the legendary battle at Thermopylae. “We will try to finish it by summer 2018,” he said.

Limassol shop owners protest over cycle lane and other improvements