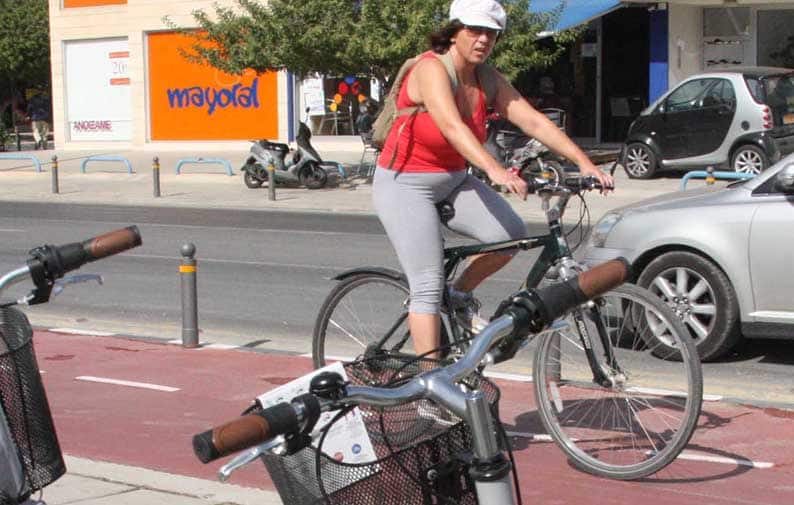 Shop owners with properties on Limassol’s Misiaouli and Kavazoglou Street on Wednesday protested against the planned road works which include a new cycle lane, saying that it meant less parking for cars which in turn would affect their profits.

The shopkeepers who are supported by small shopkeepers’ union Povek claim the reconstruction has been planned without taking them into consideration though they are directly affected and argue that they will feel the consequences, leading to closures and bankruptcy of 140 businesses.

“There were about 100 people demonstrating against the plans but the municipality will go ahead anyway,” secretary of Povek in Limassol Kyriakos Moustakas said after the protest in front of the town hall.

The works are part of a number of projects co-funded by the European regional development fund aimed at developing the western part of the city centre, an announcement by the municipality said.

The €5.2 million project is not only about a bicycle path, but 150 new trees will be planted and 10 bus stops will be added. The area will also have pavements ramps for disabled people and a bridge for pedestrians and cyclists, pedestrian crossings, new lighting, additional traffic lights and an underground utilities network.

Mayor Nicos Nicolaides, presenting the project recently, said that after eight public consultations the number of parking places has been increased from 81 to 158, while the cycling path has been shortened by 300 metres from 850 to 550 metres.

If the shop owners gave just one metre of the three they have as part of their premises, he added, more parking places could be created. In case no cycling lane was included, the municipality would lose the € 5.2 million from the European development fund.

Terra Cypria in a letter to the mayor strongly supported the municipality’s plan.

“This work will be co-funded by the European commission under its programmes for better more liveable cities and improved quality of life; it funds projects that promote walking, bicycling and mass transportation; the programme encourages sidewalks, bike-paths, green areas and promotes the ideas of liveable cities and quality of life for its citizens,” the letter said.

The conservation foundation also pointed out that if the proposed work eliminates bicycle paths, reduces sidewalks and green spaces in order to add additional parking spots directly in front of existing shops, it stands in danger of losing the EU co-funding, as it then becomes just another car-servicing road.

Costas Orountiotis from the NGO on Wednesday explained that they don’t mean to oppose the owners.

“We sympathise with the merchants’ concerns for adverse impact on their businesses but we feel it is unwarranted and misplaced. The vast majority is for the changes and they can’t see that more citizen-friendly streets will ultimately support their businesses.”

“We need to promote alternative ways of transport, cars are not for everyone, especially in the centre where we cannot expand roads and parking on the pavements is not a solution.”

Folk dance ensemble has moves in the DNA

Khamenei says Iran will ‘shred’ nuclear deal if US quits it