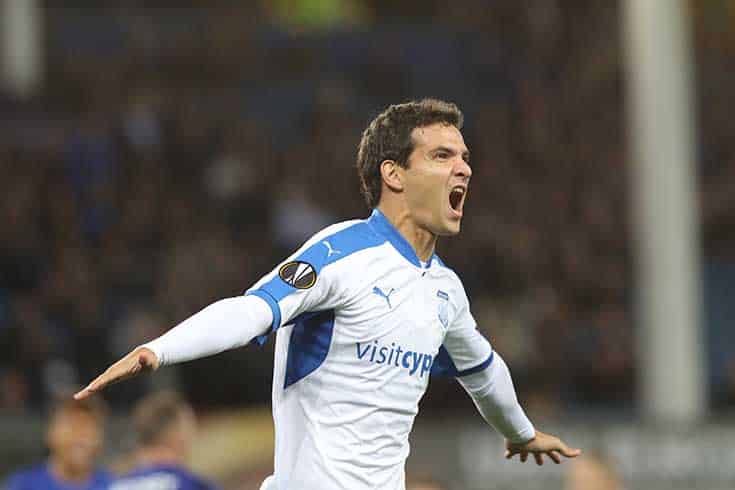 Apollon face a tough test against Italian side Atalanta on Thursday night, looking to add to their positive start to their Europa League campaign.

The Limassol side are turning heads in Europe after their two late draws against much-fancied Lyon and Everton.

Twice they looked to be heading for defeat but Adrian Sardinero’s goal in the 93rd minute against Olympique Lyonnais, and Hector Yuste’s in the 88th minute against Everton has given Apollon two points from as many games which sees them joint second in Group E.

Shortly before departing from Larnaca airport, Apollon press officer Fanourios Constantinou spoke to the press about what he expects from the testing affair on Thursday.

“The Italians are definitely favourites, but that does not mean that we are going over there for a holiday,” Constantinou insisted.

“We are going there to play a good game, we have incredible faith in our own abilities and we are not affected by any unsuccessful result in the league such as the last one against Anorthosis,” he said, referring to the 1-1 draw on Saturday.

The importance of that game at the Antonis Papadopoulos meant that manager Sofronis Avgousti was unable to rest too many of his key men ahead of Thursday’s clash. Only forward Andre Schembri and on-loan Brazilian youngster Allan were left on the bench from the usual lineup.

Apollon were hoping for a win which would have sent a real message of intent to the rest of the league, but a draw was not a terrible result especially when compared to that of their upcoming opponent.

Atalanta travelled to Sampdoria last weekend, where they slumped to a 3-1 defeat which leaves them in 12th position in the Serie A standings. Yet they do lead Group E after an impressive 3-0 win over Everton in the first game of the campaign followed by a creditable 1-1 draw away at Lyon.

At the Mapei Stadium, Atalanta have won four of their six matches this season, with just one defeat on the opening day of the Serie A campaign against AS Roma by a single goal and most recently a good 2-2 draw against champions Juventus.

Apollon have played four away matches in Europe this season, losing just one of them, and Everton have shown that they have a ‘never say die’ attitude that will ensure that Thursday’s game will not be a foregone conclusion.

Unable to assist in Apollon’s fight, however, is French defender Valentin Roberge, who saw red against Everton last time out and will serve a one-match suspension.

As ever, Apollon will be well-supported as 1,200 of their supporters will be in attendance to try to push their side towards another positive result.

The Mapei Stadium drew in just under 15,000 supporters for the win over Everton on Matchday One, and just under 20,000 for the Serie A draw with Juventus and a similar figure is expected for the visit of Apollon due to the importance of a victory for the Italians.

Apollon are the underdogs going into Thursday’s game but another fighting performance, and thus at least a point on the board, would hand a major boost to their chances of qualifying to the next round.