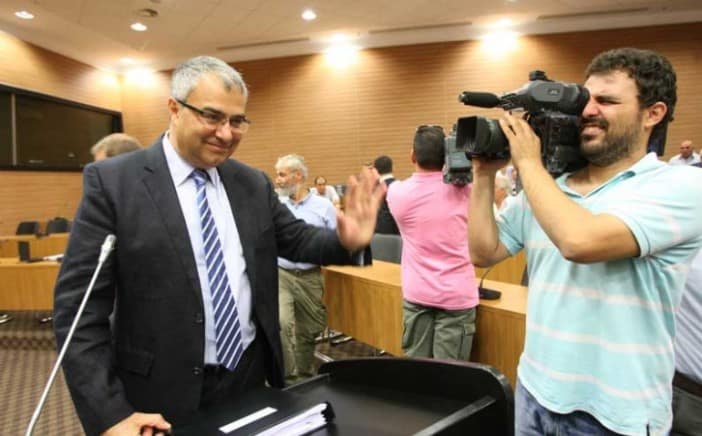 Panicos Demetriades (for those who don’t remember, he was the governor of the Central Bank of Cyprus from May 2012 until April 2014) published a book about his term which coincided with Cyprus’s largest ever banking and fiscal crisis.

He recently made a comeback but relax, not as a central banker this time but as a book author. His book is called “A Diary of the Euro Crisis in Cyprus”.

It already sparked a controversy in Cyprus mainly because of its unflattering remarks related to conversations with President Nicos Anastasiades who allegedly used colourful language, or the reference to the president’s relatives wiring funds from Cyprus Popular Bank, widely known as Laiki, days before the fateful Eurogroup meetings in March 2013.

For instance, his decision to resign after almost two years in office was because of the personal attacks he was exposed to, a rebellious board of directors, and uncooperative staff members at the central bank. Especially after everything he had done for the banking system. By the time he left office, it showed signs of stabilisation and the non-performing loans were beginning to be restructured which allowed the gradual lifting of capital controls, he says.

But Panicos tells the reader little about his dealings with Alvarez & Marsal (A&M), the company with which he signed agreements with. He tells not a single word in his book about a contract awarded to the US firm which included a provision for a 0.1 per cent recapitalisation fee, applied also to the bail-in of depositors, against the advice of the central bank’s legal advisor. He offers no explanation for the January 2014 press reports that he signed the agreement with A&M on March 28, 2013 and backdated it March 23, two days before the Eurogroup decision which sealed the fate of Laiki and meant that depositors at Bank of Cyprus would have to recapitalise it. After all, the “restructuring consultants,” Panicos tells us, had “impeccable credentials”.

By reading the former governor’s book, a naïve reader would assume that good old Panicos played an instrumental role in helping Cyprus introduce stricter anti-money laundering rules. But what he is not telling, is anything to do with his talks, which started days after his appointment, with the owners of FBME Bank, who sought to convert the licence of the FBME Bank Cyprus branch to a locally incorporated bank. He doesn’t say a word that press reports about his intention to initiate the procedure to make FBME Bank, the lender which a few months after his departure, US authorities branded as a financial institution of primary money laundering concern, caused a backlash in a number of European capitals and subsequently dramatically reduced the chances of Cyprus getting assistance for its banking sector.

Panicos also tells us little about a probable conflict of interest when he visited Cyprus months before his appointment, to speak at an event at the Strovolos co-operative bank. It was then, he says, when he met communist President Demetris Christofias who delayed negotiations with the troika in order also to secure special treatment for the cooperative banking sector. It was in 2012, he said, that he first met Christofias but he tells us nothing about the rumours that started circulating months before that meeting that he would succeed Athanasios Orphanides. The author of this article first heard about his appointment from a group of Laiki bankers as early as December 2011.

Panicos, the former central banker who boasts for being the saviour of the mismanaged and battered Cypriot banking system after doing whatever was in his power to give it the coup de grace, complains in his book that media had been hostile to him from the very beginning and that gossip columns exposed his “‘Bolshevik’ roots”.

But he doesn’t say that that the gossip was triggered by the references to his biography in an interview to the communist newspaper Haravgi. The interview published in 2011 was how he effectively declared his interest for the job. It included a reference to his “Bolshevik” grandfather, and thanks to his ideology he ultimately got the job.

Panicos’s book tells a lot but it is economical with the truth. Like a true Bolshevik, Panicos, who once proposed that Germany should ditch the euro to save the euro area, did what former Soviet leader Leonid Brezhnev advised. Brezhnev once said that “there is nothing more practical than a convenient theory”. Hence, the professor selected convenient parts of the truth to construct upon them a complex structure of lies or half-truths.

His book costs £23.99 (€27) and can be bought online. If you can afford it and have spare space on your bookshelf, it can offer you an amusing distraction from reality.