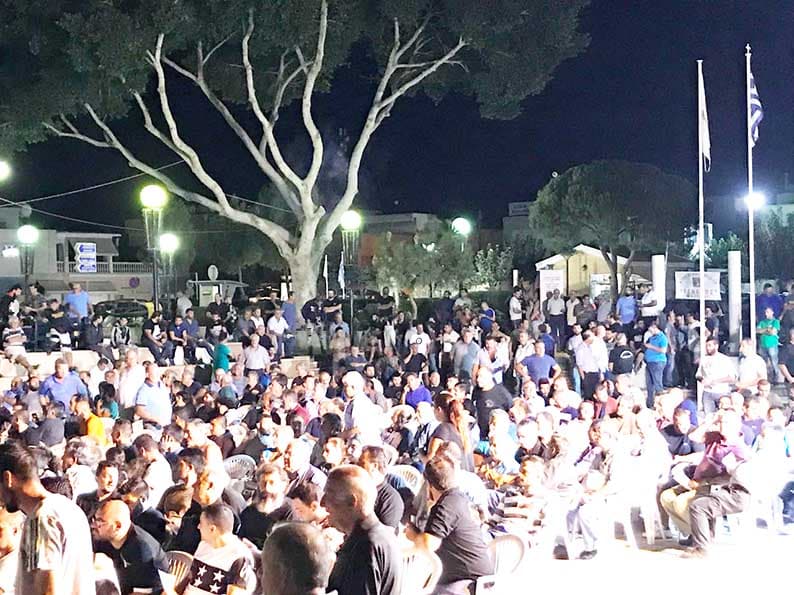 Some 3,000 people protested the ban on bird trapping

Paralimni Mayor Theodoros Pyrillis on Thursday threw his weight behind supporters of song bird trapping, warning activists against the practice that if they continue their operations in his area people will take matters in their own hands.

The outburst followed a protest in Paralimni on Wednesday where more than 3,000 people gathered to voice their opposition to a total ban on trapping song birds with lime sticks – branches covered in sap that the birds stick to – and nets.

The new law came in response to criticism from the European Commission on the Cyprus government’s willingness to address poaching, in particular of migratory songbirds in the Famagusta and Larnaca regions.The songbirds are sold on the black market to be pickled, roasted or fried and eaten as a delicacy. The dish is known as amboupoulia, and many people see it as part of Cypriot culture.

Pyrillis, said that the law should apply to all; poachers and activists using illegal means to monitor such activities.  The event was organised by hunters and a group that call themselves ‘friends of lime sticks’ (filoi tou ksovergou).

The protest, which Pyrillis attended, was over the new legislation voted in parliament last summer that forbids trapping songbirds with lime sticks and nets, which Paralimni residents locals say it’s part of their tradition and cultural heritage. The event was also to protest restrictions on the number of dogs a hunter can use, and a ban on bird callers.

Participants also collected signatures against the operations of activists of the Committee Against Bird Slaughter (Cabs) in their district, who they accuse of using illegal means to monitor bird trapping, trespassing on private property and violating human rights.

Cabs is a group of activists whose members visit Cyprus regularly, as well as other countries where bird trappers, hunters, and animal traders commit offences against European nature protection legislation.

Speaking to state broadcaster CyBC TV on Thursday Pyrillis said his presence at the protest was to show his support for all that needs to be done. He said poachers must be prosecuted but at the same time, the law must be applied only by state authorities such as the police and the game and fauna services and not activists, such as Cabs, who ‘use illegal methods to gain information and breach human rights and personal freedoms, which is unacceptable’.

“We will never allow this again. The next time that they will try to do this, if the state cannot put them in their place, citizens too will become activists and deal with these people,” Pyrillis said.

He said that the group uses drones equipped with thermal cameras so that they can have visibility at night, which they fly over private property to check if there are lime sticks and enter fenced off property. He also accused it of having high-technology observation equipment that can see people naked in their homes.

“What law allows this? What right did she have to be in the kitchen of that house?” he asked.

A representative of Cabs, who wished to remain anonymous, called the show to reassure Pyrillis that the group does not own drones or thermal cameras. He also urged anyone catching any Cabs activist doing anything illegal to go to the police. He also said that he was not aware of the video in question and that they do not enter people’s homes.

The Paralimni residents also expressed concerns over the country’s national security and the threat the activists pose.

Krasas said that no one knows who the Cabs activists truly are and their motives. He said that they have charted the entire island and are in a position to transmit these data to anyone. “Are they spies?” he asked.

At the protest was also Archimandrite Avgoustinos Karras of the Constantia Bishopric.

Karras said that catching song birds with lime sticks was a tradition going back centuries.

“This is tradition, not a crime. If that was the case, then the first ever criminal would be God who was sending them (songbirds) to the Israelites in the desert, to survive,” Karras said.

Washington ‘trying to squeeze Russian gas out of Europe’: Putin