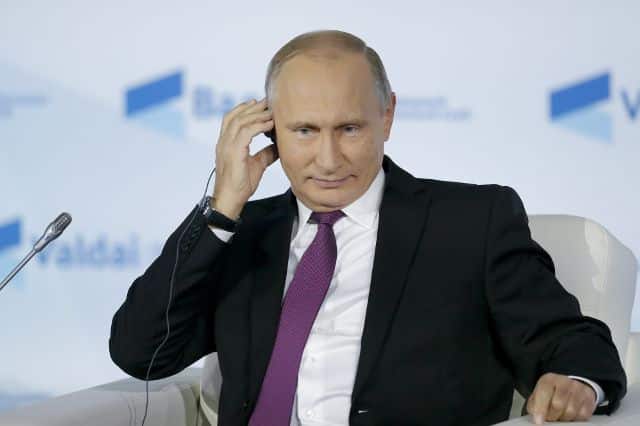 President Vladimir Putin accused the United States on Thursday of trying to squeeze Russia out of European energy markets, saying the latest round of US sanctions was designed to force Europe to buy US liquefied natural gas instead.

Speaking at a policy forum in southern Russia, Putin launched a withering critique of US foreign policy stretching back to the 1990s, accusing Washington of repeatedly betraying Moscow’s national interests and of flouting nuclear and chemical weapons treaties it had signed up to.

He avoided direct criticism of US President Donald Trump however, while saving his harshest criticism for a new package of US sanctions that Trump grudgingly signed into law in August after Congress approved them.

“The recent sanctions package adopted by the US Congress was openly designed to push Russia out of European energy markets and to force Europe to switch to more expensive liquefied natural gas from the United States, even though the volumes there are not yet sufficient,” said Putin.

The Kremlin said at the time that it was worried that the sanctions could hurt major investment projects with European partners such as Nord Stream 2, a project to build a pipeline carrying Russian gas across the Baltic.

Much of the rest of Putin’s speech was devoted to describing how he believed the United States had betrayed Russia in the 1990s by not reciprocating to what he called the unprecedented access Moscow gave it to Russia’s secret nuclear facilities.

Putin revived accusations that the United States had tried to stir up separatism in southern Russia and complained about the 2003 US-led invasion of Iraq and Nato’s 1999 bombing of Yugoslavia.

The Russian leader also lashed out at Europe and the West over Spain’s Catalonia, saying that “some foreign colleagues” were guilty of double standards.

They had decided it was fine for Kosovo to declare its independence from Serbia in 2008, said Putin, but that the situation in Catalonia, Iraq’s Kurdistan, and in Crimea, which Russian annexed from Ukraine in 2014, should be treated differently.

“Why did it (Europe) have to unthinkingly, out of political competition and a desire to please the big brother in Washington, unreservedly support the breakaway of Kosovo provoking similar processes in other regions of Europe and the world?” Putin asked.

At a question-and-answer session after his speech, Putin accused the United States of upsetting the strategic nuclear balance by modernising its arsenal of weapons.

He said that Russia would develop new weapons systems, if it was forced to in response to US moves. He also said that if the United States pulls out of the intermediate-range nuclear forces treaty, Russia’s response would be instant and symmetrical.

Paralimni Mayor stands up for tradition of bird trapping