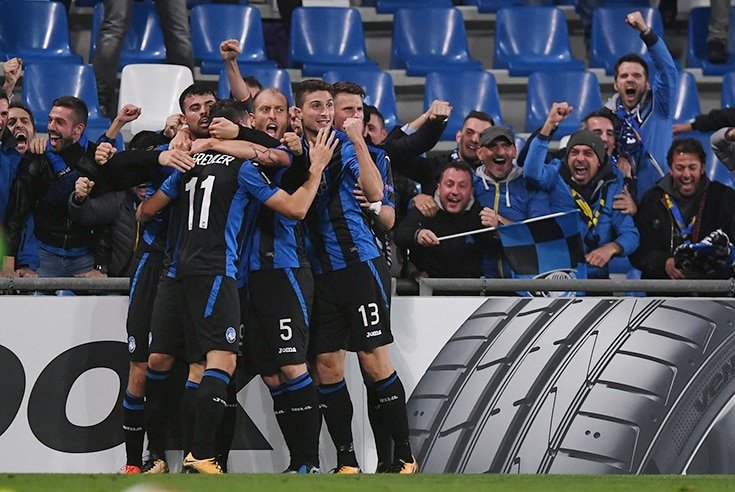 Apollon fell to their first defeat of their Europa League group campaign on Thursday, losing 3-1 against Atalanta in a one-sided affair at the Mapei Stadium.

The Cypriot side were underdogs going into the game against the group leaders who were on four points from their first two games.

Yet two draws for the Limassol club against Olympique Lyonnais and away at Everton respectively meant spirits were high in the visiting camp.

The magnitude of the challenge they were about to face, however, became apparent from very early on.

Danger man Alejandro Gomez forced goalkeeper Bruno Vale into action after just four minutes, as he cut inside and looked to curl the ball into the far corner, but it was well-saved by the veteran stopper.

Remo Freuler was then played through on goal, who tried to round the goalkeeper but Bruno Vale did well to second guess the midfielder and gather the ball.

Minutes later, some carless play in the middle of the park from the visitors almost let Atalanta in for a second goal, as Andrea Petagna this time found himself bearing down on goal. The striker cut inside but his goal-bound effort was blocked by the body of Esteban Sachetti.

Despite a stern team-talk from Sofronis Avgousti at half-time, it looked to have changed very little as Apollon were on the back foot from the first minute of the second period.

Some clumsy defending allowed Ilicic to feed Gomez in on goal and while the captain managed to guide his shot on target, Vale again came to Apollon’s rescue to keep them in the game.

The chances continued to rain in on Vale’s goal, this time Petagna rolling Andrei Pitian to strike a powerful left-footed attempt on target that was saved by the Apollon captain. The resulting corner saw Petagna climb highest but his header went just wide of the goal.

Yet, much to the shock of the Mapei Stadium after witnessing an incredibly one-sided 60 minutes of football, it was Apollon who found the net next.

Antonio Jakolis crossed the ball in from the right-hand side and on hand to head home was Andre Schembri. At full stretch, the Maltese forward wrong-footed the keeper to hand the visitors a leveller out of nothing.

The goal seemed to spark the home side into action, however, as they quickly regained the lead. Five minutes after Schembri’s goal, Petagna would this time find the net with a header from a corner, beating Vale to the punch.

And minutes later, the game was put beyond any reasonable doubt. Gomez found Ilicic on the edge of the box who chested the ball into the path of Freuler, and this time the Swiss made no mistake, guiding the ball into the far corner for 3-1.

Apollon will be disappointed that about how they switched off after managing to draw level but Atalanta were more than worthy of the win with a dominant performance.

In the group’s other game, Lyon defeated Everton 2-1 at Goodison Park, a result which means Apollon remain in third place on two points, one point above the English side. Lyon occupy second place with five points while Atalanta remain top with seven.

Apollon’s next game sees them host Atalanta at the GSP Stadium on 2 November.

Our View: A handful of shopkeepers should not be allowed to dictate urban planning