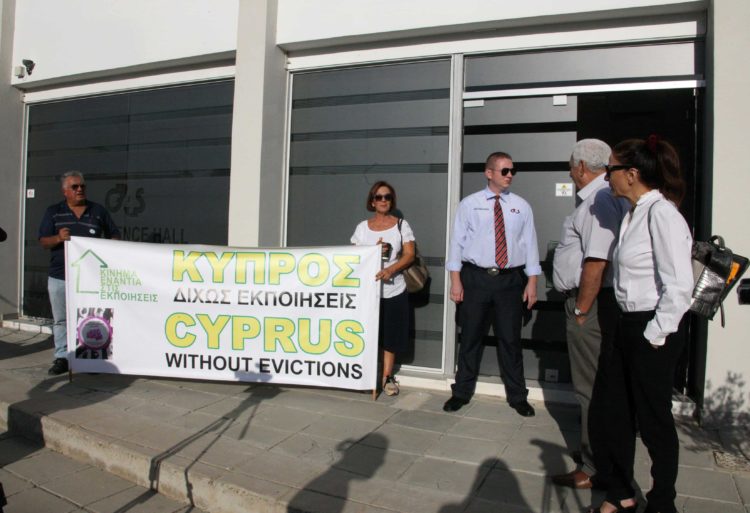 Hellenic Bank was unsuccessful on Friday in selling a foreclosed house in Latsia, a Nicosia suburb, as the auction once more attracted protesters and not a single bid.

Members of the movement against foreclosures and the single parents’ association gathered at the auction venue to protest the bank’s intention to foreclose the residence of a single mother and her underage child, the Cyprus News Agency (CNA) reported.

The house, with a covered area totalling 460 square meters, is the collateral of a €600,000 loan extended to the family in 2010, a source familiar with the matter said in a telephone interview.

“They only paid a single monthly instalment and we never heard from them afterwards.” The reserve sale price at the auction stood at €400,000, the source said.

It is Hellenic Bank’s second unsuccessful attempt to foreclose a primary home in less than 90 days. On September 7, when Hellenic Bank attempted to auction a 263 square-meter house in Engomi, the members of the movement and representatives of political parties, including supporters of the far-right Elam, gathered in and outside the venue.

“Three days before the auction, they (the borrowers) contacted the bank offering to swap the house in exchange to the full amount of the loan,” the source said.

This version is confirmed by comments attributed to the chairwoman of the single parents’ association, Limassol-based lawyer Argentoula Ioannou.

“In this particular case, a bank ruling was issued concerning the family’s debt, but the young woman proposed to the bank to take the house at its estimated value of €600,000 and requested two or three months’ time to vacate the house,” Ioannou was quoted as saying by CNA. “Without hesitation and social sensitiveness, the bank proceeds with the auction at a minimum reserve price of €400,000; they don’t care that this family would lose their home and that with €400,000 the debt will not be settled.”

She also criticised Cypriot banks for foreclosing primary residences after they assured that they would only concentrate on commercial properties and added that the protest demonstrated “our decisiveness to defend the people’s right to a home, blatantly violated with this auction procedure.”

Ioannou said that borrowers should be aware of the meaning of the type “I” and type “IA” notification letters banks send. “They are new procedures, which have adopted the express auction procedure,” she continued. “The auction can take place in two months’ time and the people may find themselves on the street”.

The spokeswoman of the coordinating committee of the movement, Evgenia Moyseos, asked the public to join their cause to help fellow citizens at risk of becoming homeless, CNA said.

As the primary home receives no protection, and in the absence of a housing government policy, citizens have to fight for themselves, she said.

Cypriot banks, struggling with a non-performing loans ratio of 45 per cent are increasingly becoming impatient with uncooperative borrowers or strategic defaulters. Last year, Moody’s investors service estimated that in up to 20 per cent of cases of non-performing loans, borrowers are able to pay but they opt not to.

In January, Hellenic Bank, which has a delinquent loan ratio of 57 per cent as per June, entered an agreement with APS Holdings, a Czech non-performing loans specialist in an attempt to speed up debt collection.

Rashford must look to reach next level, says Giggs