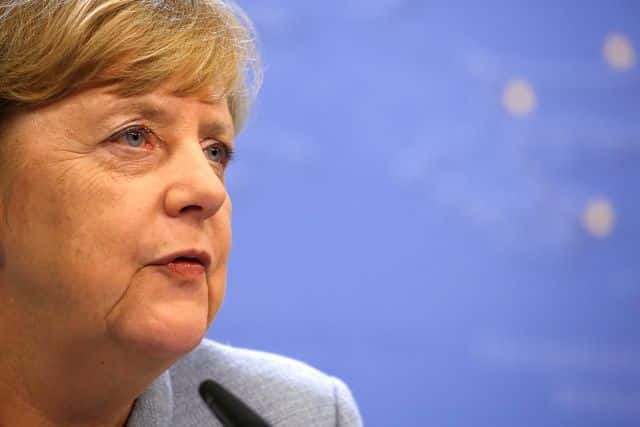 European leaders agreed on Thursday to explore cuts in EU funds to Turkey that are linked to Ankara’s stalled bid to join the bloc after German Chancellor Angela Merkel pressed for action in response to what she described as “unacceptable” Turkish behaviour on human rights.

While praising Turkey for taking in Syrian refugees, Merkel stuck with the tougher tone she adopted during her reelection campaign last month, although she stopped short of calling for an outright end to Ankara’s decade-long push to join the bloc.

“We asked the Commission to make recommendations on changing and reducing the pre-accession aid,” Merkel told reporters after the first day of an EU summit.

“There is no majority for breaking off the talks immediately. On the other hand there is a great deal of scepticism about the current situation. I made the case tonight that we should seek dialogue with Turkey.”

Earlier she said that the rule of law in Turkey was “moving in the wrong direction”, in a reference to the large-scale purge that President Tayyip Erdogan has carried out following a failed coup attempt in July 2016.

Other countries, including the Netherlands and Belgium, backed a diversion of the funds that EU candidate countries receive while they are in talks to join the bloc.

Launched in 2005 after decades of seeking the formal start of an EU membership bid, Ankara’s membership negotiations were always sensitive for France and Germany because of Turkey’s status as a large, mainly Muslim country.

But the scope of Erdogan’s response to last year’s coup attempt, his detention of U.S. and European citizens including dual nationals, and his jibes at Germany and the Netherlands for what he has called “Nazi-like” behaviour.

Aside from money that the EU gives Turkey as part of its 2016 migration deal, Ankara is set to receive 4.4 billion euros from the EU between 2014 and 2020.

Some northern countries say aid meant to help Turkey reform politically now makes no sense because Ankara has cracked down so dramatically after the failed coup.

Turkey is set to receive almost 500 million euros next year for the EU’s common budget and European governments are discussing how much to limit that while not hitting projects such as infrastructure and agriculture.

The European Parliament has proposed reducing the transfer by 50 million euros next year, with another 30 million euros set aside for further cuts should the relationship with Turkey deteriorate even more. A vote is expected on Wednesday.

“Providing Turkey money for political reforms does not make sense given the situation,” said Siegfried Muresan, a centre-right EU lawmaker who is leading EU budget in the parliament.

However, EU governments are divided, with Poland, Britain and Sweden maintaining their strong support for Turkey’s EU membership and countries such as Austria demanding not just a freeze to accession funds but an end to membership talks.