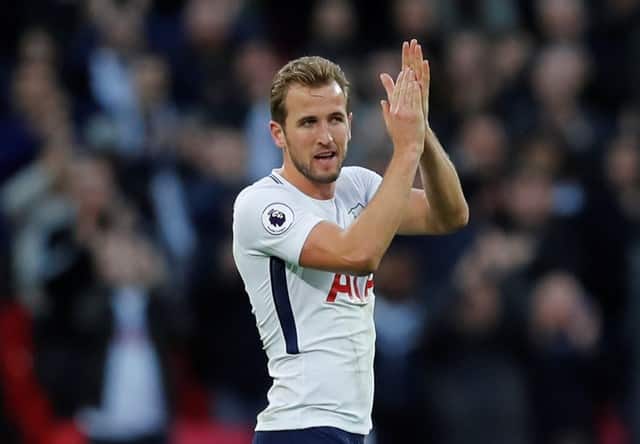 In front of 80,000 fans, the biggest ever Premier League attendance, Kane took his league tally to eight for the season with his side’s first and fourth goals.

Son Heung-min and Dele Alli were also on target for an impressive Spurs side, who led 3-1 at the break after a breathless first half, while Mohamed Salah’s reply had briefly given Juergen Klopp’s side hope.

Tottenham’s fourth consecutive victory, and first in the Premier League against Liverpool for five years, put them level on 20 points with second-placed Manchester United and five behind rampant leaders Manchester City.


Everton dropped into the bottom three of the Premier League after Arsenal came from a goal down to earn an emphatic 5-2 victory at Goodison Park on Sunday, their first away win of the season.

There was an air of quiet, depressed resignation throughout much of the game from the Everton fans but the now familiar boos rang out at the end and the future of Dutch coach Ronald Koeman looks precarious.

“I told the players I believe in them, in their commitment. The decision is not in my hands,” Koeman said after the game.

“We are not in a position on the table that is good for Everton, I understand, I have been in football a long time, don’t tell me what can happen, I don’t think it’s too late.

“I am responsible for this team, it’s a big result even against a team like Arsenal, we will see what happens,” he added.

It all started so well for the hosts as Wayne Rooney curled a stunning 12th-minute opener into the net to give his side the lead — the strike coming almost 15 years to the day since a 16-year-old Rooney announced himself to the world with a remarkably similar goal against the same opposition.

Despite trailing, Arsenal dominated from then on, mustering 17 shots on goal in the first half alone, one of which was Nacho Monreal’s equaliser from close range five minutes before the break.

The Spanish fullback drilled the ball home after a Granit Xhaka shot had been parried out by Everton keeper Jordan Pickford.

Arsenal continued on the front foot after the interval and took the lead in the 53rd minute via the head of Mesut Ozil — the German flicking in a perfectly weighted cross from the excellent Alexis Sanchez.

Everton midfielder Idrissa Gueye was dismissed 15 minutes later after collecting a second yellow card, before a goal from Alexandre Lacazette in the 74th minute and late strikes from Aaron Ramsey and Sanchez, the latter a fine individual effort, either side of an Oumar Niasse consolation.

Arsenal move up to fifth with the win and they will be hugely encouraged by the impressive return to fitness and form of Ozil and the way he combined with Sanchez and Lacazette.

Manager Arsene Wenger said the performance had been “maybe the most complete defensively and offensively” of the season and was particularly pleased with the way his team responded to Rooney’s opener.

“It was about how we responded to that — could we keep calm? We did that in a convincing way. Our passing and movement was excellent,” said the Frenchman.

“It’s very difficult to single out any performances as everyone played very well. It was important to get our first win away from home.”

Hamilton wins U.S. GP but made to wait for title