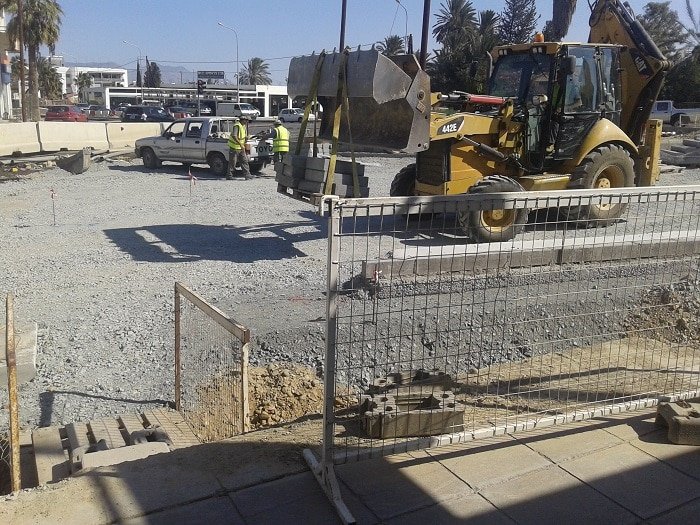 Although they are never popular whilst they are taking place, few roadworks have been as controversial as the ones in Aglandjia in Nicosia.

The massive extension works on Aglandjia and Larnaca avenues have angered business owners, the public and environmentalists.

The most recent protest was just last week over the dozens of trees being cut down in Akadimias park.

Although the project began in January 2016, protests began even a year before when the plan for Aglandjia and Larnaca avenues materialised. Since then the works have been further marred by several delays.

The scheme entails changing the current set up from two lanes – one in each direction – to a four-lane road. Two of those lanes will be used for buses. The idea is to cater for the approximately 20,000 vehicles that use the two avenues on a typical day, according to the public works department.

“The level of traffic volumes on main junctions increases to 1400-1800 vehicles per hour, a number which shows the extremely high degree of saturation,” a statement from the department said.

Additionally, four roundabouts will be created in a bid to reduce speed and a central islet to prevent illegal U-turns.

Aglandjia mayor Charalambos Petrides, who took over months after the project had begun, told the Sunday Mail that the works would vastly improve the image of the area and upgrade infrastructure such as underground cables, sewerage systems and flood prevention.

“Overall, it’s good. On a local level, however, it’s created a lot of problems and delays have made it worse,” he said.

Petrides was referring to shop owners who have seen their sales plummet by over 50 per cent, as road works make businesses very hard to access due to difficulty parking and walking through the rubble.

“Shop owners are fighting to survive. Many have closed.”

Additionally, part of the road expansion required taking up much of the space outside shops and homes in many cases. According to the town planning department, the cost of expropriation has been approximated at €4m while the project itself costs €11.9m plus VAT.

The final deadline for the roadworks is set to be July 2018.

In the long run, Petrides believes the overall aesthetic improvement will bring in more investment to the area. It houses the University of Cyprus, the Higher Hotel Institute and the Cyprus Institute of Management and so may attract bigger shops and student accommodation.

Part of the project surrounding the area near the University of Cyprus has involved cutting down trees from Akadimia park which led to last week’s demonstrations by high school students.

According to Petrides, a compromise has been reached with authorities and instead of the roadworks taking up to 12 metres of the forest area, the space has been reduced to around four metres.

Savvas Theodoulou, a spokesman for the Struggle for Aglandjia Committee which was set up as a voice against the roadworks, told the Sunday Mail that the image the state is trying to project is a farce.

“We wanted a road that would be centred on the needs of people, not of cars,” he said.

“This is bringing the highway into the city.”

The departments of public works and town planning insist the project will increases road safety, not only for drivers but for pedestrians as there will be 41 pedestrian crossings, street lighting, cycling lanes and access for the disabled.

On Larnaca Avenue at present, however, access is difficult even for people without disability, and shopkeepers are fuming as the roadworks outside their business which should have been completed by April are still ongoing.

The latest deadline is the end of this month or beginning of November even though bumpy self-made pedestrian paths are still the only access to many shops.

“Look outside. How is a grandmother going to walk through this? And if someone was coming with a car, where would they stop? They’ll go elsewhere,” Lilly Tsokovska said, looking through her bookkeeping notes.

She is running Paloma, a store selling hygiene products and has seen her work slashed from around €600 to €12 or €20 per day.

The situation gets no better further down. Nicos Pitsiakkos, who runs a butcher shop, said in the past six months, he has seen his sales tumble.

Pitsiakkos is not only irritated that the road works outside his business should have ended months ago and have thus adversely affected his income, he doesn’t believe the road expansion will actually help.

His main issue is that there won’t be anywhere for cars to park. Although the plan provides for over 280 parking spots according to the public works department, business owners say the spots will be too narrow and the mayor agrees.

“The space should’ve been two and a half metres long but they shortened it and it’s about 1.80m. It’s not impossible but it’s a bit tight,” Petrides said.

Kyriacos Georgiou, who helps his family run a convenience store on Larnaca Avenue, said the works outside his store have been going on for the past 10 months.

They have managed to stay up and running solely because it’s family run, he said, and everyone can put in the extra hours, but it hasn’t been easy. Already, two employees have been fired and the workload has dropped by 70 per cent, he added.

Their main clients now are pedestrians but the difficult parking has meant “most of the customers already left. Only a miracle will bring them back.”

“We sacrifice to survive.”

Georgiou has also not been persuaded that the changes to the roads will be an improvement.

“The final result won’t be good at all. It’s parking for bicycles they have, not cars.”

He also feels that it was safer for people to cross when it was a two-lane street as opposed to the planned four lanes.

The ongoing roadworks are themselves a safety risk, residents say.

Friends of a young man who died a few weeks ago after crashing his motorbike into one of the cement blocks used in the construction of a roundabout say the constantly changing road directions across the avenue near the university may even have been a contributing factor to the accident.

“Considering the road was dark and regularly changing, I don’t think proper safety precautions were taken, like proper warning signs, or some temporary lighting or speed bumps, adequate reflectors or something. A very dangerous situation.”