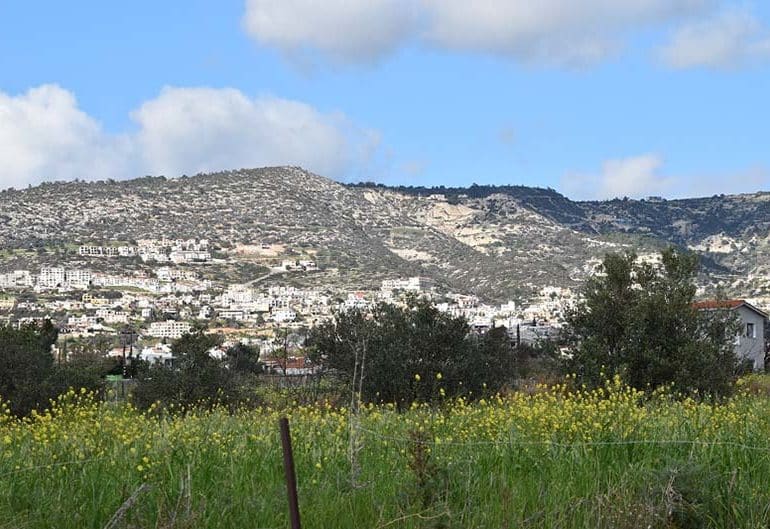 Ayia Vouni with Peyia village below

PEYIA municipality is challenging the government’s decision to issue a planning permit for a massive development on a hillside overlooking Peyia and is taking the town planning department in Nicosia to court.

This is the first time that the local authority has taken such a step.

In the last 18 months, Peyia council has raised documented concerns over the development including height of buildings, possible landslides and flooding, water supply and public access roads.

“We have a large majority decision of the council to make this move. We repeatedly made our position known and have held various discussions for a year and a half, all of which are well documented, and we have serious concerns which were not taken into consideration,” Peyia councillor, Linda Leblanc told the Sunday Mail.

Last week, the mayor of Peyia, Marinos Lambrou signed the necessary documents for the municipality’s lawyers to take the town planning department to court.

Planning permission for the project was granted on July 28, and Peyia authorities were officially informed of the move on August 11. A 75 day deadline to object to the permit started from that date, said Leblanc.

The project’s developer is former president George Vassiliou and the design, described as a ‘sustainable development project and a near zero energy settlement’, is receiving EU funding from Zero-Plus Project, Directive 2011/92/EU. This is part of the Horizon 2020 Research and Innovation Programme which focuses on achieving near zero and positive energy settlements in Europe.

“How can a hillside be bulldozed for one zero energy house? This is about selling houses and it’s ‘greenwashing’,” she said.

The development is one of the few proposed since changes were introduced to building policy in 2014, concerning the promotion, regulation and control of a new type of development in the countryside which aims to provide increased building efficiency.

The developers describe the project at Ayia Vouni (Sacred Mountain) as green and sustainable. If it goes ahead, it will be built next to the protected Pikni forest. A small part, about five per cent, will also fall within the EU-protected Natura 2000 network. The development will total around 25.5 hectares.

“The development is a considerable size in what remains a natural area,” she said.

The development will include a large residential complex consisting of 145 flats and 129 villas, a health and environmental research and development centre, a rehabilitation centre. It will also include a ‘village centre’ with commercial facilities (such as offices, shops, banks), restaurants and cafes, a sports centre, spa resort and an art gallery.

The proposed project is in an area of outstanding beauty, said Klitos Papastylianou of the ‘initiative for the natural coastline and commons of Cyprus’, adding that they believe that flora and fauna will be endangered as well as six types of habitats, including two primary habitats, although these are out of the Natura 2000 zone.

He said many concerns have been raised over the proposed development by environmentalists and that Peyia held meetings with the authorities, environmental NGOs and residents.

“Broadly, our views are that this is an unsustainable project with significant and irreversible impact on the environment of the area.”

The area proposed for the project falls outside Peyia’s designated building zone, is on a steep slope and will include four storey high apartment blocks.

“The landscape will be totally transformed and the impact will be irreversible. Two areas of soil in the geological and geotechnical studies showed significant risk and the landscape has significant cultural value.”

He added that the development would be in two zones, Z1 and Z3. The former is a protected area of nature and forest and although only five per cent of the project would be situated there and not involve any building, it would severely impact the area.

“Ninety five per cent is in Z3, which comes under the protection of the natural environment, this is an area of outstanding natural beauty. It’s problematic on all aspects of the assessment,” he said.

Peyia councillor Andreas Christodouolou, 29, recently elected for the first time as an independent, on the “Peyia Young Initiative” ticket agrees.

“We (Young Initiative), support new developments in the area, but only those which respect the culture, natural environment, flora and fauna and are developed in harmony with the environment. There are several aspects why this proposed development is a huge worry for the village,” he said.

Christodoulou said that these include: a huge negative impact on the environment, including the protected Pikni forest. It would also adversely affect the soil and the water table and there would be problems with the drainage system.

“The planning authority approved the construction of two lakes on the ‘public’ area within the plans and these are at the bottom of the plot, on a slope and the municipality would have to maintain these,” he said.

He added that the construction of the development’s biological treatment plant would sit ‘above’ all of the homes in Peyia, and create a stench for the entire village.

The cost is another aspect, he said, as a water supply would need to be brought into Peyia to satisfy the demand of the new project and there is already a water shortage in Peyia.

“A new water channel would cost around 1.5 million euros to bring water from Kannaviou dam, including the purchase of land in Kathikas to build a large water tank there and the planning authority has not made it clear who has to pay the costs,” he said.

He said that health and safety of the villages, its residents and visitors is paramount and the development would be a gated community with private roads and the people of Peyia would have no access.

“What would happen if there was a fire in the forest, we would need access,” he said.

In addition, the permit was granted for 15 years, when it is usually valid for a three year period and ‘no-one has answered’ how long the construction would take.

“The dust and noise would have a huge impact on the village and the local economy and would create problems for the tourists,” he said.

“This is a fragile protected zone and not suitable for four storey apartment blocks. The action is also discriminatory against locals who are not permitted to develop outside the building areas,” said Leblanc.

Representatives for the Ayia Vouni project said they did not want to comment on any court proceedings being brought by the Peyia council.

President has led us to partition, says ex-minister