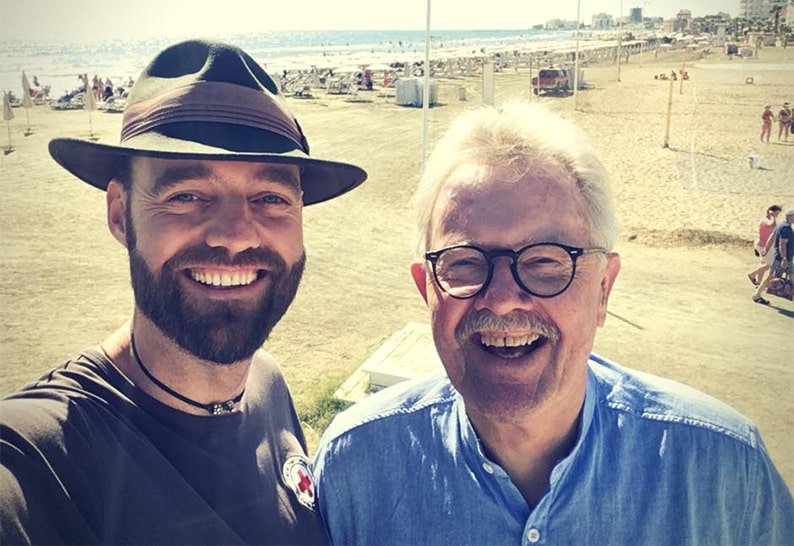 Thor with his father on Phinikoudes beach

Torbjørn Pedersen or Thor aims to be the first person to travel the world without flying, while spending at least one day in each country.

This week the 38-year-old is in Cyprus, having arrived on a cargo vessel from Greece because there are no passenger ferries.

He left his native Denmark in 2013 and hasn’t been back since, nor does he expect to return for nearly two more years. His estimated return date is July 5, 2019.

“Up to now I have travelled half way to the moon or more than 4.5 times around the planet,” Thor said after arriving in Cyprus.

The journey has three purposes, setting a new record by travelling to 203 countries without using an aircraft, promoting the Red Cross and publicising positive experiences in each of the countries he travels to. Many countries are portrayed negatively in the media, hence Thor’s need to spend some time in each of them.

It also makes his record attempt slightly different, he says. Others who have attempted something similar barely put their foot on the soil of a country before they went on to the next.

So far the seasoned traveller has been to 142 countries.

“By sheer coincidence Cyprus became a lot more than country no 142. As planned it also became the last country within Europe but it just happened to be on the four year day of when I left Denmark!” he posted on his blog.

“So in reality it has taken exactly four years to complete a visit to every nation on the first four continents: Europe, North America, South America and Africa. Four years – four continents! Now that in itself is nothing remarkable but when you add to the equation that I haven’t flown a single time, that I have spent more than 24 hours in each nation (including the Vatican), that I haven’t returned home since we began, that I haven’t paid out any bribes, that the project budget is $20/day…well I guess it’s a pretty good story.”

He arrived in Cyprus on a ferry carrying trucks from Athens on October 12.

Networking helps him to plan his moves and it certainly helped him reach Cyprus. It is through a mutual friend on social media that Thor came into contact with the man who helped him find a ferry to Cyprus – for free.

“It isn’t every day I meet such an individual as Thor. It’s hard not to feel inspired or entertained by him when he tells you his story. Having founded a number of companies, his mantra of never giving up on your goals resonated with me. I’m pleased that we were able to help him and I’m proud to be able to call Thor a friend.” Sergey Galin, founder of BeFlexi.

Galin arranged with Salamis Shipping for Thor to travel on their cargo vessel Alexo.

The vessel has cabins but they are usually reserved for truck drivers. An exception on this 2 1/2-day long trip was made for Thor.

Upon his arrival he spent the first three days in Nicosia, where he had booked a free guest room in someone’s house via internet platform couchsurfing.

After that he travelled to Larnaca, where he was joined by his father who had flown out from Denmark and booked a hotel room for himself and his son.

For the last part of his Cyprus stay, another free room is waiting for him in a Limassol home.

For now, he is enjoying his father’s company and is exploring Cyprus.

When he is not out exploring Cyprus’ history “of which there is no end” he is also looking into finding his next transport. There is no regular ferry to Lebanon, and he will need his networking connections again to find a transport, most likely another container ship.

He now has 61 countries left to go.

If you want to help Thor by raising funds please go to https://www.indiegogo.com/projects/once-upon-a-saga-never-give-up-people#/  He stressed people don’t have to donate hundreds of Euros. “Every 1,2 or 5 Euros is a big, big, help,” he said. “If you can spare a few coins then please throw them my way.”