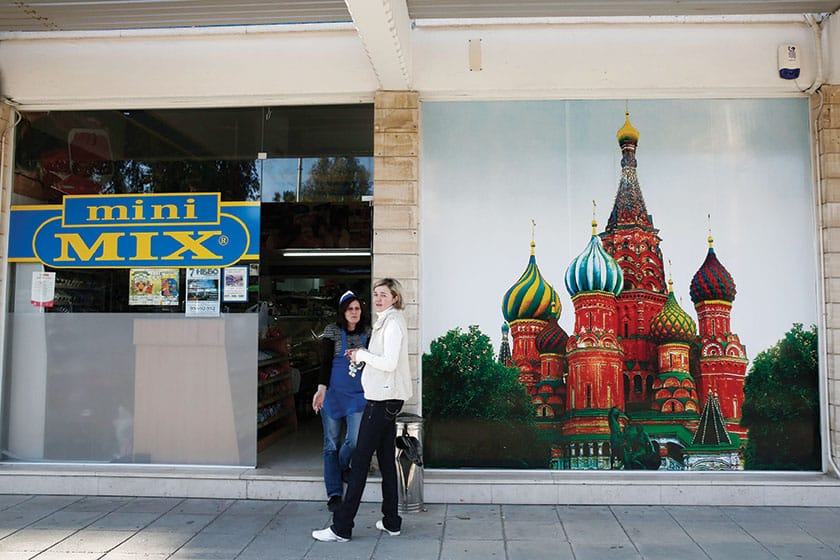 Sixty of Russia’s top entrepreneurs have cleared a space in their packed diaries for a dinner in Moscow tomorrow evening where President Anastasiades will brief them on investment opportunities in Cyprus.

The event at the Ritz-Carlton – a stone’s throw from Red Square – was organised in just two weeks by the Cyprus Investment Promotion Agency (CIPA). It was delighted by the response to its dinner invitations.

“This is probably the biggest gathering of its kind in Moscow with such high calibre business people,” Christodoulos Angastiniotis, CIPA’s chairman, told the Sunday Mail.

The hotel’s décor, according to its website, reflects the splendour of 19th Century Imperial Russia. And the dinner Cyprus is hosting there reflects the close economic, diplomatic and cultural ties that bind Russia, a world power with a population of 144 million, to a small island of one million people.

Flanked by his ministers of foreign affairs, finance and transport, Anastasiades is expected to pay tribute to the long-standing, firm and friendly relations between Nicosia and Moscow at all levels: political, business and people to people.

He will tell the assembled Russian entrepreneurs that Cyprus deeply appreciates their support – and that of the island’s vibrant Russian business community – in good times and bad.

And he is expected to reassure Russia’s business community that it can rely on Cyprus as a reliable and trustworthy partner both in political and business terms.

And while Cyprus, as a EU member, has abided by the bloc’s sanctions against Russia over Ukraine, it has used its voice in Brussels to call for easing them.

In effect, the friendship is mutually beneficial. Russia and its economy act as a catalyst for the growth of Cyprus’ economy – while Cyprus provides a gateway for Russia to Europe, Asia and the Middle East.

Anastsasiades will then get down to business, outlining opportunities for Russian investment and collaboration in innovation, technology, health, education and energy.

The groundwork was laid earlier this month in Nicosia at the 10th summit of the Cyprus-Russia Intergovernmental Commission for Economic Cooperation. The two countries signed a protocol outlining the possibilities and prospects for expanding cooperation in innovation, industry, medical services, transport, telecoms and information technology.

The message Anastasiades brings to Moscow that Cyprus is entering a new period of stability and growth was boosted on the eve of his departure on Saturday by Fitch Ratings. It upgraded the island’s long-term debt in foreign currency by one notch to ‘BB’, one upgrade short of an investment-grade rating. The “outlook is positive,” Fitch announced. “The economic recovery has broadened, and GDP growth has consistently outperformed forecasts over recent years.”

CIPA’s director general, Natasa Pilides, will deliver a presentation – entitled “Advancing our Strategic Partnership” – that summarises Cyprus’ attractions for Russian investors. These include the low cost and ease of doing business, and access to talent, funding and markets. She will outline new opportunities in research and development, ICT, health and digital health and energy.

CIPA will also discuss private investment projects with companies in meetings arranged by Russia’s Ministry of Economic Development, and visit the Skolkovo Innovation Centre. This is a sprawling new tech hub 10 miles from Moscow that is billed as Russia’s Silicon Valley.

Skolkovo’s core areas are information technology, energy efficiency, biomedical innovation, nuclear technology, and space and telecommunications. It is home to hundreds of start-ups in everything from IT, biomedicine, green energy, robotics and radiation technology.

The CIPA team will meet directors of some of these fields “to look into the potential for cooperation and for gaining more know-how and expertise in innovation,” Pilides said.

Both Anastasiades and CIPA need little introduction in Moscow. Most Russians they will meet know of the island from friends or relatives in Cyprus, which is home to a flourishing 40,000-strong Russian-speaking business community. And 782,000 Russian tourists – a record number – visited Cyprus last year. According to those in the hospitality sector, they spend more than British holidaymakers and are less fussy than German ones.

Economic ties date back decades to when Cyprus swapped wine in bulk with the Soviet Union in return for tractors. Russian businessmen arrived in Cyprus in the early 1990s after the collapse of communism. The island provided a first step into the capitalist world. Their path was smoothed by cultural, historical and Orthodox Christian ties. In those days when few Russians spoke English, a significant minority of Cypriots knew Russian, having studied at universities in the former Soviet bloc.

Today, the flow of students is in both directions. Many from Russian-speaking countries attend universities and medical schools in Cyprus, whose fast-growing tertiary education sector is attracting foreign interest and investment. University degrees from Russia and Cyprus are mutually recognised.

Russians feel genuinely welcome in Cyprus. This is not always the case in other EU countries where Russian expatriates complain of rising anti-Russian sentiment in the wake of the crisis in Ukraine three years ago.

Ordinary Cypriots and the island’s media are well-disposed to Russia as are politicians of all hues, while the Cyprus Orthodox Church enjoys close ties with its Russian counterpart.

“Cyprus is a home away from home for Russians,” says Angastiniotis. “They feel welcome, they like the weather, they feel secure – and they see the business potential.”