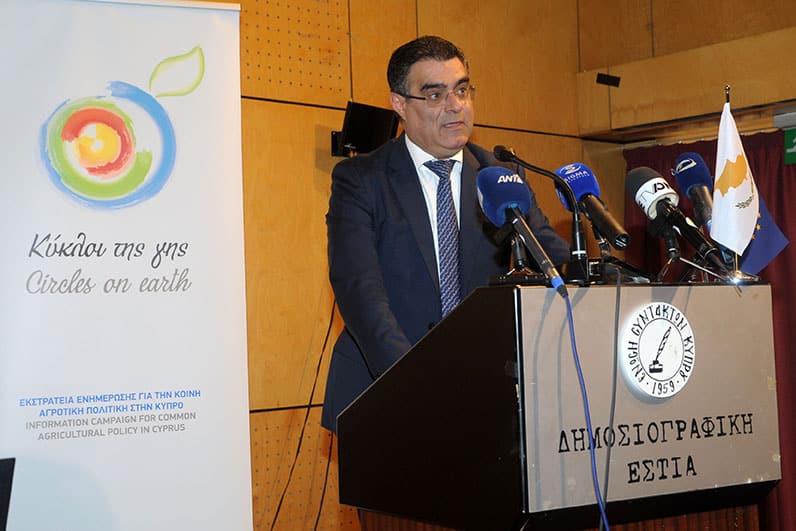 The latest statistics suggest a bright future not just for Cyprus’ economy but also for the local primary economic sector, which shows annual leaps of growth, Agriculture Minister Nicos Kouyialis said on Monday.

In his address to a news conference marking the start of an awareness campaign for the European Union’s common agricultural policy (CAP) in Cyprus, Kouyialis said that while in 2014 the gross domestic product of agriculture in Cyprus was €321 million, it reached €360 million in 2016, which translates to a 12 per cent increase in three years.

“The same data shows something equally important: during the tough years of the financial crisis, the primary sector – agriculture, animal farming and fishing industries – have stood in support and contributed to the other economic sectors, offering jobs, income and foreign currency to the economy,” Kouyialis said.

“Today, the sector is in a growth trajectory and the gloomy years have gone for good.”

According to Kouyialis, during the five years since taking over, the government has laid down the groundwork to modernise and reorganise the agriculture sector, with a view to promoting green economy and sustainable development, aspiring to even better results by optimal utilisation of the opportunities in the new CAP from 2021 to 2027.

Although Cypriot farmers are faced with multiple challenges, including Cyprus’ distance from international market centres, the impact of climate change and the limited land at Cypriot farmers’ disposal, the government’s quality-focused policies and the effort to register all traditional products as geographical indications “will create added value to our country’s agricultural products”, he said.

“At the same time, registering agricultural products creates conditions for real growth in rural areas, as it supports the creation of new small-to-medium businesses, creates new jobs and enhances our farmers’ income,” the minister said.

Meanwhile, Kouyialis said total investment through CAP in Cyprus is expected to surpass €485 million for the 2014-2020 period.

During this period, the agricultural development programme (ADP) is expected to inject approximately €243 million into the economy.

The head of the awareness campaign, Stamatia Zisiadou, said that the ADP funds actions to modernise agricultural and animal-farming processes, support new farmers and promote biological and traditional cultivation.

Through CAP, she added, Cyprus aims to tackle significant challenges, such as the lack of specialised personnel, the lack of young farmers and the need to modernise and create economies of scale for more and better production.

Widow of slain US soldier: Trump call ‘made me cry even worse’