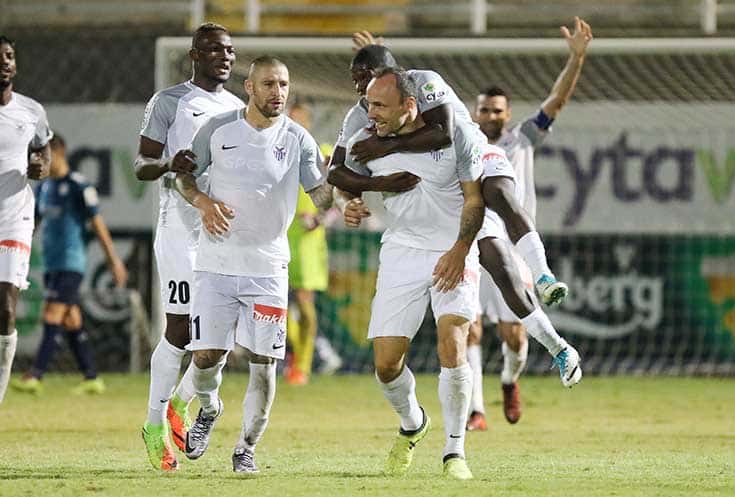 League frontrunners Anorthosis maintained their two-point lead at the top over AEK with a hard fought 2-1 win over Ethnikos Achnas, while AEK defeated champions Apoel by 3-1.

Pafos FC and Doxa Katokopias continued their impressive start to the season by crushing Nea Salamina and Alki respectively, while Apollon and Omonia registered narrow 1-0 wins over Aris and AEL.

AEK could not have expected such an easy afternoon against Apoel as they bossed play for most of the game with consummate ease. Their defence was rarely troubled while their goalkeeper Pablo was called into action on just one occasion (other than the goal he conceded) during the 90 minutes.

The champions, for yet another game, were poor, predictable and bereft of any attacking options. The expensively assembled squad appeared more like a team struggling for its first division survival rather than a championship challenger.

Two more players (Embezilio and Lago) were also added to their already long (10 in all) injury list making the job of their manager even more testing.

Even though Apoel managed to pull a goal back just after the hour mark through their young Hungarian Roland Sallay, they failed to create any worthwhile chance from there on and even conceded a third six minutes from the end after Acoran raced into the box and fired past Apoel’s keeper Raul Gudino.

Anorthosis had to battle hard against Ethnikos Achnas and had their towering central defender Gordon Schildenfeld to thank for as for the second consecutive game he scored and salvaged points for his team.

Palanka had given Anorthosis the lead but a brilliant solo effort by Ethnikos’ Kipiani brought the game level before Shildenfeld blasted in the winner six minutes from the end.

After going three games without a win Omonia managed to defeat AEL and put an end to their poor run.

The only goal of the game was scored by Gonzales in the 74th minute.

AEL should have equalised three minutes from the end but Aldair failed to beat Omonia’s keeper from close range.

Pafos FC scored four against hapless Nea Salamina and continued their march to the top of the table.

Bruls opened the score for the Pafos team in the first half, while three second hand goals by Fylaktou, Roguljic and Deul made sure of the three points that keeps them in third place.

Just behind them are Doxa who thumped five past Alki.

All goals were scored in the second half, with Nils Zatl getting a hattrick with Tiago Gomes and Berat Zadik also getting on the scoresheet.

Alex da Silva gave Apollon the three points against Aris, with a fierce drive mid-way in the second half.

Apollon were by far the better side and squandered a number of chances to make the game safe even before the end of the first half.

In the final weekend game Olympiakos doubled their wins thanks to a very late goal against Ermis Aradippou.

The Nicosia team took the lead just before the hour mark only for Tsoumou to equalise in the final minute of normal play before Samaras struck from the penalty spot for Olympiakos in the fifth and final minute of added time.

A full midweek programme is on the cards in the next few days, with Doxa taking on AEK at home (18:00) and Omonia facing Nea Salamina (20:00) away on Tuesday.