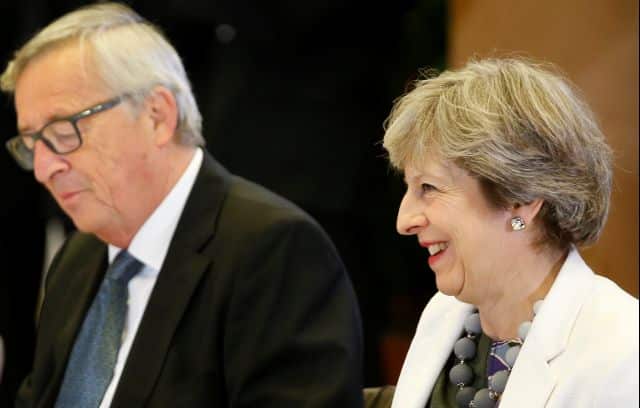 Another unflattering account of Theresa May at dinner with Jean-Claude Juncker has appeared in a German newspaper and sparked a Twitter spat between aides past and present to the British prime minister and EU chief executive.

After a summit last week at which EU leaders sought to build trust with May to try to speed up Brexit talks, Juncker’s chief-of-staff denied an accusation levelled on Twitter by his former counterpart in May’s team that he was the source of a leak about the British prime minister — as many suggested he was after a previous dinner six months ago.

Martin Selmayr called the story an attempt to “frame” him and to sour relations between Juncker and May.

London was irritated that after a Downing Street dinner in April, the Frankfurter Allgemeine Zeitung reported that Juncker thought May “in another galaxy” with her demands for EU favours from the European Union after Britain leaves in 2019.

The same newspaper said on Sunday that Juncker found her “despondent” last week and “pleading” for EU help to bolster her against her party rivals.

Nick Timothy, who resigned as May’s chief-of-staff after she lost her parliamentary majority in an ill-judged snap election in June, tweeted that Selmayr was the newspaper’s source: “After constructive Council meeting, Selmayr does this,” he wrote. “Reminder that some in Brussels want no deal or a punitive one.”

Selmayr snapped back saying that neither he nor Juncker made the reported comments. “I deny that 1/we leaked this; 2/Juncker ever said this; 3/we are punitive on Brexit,” he wrote.

“It’s an attempt 2 frame EU side & 2 undermine talks … This is false. I know it doesn’t fit your cliché, @NickJTimothy. But @JunckerEU & I have no interest in weakening PM.

“But it seems some have interest in undermining constructive relations @JunckerEU & PM May. Who? is the real question.”

Sunday’s report was by the same journalist, respected for his access to Juncker’s entourage, whose story on April’s dinner was dismissed by May at the time as “Brussels gossip”.

EU officials did not deny the accuracy of that account of the earlier meeting. Officials on both sides said it did little to foster an atmosphere of trust needed to reach a deal and which prompted reports that German Chancellor Angela Merkel was also irritated by the leak for the same reason.

On Friday, EU leaders moved to speed up talks and spoke of opening a new phase in December. Some said they understood May’s difficulties in forging consensus in London.

On Sunday, the FAZ said Juncker found May “anxious, despondent and disheartened” when they met for dinner in Brussels last Monday. Speaking of internal party plots to bring her down, the paper added: “May said she had no room left to manoeuvre. The Europeans have to create it for her.”

“May’s face and appearance spoke volumes, Juncker later told his colleagues,” the FAZ said. “She has deep rings under her eyes. She looks like someone who can’t sleep a wink.”

Never too old to get up and go