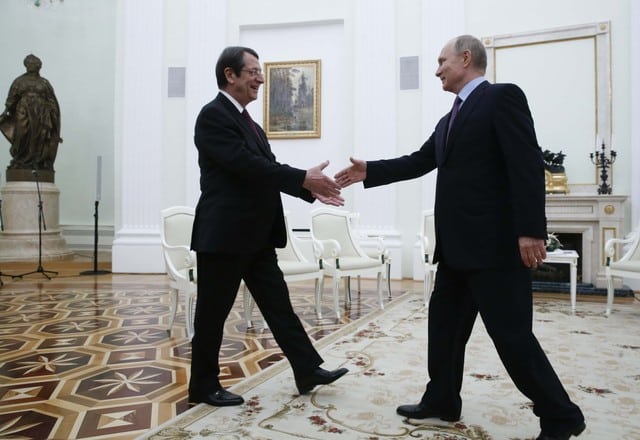 Anastasiades, in Moscow on an official visit, met Putin at the Kremlin, where they reaffirmed ties between the two countries.

Anastasiades said he discussed a wide range of issues with Putin. Tuesday’s consultations were “especially constructive and creative”, he said, with the aim of deepening relations and cooperation on all sectors.

“Our relations are based on common cultural, spiritual and religious values, which have been expanded and strengthened significantly in recent years in the areas of political, economic and defence cooperation,” Anastasiades said.

The president was greeted by Putin and they held a tete-a-tete ahead of a meeting between the full delegations from both sides.

The two heads of state signed a joint action programme for the years 2018-2020, while ministers of the Russian and Cypriot governments signed bilateral agreements, a Memorandum of Understanding and a Joint Declaration.

Also, a Joint Declaration was signed between the Republic of Cyprus and the Russian Federation to co-operation in the field of modernising the economies.

On the sidelines of their meeting, Anastasiades awarded Putin the Grand Collar of the Order of Makarios III, which is the highest order of merit awarded by Cyprus. 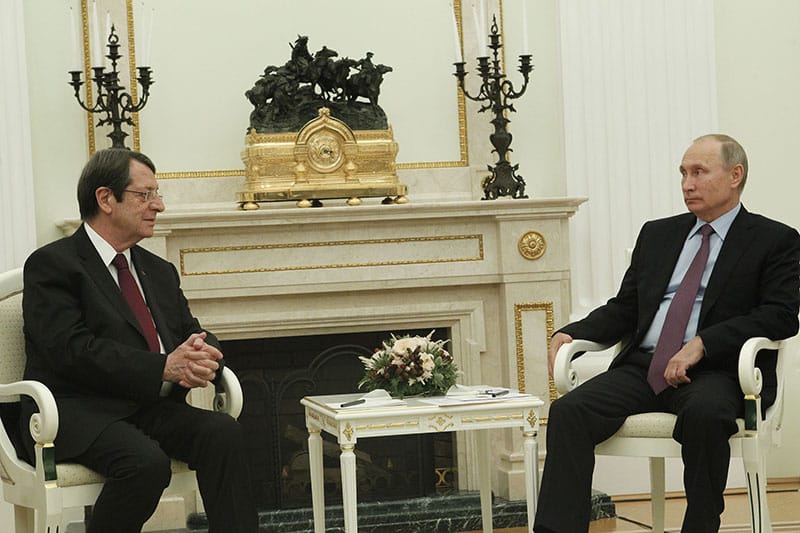 Welcoming Anastasiades, Putin said relations between Cyprus and Russia were developing positively, noting that ties go back a long way. He said Russia was always in favour of a just solution of the Cyprus problem and added that the Soviet Union was the first country to recognise the independence of the Republic of Cyprus in 1960.

On his part, Anastasiades referred to the historical, cultural and religious ties between Russia and Cyprus, adding that cooperation between the two countries was excellent.

“There is no doubt that we will see how we can, through our cooperation, serve the best interests of our peoples,” he said.

He expressed the gratitude of the Cypriot people and the Cyprus government “for the consistent and stable support of Russia that is based on principles with regard to a solution to the longstanding Cyprus problem.”

Anastasiades said the two countries signed a total of seven agreements, bringing to 67 the total number signed between Cyprus and Russia.

In Tuesday’s meeting Anastasiades and Putin discussed the Cyprus problem, bilateral relations, EU-Russia relations, and international and regional issues with emphasis on the eastern Mediterranean, Ukraine, Syria and the crisis in the Korean peninsula.

“EU-Russia relations are of strategic importance and we believe that cooperation between Brussels and Moscow on crucial international issues is becoming increasingly imperative. Therefore, we should all work to create those conditions that will pave the way for full re-establishment and further deepening of EU-Russia relations,” Anastasiades said.

As regards the Cyprus problem, Anastasiades reiterated his readiness for a continuation of the bicommunal dialogue and stressed the need for preparing the ground for a new Conference on Cyprus.

In his statements, Putin said Moscow appreciates the intention of the Cypriot side and President Anastasiades to deepen and promote close ties with Russia, adding that this cooperation is intensive. 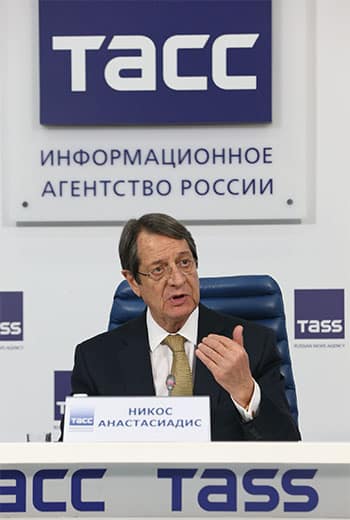 He said in the agreements signed particular attention was paid to trade and economic cooperation between Russia and Cyprus, and said the unfavourable global circumstances and external constraints, based on political decisions, had a negative impact on this economic cooperation. Putin said that bilateral trade grew by 36 per cent in the first eight months of this year, following efforts of the two countries.

He also said they discussed the prospects for cooperation in the fields of innovation, energy efficiency, medicine, pharmacy and the supply of Russian aviation and ship-building instruments to Cyprus.

The Russian president said that the direct contacts of representatives of the business community of the two countries are of great importance and said that in Cyprus there are branches of major Russian banks such as VTB, Gazprombank, Promsvyazbank.

Thanks to these banks the full range of financial investment transactions are made possible, Putin said.

He also said there are prospects for military-technological cooperation.

Referring to tourism, he said that Cyprus is one of the most popular destinations for Russian tourists and said last year more than 800,000 Russians visited the island, while in the first nine months of 2017 the number exceeded 700,000.

Putin also stressed the position of the Russian Federation in favour of achieving a comprehensive and just solution to the Cyprus problem, on the basis of the UN Security Council resolutions and the agreements of the Cypriot sides themselves.

“We consider it important that the final solution be found by the Cypriots themselves without the imposition of ready recipes and pressures from outside,” he said.

The Russian President, after noting that Cyprus is close to the Middle East region, said he briefed Anastasiades on Russia’s efforts to fight terrorism in Syria and on the need to restore the Christian element in the region.

Djokovic, Wawrinka to return to action in Abu Dhabi