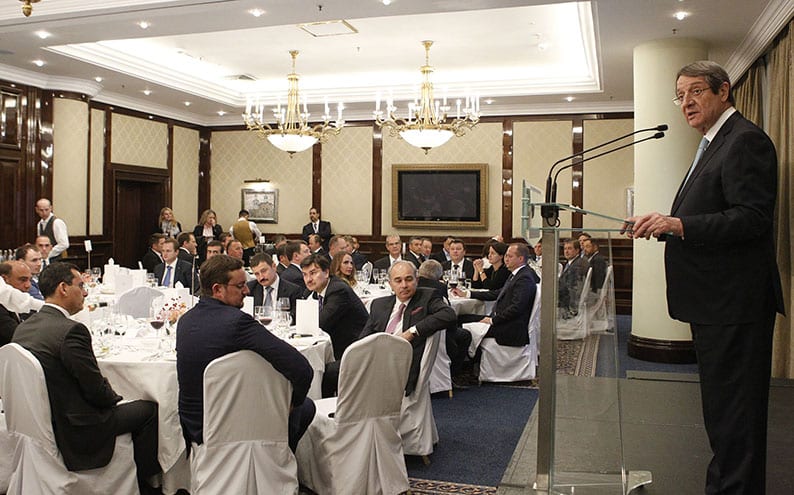 President Nicos Anastasiades will on Tuesday conclude his two-day working visit to Moscow with a meeting with his Russian counterpart Vladimir Putin, which will be followed by the signing of bilateral agreements between the two countries.

Anastasiades and Putin are expected to discuss mainly political issues, such as the Cyprus problem and Russia-EU relations.

The two Presidents will sign a Joint Action Plan for the period 2018 – 2020 between the Republic of Cyprus and the Russian Federation, that will cover all areas of cooperation, including politics, the economy, commerce, energy, defence, international issues and EU affairs.

Ministers from the two countries will sign agreements on maritime transport, on international road transport, on communications and information technology, and on cooperation during humanitarian operations performed in case of crisis management situations.

Additionally, a Memorandum of Understanding will be signed between the ministry of justice and public order and the prosecutor-general’s office of the Russian Federation and a joint declaration between on cooperation in the sphere of modernisation of the economies.

Cyprus and Russia have already signed 60 bilateral agreements, of which 12 were signed during President Anastasiades’ official visit to Moscow in 2015.

Anastasiades` meeting with Putin at the Kremlin is expected to begin at 2.40pm local time. At first four-member delegations of the two sides will meet under the two presidents. This will be followed by talks between 12-member delegations under Anastasiades and Putin that are expected to last for one and a half hours. Later the two presidents will make statements to the media.

According to Russian news agency Tass, Anastasaides said relations between Russia and Cyprus are at an excellent level.

He noted that this was his third visit to Russia over the past five years and “the second visit that includes high-level meetings.”

“I may say that this visit is in the framework of those fine relations between the Republic of Cyprus and the Russian Federation,” Anastasiades told Tass.

The goals of the visit are to “consider the prospects of further development of relations between the two countries, discuss relations of Cyprus with the Russian government and the Russian president.”

“We want to inform the Russian leadership about the recent developments in the Cypriot issue, discuss issues related to the ties of the European Union and Russia, essential regional issues and the possible role of Cyprus in solving them,” the president said, stressing that Cyprus is part of a “very sensitive and vulnerable region of the world.”