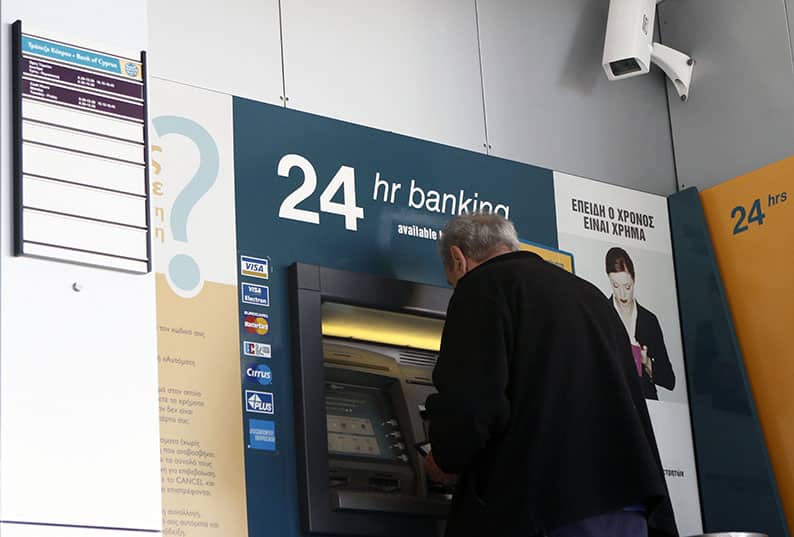 In an interview, an economist said that while introducing technology could help reduce branches and workers, and ultimately save costs, they are reluctant to do so as Cypriot customers are less enthusiastic about being serviced by machines than other European consumers.

While the ratio of population per branch almost doubled from 852 in 2008 to 1,568 last year, it is still well below the euro area average of 2,278, the ECB said in its Report on Financial Structures on its website. The third lowest is that of Spain with 1,613 followed by France with 1,794 persons per branch. The highest ratio is Estonia with a ratio of 13,292 inhabitants per branch, followed by the Netherlands and Latvia with 10,173 and 7,512 respectively.

Further, the number of inhabitants per bank worker stood at 80 last year, against 22 in Luxembourg where bank workers manage five times as many assets than their Cypriot colleagues, the ECB data showed. In fact, Cypriot bank workers managed last year on average €8.1m, the fifth lowest amount in assets per employee in the euro area, only beating their colleagues in the three Baltic republics, Slovakia and Slovenia. On average, a bank worker in the euro area manages €15.2m almost twice as much as a Cypriot banker.

In addition, Cyprus had the fourth lowest ratio of inhabitants per credit institution last year, 15,798 compared to 67,341 in the euro area, which partly reflects the operation of a large number of – meanwhile merged- cooperative credit companies, the ECB data show. In 2008, Cyprus’s population per credit institution ratio was 4,826.

The number of independent co-ops stood at 98 in 2008, before it they were reduced to merely 18, all operating under the umbrella of the Cooperative Central Bank, which was renamed earlier this year to Cyprus Cooperative Bank. Currently, there are nine domestic banks operating in Cyprus, three subsidiaries from EU banks, two subsidiaries of non-EU banks, seven branches of an equal number of EU banks, 15 branches of non-EU banks and two representative offices of two banks, according to the Central Bank of Cyprus. The Cypriot banks include also the legacy Cyprus Popular Bank which is currently in resolution, and the branch of Tanzania’s FBME Bank which lost its licence two years ago.

Economist and banker Marios Clerides, who holds a seat on the board of directors of Ancoria Bank, the youngest Cypriot lender, said that the ECB figures do not necessarily allow comparisons as they, in the case of Cyprus, also include the number of workers, branches and banks dedicated to servicing the bank customers from abroad transacting via the Cypriot banking system. The business volume generated by this type of operations is not included in the banks’ balance sheet, hence the comparably lower assets per worker ratio, he continued.

In addition, the data also reflects that receiving anonymous service from a bank worker “is not in the nature of Cypriot bank customers,” he said. “There is a social explanation behind that. They prefer face-to-face interaction with bank workers, hence the large number of bank workers and branches”.

Clerides who stepped down as the Co-op’s top executive in 2015 after serving earlier at Hellenic Bank added that switching to electronic banking could come at a cost in the form of “customer loyalty and customer information” for some Cypriot lenders, especially in the case of older clients, less familiar with technology.

He also said that banks could benefit from a gradual phasing out of cheque payments in favour of electronic payments which could help reduce their size and overheads. “There’s nothing more diabolical than cheque clearing,” he said adding that the procedures involved are labour-intensive and costly.

Clerides, who was commenting in his private capacity, said that a possible consolidation of the banking system through mergers may not necessarily allow the consumer to benefit from possible efficiency gains, as these could be offset by reduced competition. In addition, he added, the experience of the past showed that bank mergers in Cyprus sparked cultural clashes among staffers.