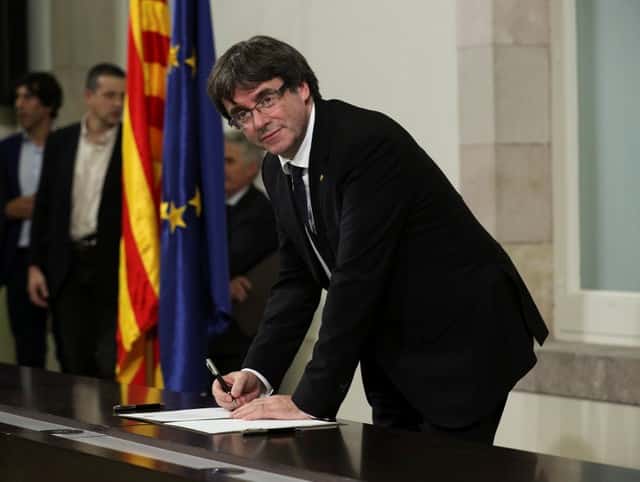 Catalonia’s leader cannot solve its political crisis with Madrid just by calling regional elections, Spain’s justice minister said on Tuesday, dampening hopes of a quick fix for a dispute that has rattled investors and fractured the country.

The Spanish government says it will impose direct rule on Catalonia from Friday to counter an illegal independence push, invoking never-before-used powers to fire the government of the northeastern region that is critical to the country’s economy.

The Catalan parliament will meet on Thursday to agree on a response to Madrid, something many analysts said could pave the way for a formal declaration of independence.

Secessionists in Catalonia say that an independence referendum held on Oct 1 – which drew only a 43 per cent turnout and was mostly shunned by Catalans who wish to remain in Spain – has accorded them a mandate to claim statehood.

Catalonia said on Monday it was confident all officials including police would defy attempts by Madrid to enforce direct rule, raising fears among Spain’s European allies of separatist contagion affecting other parts of the continent.

Spanish political leaders, influential business lobbies and most Catalonia newspapers have urged Puigdemont to call a regional election before he is stripped out of his authority.

They say direct rule from Madrid, which was the norm during the dictatorship of Francisco Franco, would be a humiliation for Catalonia and pose a serious risk of social and economic unrest.

Puigdemont has remained silent on the matter of elections. Some of his senior advisers have said holding a vote is a possibility while others have ruled it out. His pro-secession allies are also divided.

The Spanish government said a snap election would be a first step but Puigdemont would also have to withdraw an ambiguous declaration of independence he made earlier this month.

“When the government proposes an option so extreme as Article 155 (powers to cancel Catalonia’s autonomous status), it’s because we believe that there has been a serious failure by Puigdemont to meet his obligations,” Justice Minister Rafael Catala said during a radio interview.

“Everything is not fixed just by calling an election.”

Catala said that if Puigdemont appeared before the Spanish Senate, which plans to authorise direct rule on Friday, it would be a positive step in finding a solution to the conflict.

The Madrid government has refused to meet with the Catalan leader until he drops the call for independence, however, and Catala said any appearance by Puigdemont had to be within a legal and constitutional framework.

“If his appearance is within the constitution and the law we’ll be delighted…But if it’s just to ratify his position on Catalonia’s independence, sadly we will not be able to do anything else than continuing with the measures already set by the government,” said Catala.

US companies act on climate despite Trump – survey

After a long, cold year, investors are flocking back to Europe