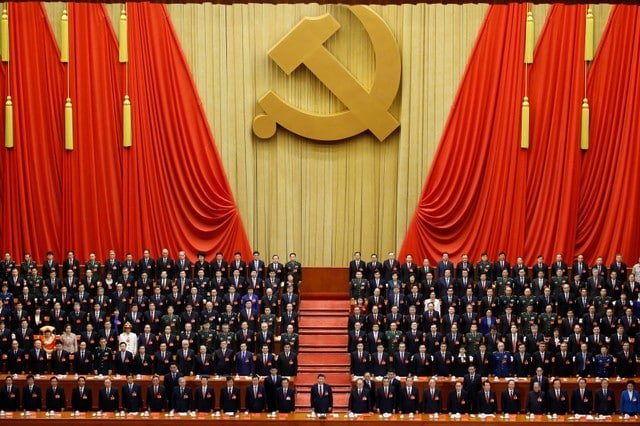 China‘s ruling Communist Party enshrined President Xi Jinping’s political thought into its constitution on Tuesday, putting him in the same company as the founder of modern China, Mao Zedong, and cementing his power ahead of a second five-year term.

A key Xi ally, top corruption fighter Wang Qishan, will not be on the new Politburo Standing Committee, the apex of power in China, to be revealed on Wednesday as he was not among those named on Tuesday to the 204-member Central Committee.

Whether or not the powerful Wang would remain on the Standing Committee, which currently has seven members, despite being beyond the customary retirement age of 69, had been among the key questions to be answered at the week-long party congress, which ended on Tuesday. Wang could still assume another senior role over the next few months.

As expected, the party unanimously passed an amendment to include “Xi Jinping Thought on Socialism with Chinese Characteristics for a New Era” as one of its guiding principles.

The party will announce its new Standing Committee, headed by Xi, at around midday (0400 GMT) on Wednesday, culminating a twice-a-decade leadership reshuffle.

As expected, the amended constitution affirmed that Xi’s signature fight against corruption, which has ensnared more than 1.3 million officials, will continue.

Unexpectedly, Xi’s ‘Belt and Road’ initiative, an ambitious programme to build infrastructure linking China with its neighbours and beyond, was also included in the party constitution.

Also included was a commitment to supply-side industrial reforms, and giving play to the “decisive role” of market forces in resource allocation, a commitment Xi had made early in his first terms that many investors say he has failed to deliver on.

“The party exercises overall leadership over all areas of endeavour in every part of the country,” the party said in a statement reflecting Xi’s ongoing efforts to strengthen the party and its place in contemporary Chinese society.

If no clear successor to Xi is named to the new Politburo Standing Committee, it will further fuel speculation that Xi may look to retain power beyond the customary second five-year term.

“This is about further erasing any distinction between Xi Jinping and the party,” said Jude Blanchette, who studies the party at The Conference Board’s China Center for Economics and Business in Beijing, referring to Xi’s thought getting into the constitution.

“Add on to this having supply-side structural reform and One Belt One Road written into this, which were Xi’s signature policies, this makes questioning or non-compliance with those tantamount to betrayal of the party.”

THE MARKET AND THE PARTY

“To build a market economic system in such a big country, it’s impossible without the leadership of the party,” he said.

Others have argued that the two are contradictory.

“When you put ‘supply-side reform’ and ‘market playing a decisive role’ in the same document, then that just shows they have to almost choose one,” said Alex Wolf, Senior Emerging Markets Economist with Aberdeen Standard Investments in Hong Kong.

China‘s blue-chip shares climbed to a 26-month high on Tuesday, led by infrastructure and property stocks, as Xi wrapped up a congress that began with his three-and-a half hour speech envisioning a more prosperous, confident China. The yuan strengthened against the dollar.

Xi rapidly consolidated power after assuming party leadership in late 2012 and then the presidency the next year. The party gave Xi the title of “core” leader a year ago, a significant strengthening of his position.

Whether Xi was able to have his name “crowned” in the party constitution had been seen as a key measure of his power, elevating him to a level of previous leaders exemplified by Mao Zedong Thought and Deng Xiaoping Theory.

No other leader since Mao has had an eponymous ideology included in the document while in office. Deng’s name was added after his death in 1997.

A list of 133 committee members for the Central Commission for Discipline Inspection released on Tuesday included Zhao Leji, who heads the party’s Organisation Department, a strong sign that he will take over from Wang as anti-corruption chief.

The constitutional amendment, along with Xi’s work report and a work report of the graft watchdog to the congress, were passed by a show of hands.

When Xi next asked for any ‘no’ votes or abstentions for the amendment or two work reports, the sound of “none” echoed throughout the chamber, as officials shouted out from different sides of the hall.