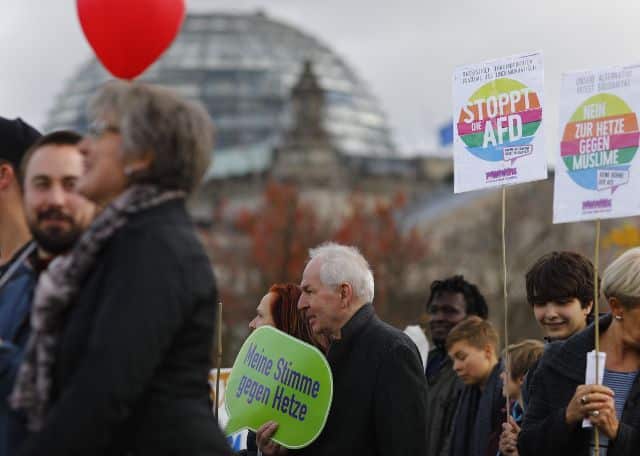 The far-right Alternative for Germany (AfD) is set to clash with other parties over its nomination for a senior parliamentary post when the Bundestag meets on Tuesday for its inaugural session after last month’s election.

The AfD won seats in the national parliament for the first time in the Sept. 24 ballot, hurting Chancellor Angela Merkel’s conservatives and leaving her with little choice but to try to forge a three-way coalition.

At Tuesday’s session of the lower parliamentary house, outgoing finance minister Wolfgang Schaeuble can count on broad support for his appointment as Bundestag president, or speaker. Lawmakers will then vote on six vice presidents – one from each party group.

For its vice president, the AfD has nominated Albrecht Glaser, 75, who has called Islam a political ideology rather than a religion, and said Muslims should not have the right to freedom of religion as Islam did not respect that freedom.

The Social Democrats, Greens, the pro-business Free Democrats (FDP) and the radical Left Party have spoken out against Glaser’s nomination.

Andrea Nahles, leader of the Social Democrats in parliament, told broadcaster ZDF that Glaser had failed to correct his comments about Islam, which violated Germany’s right to freedom of religion, and dismissed his offer of dialogue as “antics”.

Glaser would not embody the values of the constitution in the way required of a parliamentary vice president, Nahles said.

On Monday, Greens co-leader Katrin Goering-Eckhardt said she would not to vote for Glaser.

“If one wants to be a Bundestag vice president, then one must respect the constitution, and that includes freedom of religion,” she said.

Senior members of Merkel’s conservative bloc have also said they will not support Glaser, though the party’s lawmakers will be free to choose how they vote.

Michael Grosse-Broemer, a leading member of the conservatives, told Bild newspaper “it will be difficult with candidates that do not accept the basic principles of the German constitution.”

Later on Tuesday, the conservatives, FDP and Greens will convene for talks on forming a coalition.

Vice presidents of the Bundestag chair sessions, set the agenda for parliamentary business and call lawmakers to order where necessary.

The convention that each party in parliament is entitled to one vice speaker is not written into the constitution, and parliamentary business can continue if the AfD is unable to get Glaser elected or find a replacement.

In the past, a party has had to nominate a second choice when its first choice was not elected. However, if the AfD failed to select any lawmaker who can win the role, it would be unprecedented.

Candidates need to be approved by an absolute majority of all sitting lawmakers, though if there is a third round of voting a candidate can win election with a simple majority of more ‘yes’ than ‘no’ votes.

Should Glaser fail to be elected a vice president in three rounds on Tuesday, voting will be postponed. A member of Merkel’s Christian Democrats (CDU) for 40 years, Glaser quit the party in 2012 and helped to found the AfD in 2013.

The opposition to his nomination demonstrates the difficulties the AfD may face in pushing its agenda – ranging from immigration and an insistence that Islam does not belong in Germany to problems it sees in the euro zone.