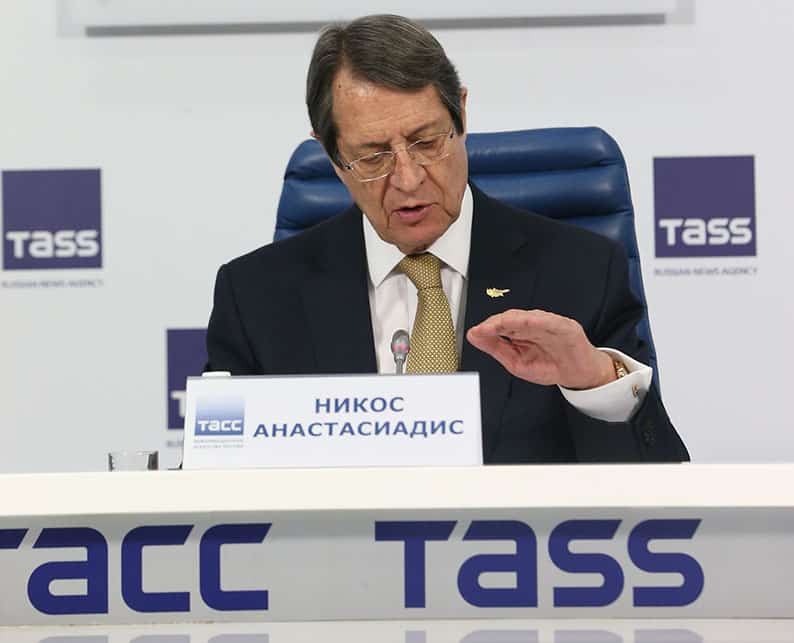 President Nicos Anastasiades said on Tuesday plans were discussed in Moscow to build a hospital in Paphos, in cooperation with Russia, where a pioneering method to treat cancer with new technology would be offered.

Speaking at a press conference at the Russian news agency Tass, attended by Russian journalists, Anastasiades said: “the aim is to build a hospital with the Russian government and other partners in Paphos.”

He said the Cyprus Investment Promotion Agency (CIPA) and he personally had shown a great interest in speeding up procedures for a licence and to overcome red tape.

Anastasiades said the aim of his visit was the review bilateral relations and brief the Russian Federation on developments in the Cyprus problem. He said the visit also provided an opportunity to discuss regional and international developments, and the role Cyprus could play.

Speaking in numbers, Anastasiades said this year 840,000 Russian tourists visited Cyprus, and that the Russian community living and working in Cyprus exceeded 35,000.

Asked about the main advantages of investing in Cyprus, Anastasiades said a series of incentives are in place to attract investments, as well as a sound economic, banking, and legal environment for companies choosing Cyprus as their base.

The president noted that this was “not just propaganda on my side, but findings by international rating agencies, which have upgraded the Cypriot economy to a pre-investment ranking.”

Cyprus, he added, offers the opportunity to investors to expand to Europe, the Middle East, and North Africa.

On the Cyprus issue, asked if the good relationship between Russia and Turkey troubled him or the people of Cyprus, Anastasiades said the relationship between Russia and Turkey “not only is not an obstacle, on the contrary it could be an opportunity for a country that can exert its influence on Turkey and understands the problem, to contribute in a positive manner in the right direction, that is to convey messages to Ankara.”

He noted that the fact Cyprus maintained good relations with Russia did not mean that Cyprus should not have good relations with the US, and that the same applied in the case of Israel with Palestine, Jordan, Lebanon, etc. The president said it was more important to maintain mutual respect and provide assistance when necessary.

“We are a member of the EU and due to these good relations, we are trying to see how we can be positive within the EU regarding EU-Russia relations. That is how international relations are built and that is how we can have more important and better results,” the president said.

Janet Jackson could perform with Timberlake at Super Bowl

Our View: The government is approaching the cultural sector in the wrong way

Pupils to abstain from class to protest lack of planning