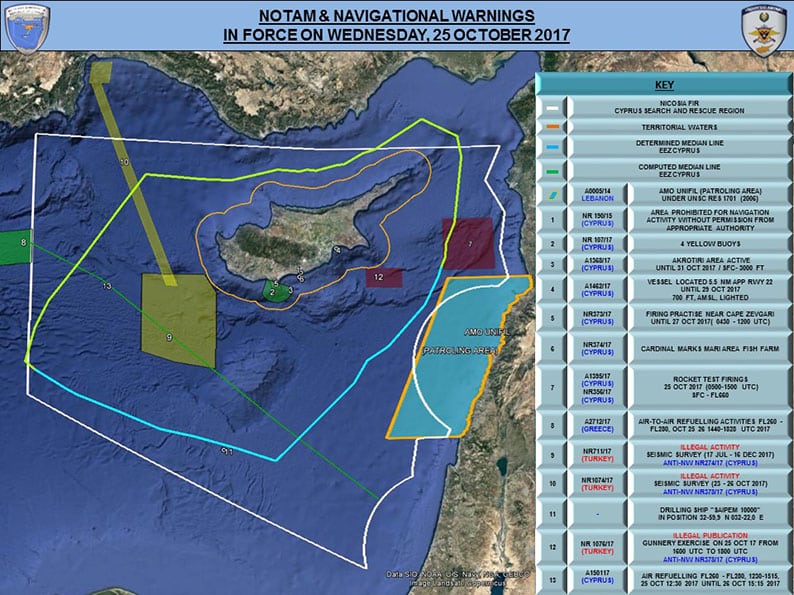 The government on Wednesday condemned Turkey’s action to hold a live fire exercise off the island’s south-eastern coast.

“It was a provocative and unacceptable action on Turkey’s behalf,” deputy government spokesman Victoras Papadopoulos said.

He said the republic had responded by issuing its own navigational warning.

Turkey said it was carrying out a gunnery exercise on Wednesday between 4pm and 6pm in an area off Cape Greco, skirting Cyprus’ territorial water boundaries – 12 nautical miles (Number 12 on the map) and inside its exclusive economic zone.

“This area is not suitable for live fire exercises and this is unacceptable,” Papadopoulos said, adding that only the Republic could issue navigational warnings

Papadopoulos said Turkey will be reported to all international organisations “while some other actions are being carried out that cannot be publicised at present.”

The Republic’s authorities issued a note to mariners warning them that Turkey’s notification had not been co-ordinated with Cyprus “and they are dangerous for the safety of navigation in the area.”

Turkey said Cyprus’ Navtex was null and void and mariners should follow its messages “for the sake of navigation safety.”

‘I have no idea why we’re here,’ Turkish activist tells trial