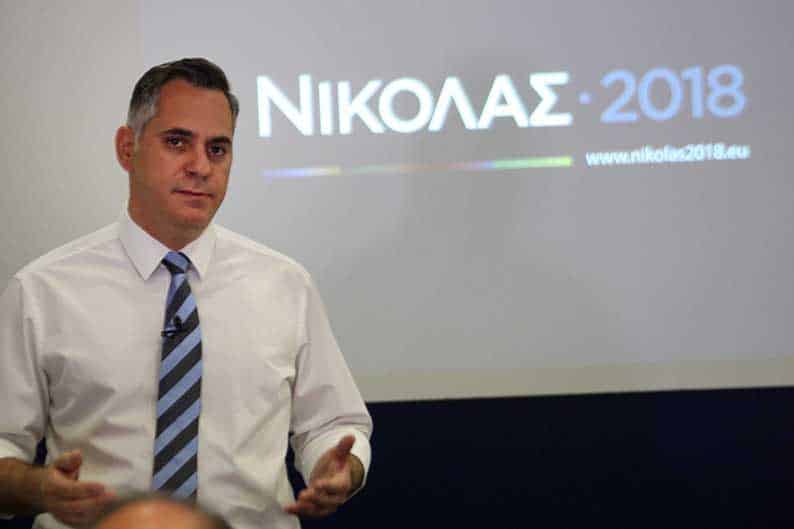 A remark by presidential candidate Nicolas Papadopoulos on the campaign trail, according to which the Turkish Cypriot leader would appoint the Greek Cypriot members of parliament after a solution to the Cyprus problem, was exposed as false on Wednesday following the release of a document supposed to corroborate the claim.

Speaking on Sunday at a campaign gathering in Chirokitia, Papadopoulos had argued that President Nicos Anastasiades made so many concessions that, if a solution were agreed, Turkish Cypriot leader Mustafa Akinci would “even get to appoint the Greek Cypriot MPs and Senators”.

Instant outrage prompted a clarification on Monday, and it turned out that he had been referring to the transition-period appointments to the legislative, judicial, and executive branches of a reunified Cyprus to be made until elections can be held.

“I have looked at the document and can confirm,” she tweeted.

“[Anastasiades] proposes that the two leaders jointly approve the officials of all institutions. Executive, Legislative, Judicial. I can’t release the document but call on [government spokesman Nicos] Christodoulides to deny.”

Deputy government spokesman Victoras Papadopoulos was soon to attack Xanthou, accusing her of lying and misinforming the public, before making his response the government’s official line in a statement.

“Following the last session of the National Council members were given a document with the convergences and divergences as recorded on March 15, 2017,” the deputy spokesman said.

“In this document, under ‘Major Divergences’ it is written in blue letters, as the proposal of the Greek Cypriot side, that each leader will be ultimately responsible for the appointment of the transitional officials from his own community.”

What Papadopoulos and Xanthou had been referring to, he added, was the Turkish Cypriot side’s proposed arrangement, documented in red.

Speaking to reporters following a cabinet meeting on Wednesday, deputy spokesman Papadopoulos said it was sad that “some cannot rise to the occasion ahead of the presidential election”.

“At some point, the election will be over. We will have a new government, a new president, and will have to manage the Cyprus problem. It is a very serious affair for the survival of Cypriot Hellenism, and so some should be much more careful, and they should read up.”

Papadopoulos expressed hope that the whole incident was “unfortunate”, meaning the Nicolas Papadopoulos campaign had misinterpreted the text it read, because “if it was intentional then things are much worse”.

On Wednesday, the Papadopoulos campaign tried to water down the claim that Akinci will have the power to approve – or veto – Greek Cypriots’ transitional appointments to government posts, releasing a letter from the president’s office dated October 7, 2016, and arguing that the agreed provisions of the solution “violate the principles of democracy at the most crucial, initial phase of its implementation”.

Attached to the letter was a document of proposals by the Greek Cypriot side, entitled ‘Entry Into Force’ and dated November 9, 2015, which supposedly contained the evidence incriminating Anastasiades.

“The leaders of the two communities, as signatories of the Settlement Agreement, will be entrusted with the overall responsibility to put in place initial holders for all positions in all institutions, bodies and officials prescribed by the Constitution,” the document of proposals said.

“Hence, the two leaders will immediately proceed, also in consultation with the political forces and other stakeholders, to fill all offices and position in all institutions of all branches of power (executive, legislative, judicial). […] The discretionary power of the two leaders will mainly concern the choice of the persons and the political officials to be part of the initial composition of bodies and institutions.”

In his statement, deputy government spokesman Papadopoulos had also referred to this document.

“The proposals submitted by the Greek Cypriot side are described comprehensively and clearly in the document entitled ‘Entry Into Force’,” he said.

“In this document, the Greek Cypriot side’s explicit proposal is that appointments will be made not only by each side’s leader but also following consultation with political parties. Therefore, what the Nicolas Papadopoulos campaign is claiming have no bearing on reality.”