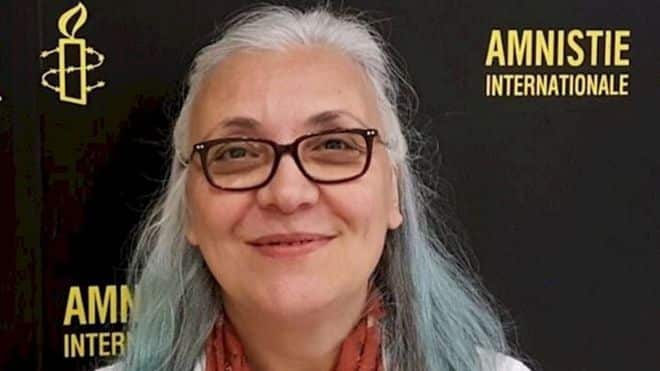 Amnesty Turkey Director Idil Eser is among those on trial

A Turkish human rights activist denied terrorism charges on Wednesday, declaring “I have no idea why we’re here”, at a trial of 11 activists that has become a flashpoint in Ankara’s tensions with Europe.

Ozlem Dalkiran was first to speak at the trial that also involves a German and a Swedish national and the local head of Amnesty International. They face up to 15 years jail if convicted.

“I dedicated my life to truth, human rights and justice. Now I am here being charged with membership in a terrorist organisation,” Dalkiran, a member of the Turkish arm of the Citizens’ Assembly, a European rights organisation, told the court.

The activists face a range of charges, including helping armed terrorist groups such as the outlawed Kurdistan Workers Party (PKK) and the network of the U.S.-based cleric Fethullah Gulen, blamed by Ankara for last year’s coup attempt.

Prosecutors have cited Amnesty’s links to jailed hunger strikers and alleged that some of the defendants had contact with people who had downloaded the encrypted messaging app used by the coup plotters.

They were detained in July after participating in a workshop on digital security held on an island near Istanbul. Pro-government media have said the workshop was part of a broader plot to sow discord in Turkish society.

Authorities have jailed more than 50,000 people pending trial in a crackdown following the failed military coup. President Tayyip Erdogan says the purges across society are necessary to maintain stability in a key NATO country bordering Iran, Iraq and Syria.

But European allies fear he is using the investigations to check opposition and undermine the judiciary.

“This is ostensibly a trial of human rights defenders attending a workshop on an island in Istanbul, but in fact it is the Turkish justice system and Turkish authorities that are on trial,” John Dalhuisen, Amnesty’s director for Europe and Central Asia, said outside the courthouse.

Eight of the defendants were held in jail ahead of the trial. Amnesty’s Turkish chairman, Taner Kilic, was jailed earlier this year in a separate case and was later added to the same indictment.

Kilic attended the hearing via a video link from a court in the western coastal province of Izmir, where he faces additional charges of using the same encrypted messaging app as the coup plotters. Amnesty rejects the charges.

The case has worsened Turkey’s already fraught relations with the European Union it aspires to join. Shortly after the arrests, Germany said it was reviewing Turkey’s applications to buy weaponry from Germany. A cabinet minister in Berlin compared Ankara’s behaviour to that of the former Communist East Germany.

German Chancellor Angela Merkel has said Turkey’s 12-year-old attempt to join the European Union should be halted, although Ankara has said it remains determined to press on with its accession process.