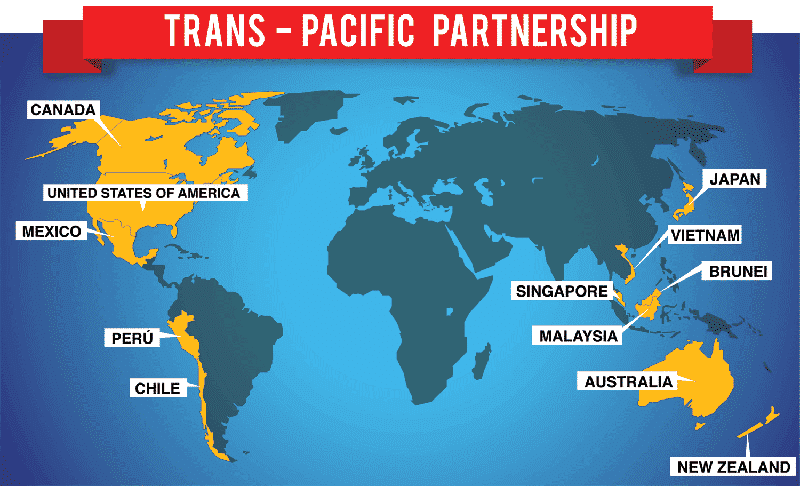 The Trans-Pacific Partnership, is a 12-nation trade agreement whose countries produce 40 per cent of the world's GDP

The administration’s single-minded pursuit of unilateralism in trade policy – as seen in the withdrawal from the TPP and seeking to rewrite NAFTA – is a recipe for disaster. The world is moving on and, ultimately, Americans will be the losers.

The Trump administration’s opening salvo in launching its “America First” trade policy was to pull out from the Trans-Pacific Partnership (TPP) —a move that many assumed effectively killed this 12-nation trade agreement comprising 40 percent of world GDP.

In rejecting a multilateral agreement such as the TPP, President Donald Trump heralded the benefits of bilateralism: one-on-one deals where the United States can leverage its overwhelming market power to win fast results at the negotiation table. And yet, that expectation has not panned out. The TPP project lives on and there are no prospects for a string of U.S.-led bilateral trade agreements to materialize anytime soon.

The real driving force of the Trump administration’s trade policy is not the rejection of multilateralism in favor of bilateralism. Rather, it boils down to ensuring that the United States enjoys near free reign in reinstating tariffs for specific products, changing the terms of existing trade agreements, and weakening dispute settlement mechanisms at the regional and global level that could be used to tame U.S. protectionism.

This much is clear from developments in trade policy during the first nine months of the Trump presidency.

First, there is heightened reliance on domestic U.S. trade laws that provide the executive branch with powers to restrict imports: stepped up anti-dumping investigations; the revival of Section 301 – where the United States reserves the right to punish what it deems are unfair trading practices of others; and the little-used Section 232, which uses national security grounds to limit imports, notably steel and aluminum.

Second, there are demands in trade renegotiations that aim to weaken legal strictures on U.S. behavior; for example, eliminating the North America Free Trade Agreement’s Chapter 19, which gives member countries the ability to establish panels to review anti-dumping actions, and the idea of making NAFTA’s investment arbitration system optional.

Third, there are actions to weaken the World Trade Organization’s dispute settlement system by stalling the appointment of new members of the appellate body until some undefined reforms take place. Triggering tit-for-tat retaliation or undermining the WTO are clear and present dangers of unilateralism.

But the United States is also going it alone in one more fundamental way: its choice of trade negotiation strategy.

The Trump administration is following a rearview mirror approach to negotiations, looking backward by reopening existing trade agreements. Hence, a redo of NAFTA and amendments to the U.S.-Korea Free Trade Agreement (KORUS).

Constructive engagement with our partners to modernize trade agreements or ensure their faithful implementation is a worthwhile endeavor. But the Trump administration is setting up these renegotiations to fail by doubling down on eliminating bilateral trade deficits as the central objective of the talks — despite the fact that the trade balances reflect larger macroeconomic forces and are not an indicator of U.S. economic health.

This misguided negotiation mandate has led the U.S. trade representative to toy with NAFTA proposals that are non-starters for Canada and Mexico or other stakeholders in Congress and the business community. For example, the trade representative is considering a sunset clause to phase out NAFTA in five years if all three parties do not move to renew it. Another clause insists on a new requirement of 50 percent U.S. content in automobiles, despite the goal of NAFTA to nurture an integrated and competitive regional production platform that awards consumers the best products at the lowest cost.

While the United States is trying to change the terms of its existing trade agreements – in ways where there is no domestic consensus or partner buy-in – governments in Asia and elsewhere are placing their bets on a new crop of large-scale, multiparty trade pacts: the Regional Comprehensive Economic Partnership comprising 16 nations in East Asia including China; the Japan-EU Economic Partnership Agreement; and a TPP 2.0.

The remaining eleven TPP member nations are engaged in a concerted effort to relaunch the project with the objective of securing an agreement in principle at the Asia-Pacific Economic Cooperation economic leaders’ summit meeting in Vietnam next month. This is certainly a tall order given the profound impact of America’s exit from the agreement. However, the negotiators have wisely chosen a formula — temporal suspension of some of the TPP disciplines until the U.S. returns to the agreement — that allows them to reconcile their two most fundamental objectives: to persuade reluctant parties to stay on despite diminished economic gains by rebalancing concessions and to encourage the United States to come back by keeping the option of reverting to the original agreement.

How, when, or if ever the United States will rejoin the TPP is anyone’s guess. But U.S. leadership has already taken a toll. Some of America’s closest partners and allies are now moving forward in an effort to create market opportunities that do not include America. The nation’s losses are bound to multiply. If NAFTA unravels, American farmers and ranchers will lose market access to some of their top clients. Factory workers will be made redundant as well. By one estimate, just in the auto parts sector, a U.S. pullout from NAFTA would put 50,000 jobs in jeopardy.

Unilateralism is not a recipe for American success; rather it makes Americans losers. Mireya Solís is a senior fellow in the Foreign Policy program at the Brookings Institution, where she is a co-director of the Center for East Asia Policy Studies and holds the Philip Knight Chair in Japan Studies. Her main research interests include Japanese politics, political economy, and foreign policy. Her most recent book, Dilemmas of a Trading Nation: Japan and the United States in the Evolving Asia-Pacific Order, was published by the Brookings Institution Press in August 2017.

This article first appeared on TheMarkNews

Take a walk on the wild side